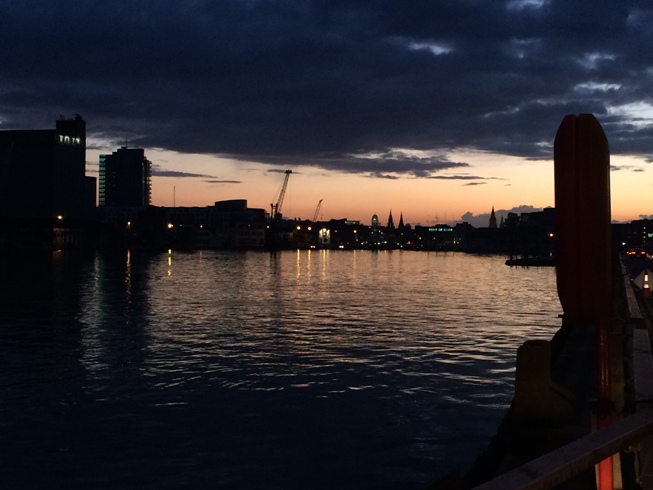 Cork’s Regional Technical College, the biggest in the country, representing a public investment of nearly £3 ½ million, was officially opened today by An Taoiseach, Mr Lynch three years after parts of the college began to be used. Since its unofficial opening the number of day students had risen to 3,000 with almost 1,000 evening class students and a teaching staff numbering almost 200 (Evening Echo, 31 December 1977, p.1).

With the wheels of education moving, and the Cork School of Art in the process of relocating to the Crawford Tech, attention turned to having an official opening of the Cork Regional Technical College. On 30 December 1977 three years on since its first enrolments, Cork born Taoiseach Jack Lynch received an enthusiastic reception on arrival at the college. The Irish Press, Cork Examiner and Evening Echo all record a large attendance. The college was blessed by the Bishop of Cork and Ross, Cornelius Lucey. A plaque made by Cork sculptor Ken Thompson commemorating the opening was unveiled by the Taoiseach after the tape-cutting ceremony. Among the large attendance were the Lord Mayor of Cork Cllr Gerald Goldberg and the principal Mr J P Roche. At a luncheon in Blackrock Castle later many tributes were paid to the retiring CEO Patrick Parfrey and among the presentations made to him was an illuminated address by Cork graphic artist Tadhg Lehane and his portrait painted by Frank Sanquest.

Lynch in his speech at the RTC noted that the public expenditure of nearly £3 ½ million on the college was a confident investment in the future which it had to serve and to attempt to reshape. Its success would depend on “wisdom, teamwork and real spirit of teaching and leadership”. Without that vision and leadership, he pointed out, the college would not have come into existence at all. There had been the sterling work of the City of Cork VEC and its sub committee and the Board of Management. The Taoiseach paid a special tribute to the City VEC Chief Executive Patrick Parfrey who retired on the day of the opening; “His period in that post would be remembered for the earnestness, thoroughness and perseverance of his work, for the many innovations which he had inspired in a period of rapid change and for the buildings and plans which would survive as monuments to his endeavours”.

The RTC brought technical education together into one complex. The Taoiseach made reference to the history of the Crawford Municipal Technical Institute of Crawford Tech. A number of extensions were made to the building over the years to accommodate extra classes. As far back as 1963 saturation point had been reached and in that year all junior day classes were transferred to premises in Sawmill Street and Parnell Place. In addition all apprentice classes in building and furniture trades moved to the Sawmill Street complex. Other premises acquired were SS Peter and Paul’s Primary Schools, for electrical trades; the Deanery in Dean Street, for mechanical engineering and civil; and in 1972 some rooms were hired from the community centre at Greenmount for the use of mechanical block release classes.

Mr Lynch continued by saying there would be great pressure to ensure the relevance of what the college provided for the changing needs of society and of the region. This demanded close links with industry, research, business, development agencies and, of course, with other educational institutions. Courses tailored to industrial needs were increasingly being structured by the college. Courses were put on for Chemiotic Brinny, An Foras Forbartha, the Institute of Public Administration and the accounting profession. In the late 1970s, the college undertook courses in food hygiene for the bacon industry and developed a joint course with Marathon Petroleum for the training of its personnel on the Kinsale Head production platform.

In a wider context, the region was in a good position, economically and socially. Cork Corporation’s Development Plan Review for 1977 reveals a city with a varied industry. It had well developed commercial centre generating almost a quarter of all Munster retails sales and a concentration of important education and professional services. The Port of Cork was the major distribution centre for the south of Ireland. In 1971 Cork Port handled an estimated 40 per cent of the total port traffic of the whole State. Developments of the Corporation’s housing holdings at Hollyhill, Bishopstown and Mahon were being pressed ahead. These developments were to provide industrial sites, ancillary social facilities such as schools and shopping and residential areas with a combined population when complete of about 12,000. The City and County Authorities, CIE, the Cork Harbour Commissioners and other development agencies had come together under the aegis of the Regional Development Organisation to undertake a Land Use Transportation Study of the Greater Cork Area.

In an Irish context, on 1 January 1978 Ireland advanced its membership of the EEC a day later after RTC’s opening. The country’s cheaper food prices were to be finally brought into line with those in the original six community countries. The New Year marked the end of a five year transitional period and the beginning of a new era in Ireland’s international relations and markets.