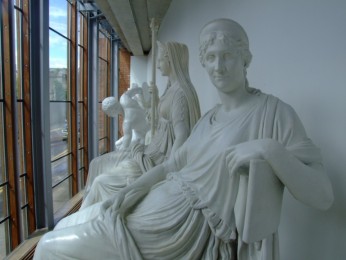 “Technical Memories (Part 91) – Premises for a College of Art”

With a new RTC up and running in Cork from October 1974, attention soon turned to the future of the Crawford Municipal Technical Institute. Education leaders in Cork turned their focus to converting the premises into an art college whilst creating more gallery space and a larger civil art centre at the Crawford Art Gallery.

In the early 1970s, the Cork Vocational Educational Committee (VEC) made a policy decision, which included the conversion of the Crawford Tech into the Cork School of Art. The Irish Press on 21 February 1977 (p.6) outlines that a meeting was held of representatives comprising concerned groups and people in the School of Art. Some criticism of the proposed transfer was made but a show of hands displayed firm support for the move. The VEC CEO Patrick Parfrey referred to a special committee on art accommodation in Cork and stressed that the existing accommodation for the visual arts was grossly inadequate both for students and the public. They had found themselves unable to exhibit or even store their own paintings or to accept works on loan from other galleries; “as the second city in the State to ask for the money for an extension to our gallery, I say unblushingly that the state should have no hesitation in providing it…the galleries we have were built through the generosity of the Crawford Family nearly a century ago and they have served us all during this time”.

Mr Parfrey detailed that the School of Art had 173 full time art students and eleven courses. Most of those who had qualified in previous years were able to get teaching jobs and he foresaw more vacancies for future teachers. Stressing the role of the school in Cork’s cultural life, he added; “we were the first gallery to run art classes for children and have been running them for over 135 years. We were also the first gallery to have lunchtime recitals”. He explained that the planned conversion into an art centre would include more “hanging and storage facilities, library space and a restaurant”. In addition there would be enough space on a site within the gallery grounds to build proper headquarters for the National Ballet Company, which was looking for accommodation; “With the Opera House adjoining us on one side and with the ballet headquarters on the other, we would be in fact and in name a real art centre – though of course, the ballet company would have to provide its own funds for its building”. Other speakers including members of the teaching staff of the school and Miss Joan Denise Moriarty supported the arts centre project. The ballet centre eventually materialised though at the Firkin Crane in Shandon.

The move of the School of Art was critiqued though. Artist Gladys Leach reminded the meeting that the Cork School of Art was built specifically for art students and it was important to remember its past functions; “ it has magnificent rooms with northern lighting and there is an atmosphere of art her which you will not get at a technical school. It would be a crying shame if these rooms are used for other purposes other than their original purposes. There is no comparison here with conditions in the Dublin College of Art – it was only a wing of Leinster House but this is a building specially designed as an art school and gallery”. Mr Parfrey noted the concerns of Ms Leach whilst highlighting that the decision was made by the VEC and the project and the transfer were going to happen. A member of the Cork Historical and Archaeological Society spoke of his concern about the changes which might take place in the physical appearance of the present school; “It is a venerable building and there are few of its kind in Ireland. I hope this will be borne in mind when any conversions are being made. We have too many bad examples around us of conversions”. Following a proposal to form a steering committee to implement the decision on the art centre and to raise funds for the alteration, the following with two members of the VEC were appointed; Art critic Hilary Pyle, architects Jim Barry and Frank Murphy, Tony Thornton, President of the Cork Chamber of Commerce and Mrs Dennis Murphy.

Fast forward to February 1980 and the Irish Press also detailed the actual move (14 February, p.9). About £240,000 had been spent on conversion and furnishings of the new schools in the 1912 building. The Cork School of Art had always elicited respect through the quality of its work and teaching, particularly in the realm of sculpture, and two of its graduates were chosen to represent the new avant garde in a show of contemporary Irish artists being held in the Angela Flowers Gallery in London as part of the Sense of Ireland Exhibition. The two young women were both from Cork, Éilís O’Connell and Vivienne Roche. Éilís showed three works on paper, which she described as “three dimensional drawings” and Vivienne exhibited watercolours. Another graduate Dorothy Cross had gone onto study at the Leinster Polytechnic and in California, where she specialised in sculpture. All three of the latter are still artists of great repute exhibiting at home and abroad.