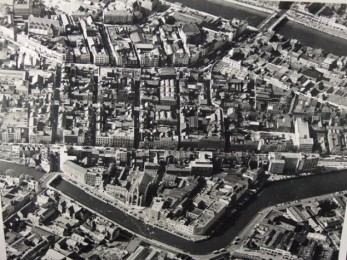 An important occasion for the Cork Regional Technical College was how the principal James P Roche described the conferring of 135 students from eight faculties with national certificates and diplomas. The conferring was performed by Pádraig Mac Diarmada, Director of the National Council for Education Awards in the presence of a distinguished gathering (J A Cullen, journalist, Evening Echo, Tuesday 19 November 1974, p.9).

Cork’s CIT campus celebrates its 40th birthday this month. The new college at Rossa Avenue officially began operations on 1 October 1974 with close on 4,000 students enrolled (most of them male). Those who received certificates and diplomas at the first conferring ceremony in November 1974 had pursued their studies in the Crawford Municipal Technical Institute, its annexes and the School of Commerce. Remarks by the principal Mr James Roche in the Evening Echo on 19 November 1974 highlighted the important difference between the Cork College and other regional colleges – the Cork College was to be a “confluence of activities and traditions already in existence rather than a new department in technical education”.

The Cork College was by far the largest of the regional colleges and at that point in time the college was awaiting the addition of courses in navigation studies and catering studies. The journalist reporting on the conferring noted of potential space problems going forward; “The College must be extended in the near future to provide for the development in range and level of courses, which is inevitable”. In the beginning, the role of the college extended over the region comprising Cork City, Cork County and South Kerry and embraced a population of nearly half a million people. Mr Roche detailed that in the past technical education in Cork City had provided a service mostly to people within the urban area; “the Regional College must serve and must be seen to serve the whole region in a much more extensive way, from the outset, and must not be identified as a city college”.

Mr Roche added that the college was to provide an opportunity for young men and women in the region for obtaining an education and training over a wide range of disciplines and with a flexible and extensive award system; “The flow of students from all parts of the region to the college to take these courses was considerably strengthen the college both in size and in standard; “Also, the flow and qualified and trained graduates from the college back to all parts of the region will immeasurably enhance and strengthen these areas and help in the development and support of economic improvements. This is the real importance of the college and the real responsibility which it must face”.

In the Cork RTC in 1974, there were a substantial range of courses, for example the courses for certificates and diplomas in business studies, certificated and diplomas in applied chemistry, applied biology, civil engineering, mechanical engineering and marine engineering. There were construction studies leading to certificates and to diplomas in construction economics and architecture. There were certificate courses in instrument physics, electrical engineering and medical laboratory technology. There were courses in textile technology, marine electronics and radio/television servicing. Some of these courses were new in Cork whilst others were long established with a graduate output which had made substantial impact over the previous decade in business and industry. According to Mr Roche, “this acceptance by industry of graduates is a further guarantee of the validity and relevance of the courses”. Some of the work was of particular national significance, for example the Marine engineering course. There was also a course for the training of engineers to professional level and it was hoped at the time to provide an avenue through the Diploma in Engineering on to professional level.

Mr Roche also alluded to the perspectives of educational leaders in Tralee, who argued that the technical college there should be designated a Regional Technical College with a region comprising all of Co Kerry, South Limerick and North Cork. To Roche this represented a “major deletion from the catchment area of the Cork RTC”. The proposal was well supported in Tralee and had been canvassed for at national level as well. Roche claimed the need for standards and a large catchment area; “there is a standard for technical colleges, an international standard, and the technical colleges here are bound by that standard. There is a critical size and necessary range of activities for a bona fida college. The Cork RTC can meet these criteria but it must serve and be supported by a major catchment area”.

Mr Roche also commented on the close link between technical education in Cork and University College. A successful example of that had been the Diploma in Chemical Technology, which was highly rated. There had also been the partnership with UCC in a food science diploma. This kind of development, said Mr Roche, was of great significance in the regional context’ “it highlights the need for a real appreciation and understanding of the importance of the RTC in providing education and training at the appropriate levels as a fundamental service to every part of Cork City, Cork County and South County Kerry”.