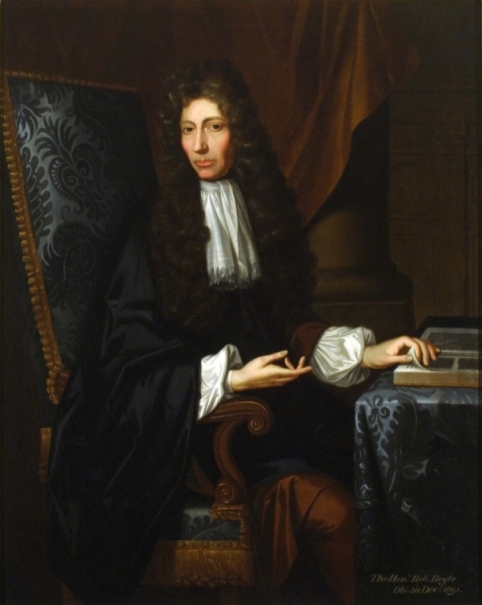 Robert Boyle – A Man of Science

Continuing on from last week to explore the legacy of Richard Boyle’s children, Catherine Boyle (1615-1691) was the seventh child of Richard Boyle and Catherine Fenton. In the 1650s her younger brother Robert Boyle (1627-1691) had a laboratory in her London house, as well as in Oxford, and they conducted science experiments together. Her personal archive of letters suggest that her influence and encouragement on her brother’s work were considerable. Robert’s contemporaries widely acknowledged Catherine’s influence on his work, but later historiographies dropped her from the record. Theirs was a lifelong intellectual partnership, where as brother and sister, supported each other’s scientific ideas. This year marks the 400th anniversary of the birth of Catherine Boyle, later Lady Ranelagh, A special commemorative plaque was unveiled at the entrance to Lismore Castle earlier this year on 27 June as part of the annual Robert Boyle Summer School.

The Encyclopedia Brittania describes Lismore Castle-born Robert Boyle as an Anglo-Irish natural philosopher and theological writer, a prominent figure of 17th-century intellectual culture. He was best known as a natural philosopher, particularly in the field of chemistry, but his scientific endeavours covered many areas including hydrostatics, physics, medicine, earth sciences, natural history, and alchemy. In his memoirs he denotes; “I look upon experimental truths as matters of great concernment to mankind”. His enormous output also comprised Christian devotional and ethical essays and theological tracts on biblical language, the limits of reason, and the role of the natural philosopher as a Christian. He subsidised many religious missions as well as the translation of the Scriptures into several languages. In 1660 he helped found the Royal Society of London.

In a biography of Boyle by Michael Hunter (2009) entitled Boyle, Between God and Science, he details that Robert was educated at Eton and arising out of his work in literature and science, in 1654 he was invited to Oxford. He took up residence at the university from c.1656 until 1668. In Oxford he was exposed to the latest developments in natural philosophy and became connected with a group of notable natural philosophers and physicians, including John Wilkins, Christoper Wren, and John Locke. These individuals, together with a few others, formed the Experimental Philosophy Club, which at times convened in Boyle’s lodgings. Much of Boyle’s best-known work dates from this period. In 1659 he and Robert Hooke, the inventor and subsequent curator of experiments for the Royal Society, pursued the creation of their famous air pump and used it to study pneumatics. Their discoveries regarding air pressure and the vacuum appeared in Boyle’s first scientific publication, New Experiments Physico-Mechanicall, Touching the Spring of the Air and Its Effects (1660).

Boyle and Hooke discovered several physical characteristics of air, including its contribution in combustion, respiration, and the transmission of sound. One of their discoveries, published in 1662, later became known as Boyle’s Law. The law describes the inversely proportional relationship between the absolute pressure and volume of a gas, if the temperature is kept constant within a closed.

In 1668 Boyle left Oxford and took up residence with his sister Catherine in her house on Pall Mall in London. There he set up an active laboratory, employed assistants, received visitors, and published at least one book nearly every year. Living in London also provided him the opportunity to participate actively in the Royal Society.

The very first Royal Society of London meeting occurred on 28 November 1660 following a lecture at Gresham College by Christopher Wren. Joined by other leading polymaths or knowledgeable people including Robert Boyle and John Wilkins, the group soon received royal approval, and from 1663 it would be known as ‘The Royal Society of London for Improving Natural Knowledge’. The Royal Society’s motto ‘Nullius in verba’ is taken to mean ‘take nobody’s word for it’. It is an expression of the determination of Fellows “to withstand the domination of authority and to verify all statements by an appeal to facts determined by experiment”. The first issue of Philosophical Transactions was published in 1665 and set up the important concepts of scientific priority and peer review. It is now the oldest continuously-published science journal in the world.

Robert Boyle was a man who achieved both national and international renown during his lifetime. He was offered the presidency of the Royal Society (in 1680) and the episcopacy but declined both. Throughout his adult life, Boyle was sickly, suffering from weak eyes and hands, recurring illnesses, and one or more strokes. He died at age 64 after a short illness made worse by his grief over Catherine’s death a week earlier. He left his papers to the Royal Society and a bequest for establishing a series of lectures in defence of Christianity. These lectures, now known as the Boyle Lectures, continue to this day.

The annual Robert Boyle Summer School in Lismore is also a celebration of the life, works and legacy of Robert Boyle, the “Father of Modern Chemistry” and native of Lismore. Starting with an introduction to Boyle, his work and times and continuing over four days with talks, walks and discussion, the school is a place where scientists and non-scientists can meet and discuss ideas relating to our modern world.

822a. and 822b. Portraits of Boyle by the same artist, Johann Kerseboom; the image of Boyle is the same but the setting and frame are presented differently (source: Chemical heritage Foundation) 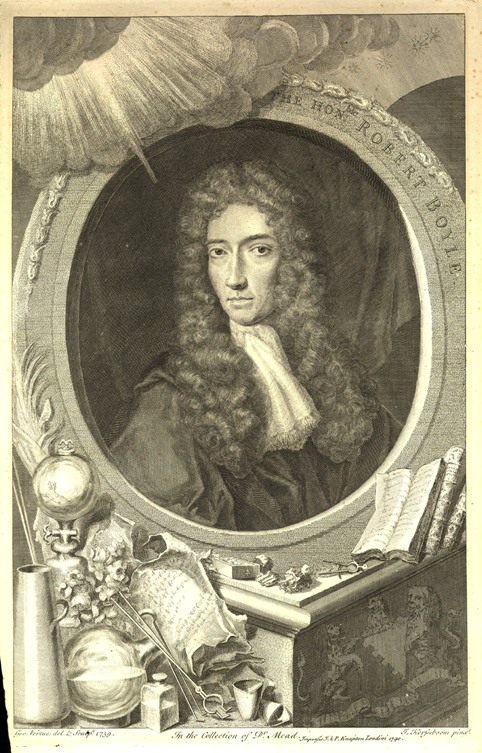