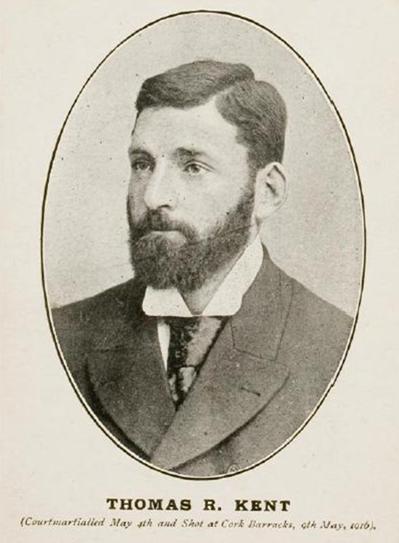 The north Cork village of Castlelyons will come to a standstill on this Friday as it finally welcomes home the remains of Thomas Kent, who along with Roger Casement was the only person outside of the capital to be executed in the aftermath of the 1916 Rising. Following his execution by firing squad at Cork Prison on 9 May 1916 Thomas Kent’s remains were interred in an unmarked grave within the prison compound.

For almost a century the exact location of his resting place remained a mystery.  His family had long campaigned for Thomas’ grave to be identified so that he could be re-interred at the family plot in Castlelyons. This became possible after documents, kept secret by the British for almost a century, were released identifying his grave.  Remains exhumed following an exhaustive investigation led by the National Monuments Service subsequently underwent DNA testing by the State Pathologists Office, the Garda Technical Bureau and the UCD Science Faculty and were confirmed to be those of Thomas Kent.  The Kent family subsequently accepted an offer by An Taoiseach Enda Kenny of a State funeral for Thomas, which will take place in his native Castlelyons on Friday.  On this Thursday evening his remains will arrive to the chapel in Cork’s Collins Barracks. Following a private family sitting, there will be a prayer service, which will be open to the public, from 6.30pm.  The chapel will remain open after the service to allow people to pay their respects.  On Friday the funeral cortège will depart from Cork Prison with full military accompaniment following a private removal service.

The online exhibition of of the National Library’s 1916 Rising, Personalities and Perspectives outlines that Thomas Kent was born in Bawnard House, Castlelyons, Co. Cork in 1865. His family had a long tradition of fighting against the injustices suffered by small farmers and fought particularly during the Land War. When Thomas was 19 he emigrated to Boston where he settled for some years working as a church furniture maker until he was forced to return to Cork due to ill health.

Upon his return he spent some months in prison for his involvement in land reform agitation. It was not unusual for a Kent brother to be in jail and the Royal Irish Constabulary spent much time pursuing and keeping under observation the Kent household. After the split in the Nationalist movement due to the Parnell affair the family seem to have slowed their involvement until Thomas joined the Gaelic League and soon afterwards the Irish Volunteers when they were established in 1913.

John Redmond, the recruiting sergeant for the British Army and leader of the Home Rule Party was due to give an oration in the village of Dungourney. The Kent brothers invited Terence MacSwiney to speak on an anti-recruitment platform at the same time. The local GAA members and Volunteers marched through Redmond’s meeting holding their hurleys on their shoulders in simulation of rifles. That evening a company of Irish Volunteers was created in Dungourney much to the consternation of Redmond and the local police. It was only a few weeks after this that the police arrested and remanded Thomas. Despite their best efforts he was found not guilty but the police raided Bawnard House a few days after his release and discovered weapons and ammunition. Thomas Kent was sent to prison again, this time for two months.

Later, when news of the Rising in Dublin reached the Kent brothers they lingered in some neighbouring houses for orders to mobilize. These orders never came due to MacNeill’s countermanding order and to the fact that J J O’Connell came to Cork with the order to stand down. By 2 May, four of the brothers, Thomas, William, Richard and David returned to Bawnard House. At dawn, the police came to the house with orders to arrest the whole family. They had encircled the house and called for the four brothers to come outside. Thomas replied that they were soldiers of the Irish Republic and that there would be no capitulatation. To this the police replied with a volley of shots. For the next three hours a battle followed but the Kent’s, with only three shotguns and one rifle to their name, ultimately ran out of ammunition. Mrs. Kent was in the house throughout the battle and not only gave great encouragement to her sons but helped to clean and cool their weapons.

The outcome of the fight was that one of the brothers David was wounded and a Head-Constable was killed. In the confusion of the Kent’s surrender, the athletic Richard made a dash for the woods rather than return to prison. He was killed in a fusillade of RIC rifle fire. The constables put the two remaining brothers who could stand up, against a wall, and were going to shoot them but for the intervention of a military officer. On 4 May, William and Thomas were court-martialed. William was acquitted but Thomas was convicted and sentenced to death for taking “part in an armed rebellion…for the purpose of assisting the enemy”. Thomas Kent was executed by the British in Cork Detention Barracks on 9 May 1916. 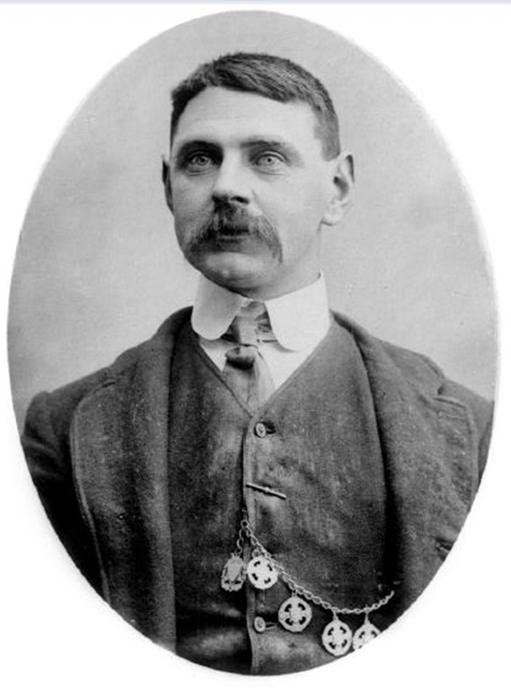