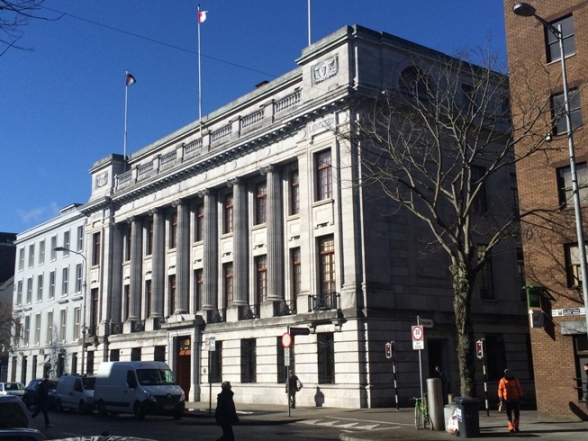 Another Cork heritage open day is looming. The 2015 event will take place on Saturday 22 August. For one day only, nearly 40 buildings opened their doors free of charge for this special event.  Members of the public are allowed a glimpse of some of Cork’s most fascinating buildings ranging from the medieval to the military, the civic to the commercial and the educational to the ecclesiastical. This event was greeted with great enthusiasm by building owners and members of the public alike in 2014 with an estimated 25,000 people participating in the day.

It is always a great opportunity to explore behind some of Cork’s grandest buildings. With the past of a port city, Cork architecture is varied and much is hidden amongst the city’s narrow streets and laneways. Much of its architecture is also inspired by international styles – the British style of artwork pervading in most cases– but it’s always pays to look up in Cork and marvel at the Amsterdamesque-style of our eighteenth century structures on streets such as Oliver Plunkett Street or at the gorgeous tall spires of the city’s nineteenth-century churches.

Cork Heritage Open Day is eleven years in the making and with 40 buildings it is almost impossible to visit them all in one day. It takes a few goes to get to them all and spend time appreciating their physical presence in our city but also the often hidden context of why such buildings and their communities came together and their contribution to the modern day picture of the city. The team behind the Open Day do group the buildings into general themes, Steps and Steeples, Customs and Commerce, Medieval to Modern, Saints and Scholars and Life and Learning – one can walk the five trails to discover a number of buildings within these general themes. These themes remind the participant to remember how our city spreads from the marsh to the undulating hills surrounding it, how layered the city’s past is, how the city has been blessed to have many scholars contributing to its development and ambition in a variety of ways and how the way of life in Cork is intertwined with a strong sense of place.

The trail Steps and Steeples is a very apt way to describe the topography of our city. The Steps and Steeples walk encompasses not only some of the amazing buildings on the North Side of the city, but also some of the most spectacular views. Admire the frontage of the Cork Baptist Church on McCurtain Street, re-examine the crooked but limestone inspiring spire of Cork Trinity Presbyterian Church, gorge on the stained glass windows of St Luke’s Church, re-imagine past hospital treatment at the Ambassador Hotel, revel in how many barrels of beer have been exported from the former Murphy’s Brewery, now Heineken Ireland, reminisce of Cork’s North Infirmary at the Maldron Hotel, attempt to count how many barrels of butter were weighed at the Firkin Crane, ring the bells of St Anne’s Church, Shandon Military and read up about the military history underlining the city’s and harbour’s development.

Open for Heritage Open Day, the military museum at the Barracks has three themes – the history of the Barracks, Michael Collins and Peacekeeping. The core collection consists of memorabilia associated with Michael Collins and also has displays from donated private collections. The Heritage Day brochure remarks that the Barracks building is a fine example of Georgian Architecture. It is also significant from a historic perspective. The fine limestone gateway has been the focal point of historic events in Ireland since the time of the Crimean War in 1856 with the return of the 17 Lancers after the Battle of Balaclava. It was the location for the handing over of the Barracks from the British Government to Commandant Sean Murray of the Irish Army in 1922, and was visited by President Kennedy in 1963.

Meanwhile down by the river, the Customs and Commerce walk follows the Lee and showcases some of the old and new commercial buildings in the city. These buildings track the commercial history of Cork City and highlight its many industries over time. For the more energetic walker this route can be combined with the Medieval to Modern walking route. Re-imagine the turning of the wheels of the trams at the National Sculpture Factory, learn about local government in the City Hall, think highly of the multiple stories of the city’s masons and carpenters at the Carpenter’s Hall, feel the energy of the steam ships in the maritime paintings in the city’s Custom House, and look at the fine details on the pillars within AIB Bank on the South Mall. The flagship AIB Bank, former Munster and Leinster bank building at 66 South Mall, designed by Henry Hill, celebrates its centenary this year. It is an iconic nine bay 3 storey building, built between 1909 to 1914, in the heart of the financial district of Cork.  It is Edwardian – Italinate in style. The distinctive building façade is in stunning local silver limestone, and the main façade upper floors are articulated by giant order fluted lonic columns – very striking and beautiful indeed.

See www.corkheritageopenday.ie for more information on the city’s great heritage day and then followed by Heritage Week.

805b. Interior of 66 AIB, South Mall at this year’s launch of the Cork International Choral Festival (picture: Kieran McCarthy)