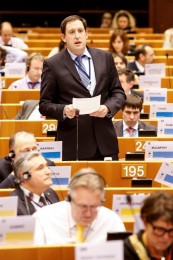 Cllr Kieran McCarthy has been appointed by the Minister of the Environment to the EU’s Committee of the Regions in Brussels, which represents local authorities across Europe and gives opinions to the European Parliament on local and regional issues. The committee meets several times a year over two days. Responding from the floor of the European Parlimaent to a keynote address by the parliamentary secretary for Latvia, a country which currently holds the EU Presidency, Cllr McCarthy’s maiden speech highlighted the economic crisis and the importance of the EU structural funds to small cities:

Europe is in a crossroads which is worrying people in cities such as my own in Cork but also across the length and breadth of the EU. The unstable situation in Ukraine, the terrible terrorist killings in Paris – have people wondering where Europe as the great peace project we have known it to be. On the other hand the economic crisis still hits people very hard, with many families with not a penny or indeed a cent to spare at the end of a week. People are looking for leadership, they are looking for vision and they are looking for clear action and this is what we hope that you can guide Europe towards in your presidency.

I will just go into a few specifics of your programme – you say you will will endeavour to ensure timely implementation of European Fund for Strategic Investments (EFSI). As you are emphasising the role of small and middle size cities, the EA group hopes to have in the Latvian presidency an ally in ensuring accessibility to small scale projects. While we acknowledge that higher return of investments could be higher in metropolitan areas, we don’t want to see middle size, small cities and rural areas left behind; we want the EISF to contribute creating real jobs at local level.

On energy security, we look forward to the new Energy Union policy to be unveiled shortly and we hope the EU and its member states really progress towards the completion of the energy markets which are still too fragmented.

We want the EU to exploit all the existing energy mix in the member states (from clean coal to renewable energies) and avoid EU dependence on few sources and providers.

The EU should seize the opportunity of the oil prices bonanza to invest savings into cleaner energy sources and new promising technologies which could ensure self-sufficient and decentralised energy production systems in the next decades, notably by exploiting the untapped potential of renewable energy sources such as solar, wind, tidal, etc.

As the Covenant of Mayors witnesses, the commitment of local and regional authorities in voluntarily reducing emissions and adopting sustainable energy planes far exceeds the ambition of member states and the EU as a whole. And we expect the Latvian Presidency to reinforce the Covenant and that more resources are granted to cities and municipalities .

Finally, I come to my third and final point which I mentioned in my opening remarks: the EU should not forget it was born to bring peace in the continent. While there are for sure a number of other important challenges, we must not take this for granted. Tensions are flaring at the EU’s borders. Stability and prosperity at the EU’s border is reflected in the EU. We are happy to see your Presidency put the Neighbourhood policy and in particular Eastern partnership at the core of the agenda and we hope the recommendation of the assembly of local and regional authorities in the Eastern partnership will be taken on board at the next Riga summit.