Mallow town developed rapidly in the late sixteenth century and seventeenth century as an English plantation town. Mallow castle was burned down by supporters of James II in 1689, marking the end of its use. Instead of restoring the house, the Jephsons converted other buildings into a new residence. Shortly afterwards a new bridge nearby was built over the River Blackwater. The section of four small arches on the town side of Mallow Bridge is all what remains of the first stone bridge over the river. Built in 1712, it had a total of fifteen arches. During the severe flood of 1853 several of the arches were swept away and others were severely damaged. This section was replaced by a new bridge of four arches in 1856. On the bridge stands a monument to the volunteers of the old Irish Republican Army of the Mallow area who gave their lives in the War of Independence.

Throughout the centuries the town has prospered as a market town, helped by the River Blackwater, its rich agricultural hinterland, its central location and its importance on the railway network. In the eighteenth and nineteenth centuries, through the Jephsons, Mallow became famous as a spa resort and became known as ‘The Irish Bath’. Pigot’s Directory of 1824 describes Mallow as follows: “The modern structures consist of a handsome church, and a new market house, with convenient buildings adjoining, erected by the present proprietor; here also are chapels for Roman Catholics, Wesleyans, Calvinists and Independents. Contiguous to the town is a spring of moderately tepid water, bursting from a limestone rock; its medicinal qualities attract a numerous assemblage of fashionable society, for whose convenience commodious baths are about to be erected; it was discovered in the year 1724, and in quality assimilates to the hot water of Bristol – its temperature is 68 ½ . Mallow since the year 1803 has returned one member to the Imperial parliament, elected by a seneschal and freeholders”.

The Jephson legacy permeated into the nineteenth century. This is evident in the history of the some of the key historic buildings in the town. A descendant of Sir John Jephson, husband of Elizabeth Norrey was Charles Denham Jephson-Norreys who donated a site south of Main Street, Mallow for the construction of St Mary’s Roman Catholic Church. There in 1818 the Church of St Mary was built. This was a triumph in an intolerant time when the struggle for emancipation was still eleven years from victory. The new church was originally built behind a row of houses that stood along Main St. Access was by a narrow lane to the west and south of the present Credit Union building, formerly the National Bank. It was unacceptable in the days before Catholic Emancipation in 1829 to have a Catholic Chapel in a prominent position. These houses were gradually removed, thus providing a piazza fronting on to Bank Place.

The new St Mary’s Church was cruciform in plan including a basic nave with side aisles and shallow transepts with galleries. Initially it had an earthen floor and no seats. During the first two decades of the twentieth century Canon Wigmore (P.P. 1881-1917) had the church enlarged and some of it rebuilt. He employed the services of Messrs Ashlin and Coleman architects to carry out this work. The interior was also embellished with a beautiful rib vaulted plaster ceiling and fluted columns this was the work of the Orangie family from Italy. In the 1990s the roof was found to be unsafe and it was completely re-roofed. Unfortunately, the ceiling executed by the Orangie family earlier in the century was unable to be saved. The ribbed vaulted portion over the nave was replaced by a plain tunnel vault.

The spa house was built in 1828, by Charles Denham Orlando Jephson (1799-1888), MP. It is in the old English style of rural architecture, and in its day contained a small pump-room, an apartment for medical consultation, a reading-room, and baths. The building was fitted up for supplying at short notice, hot and cold salt-water, vapour, and medicated baths. The approach to the spa from the town was and still is partly through an avenue of lofty trees along the bank of an artificial canal, affording great scenery.

Situated in the heart of Mallow town centre and overlooking Main Street to the north, is one of the town’s most recognisable landmarks – the clock tower. The half timbered Tudor style facade fills the building with character. It was built around 1855 using the designs of Charles D O Jephson who also dabbled as a local amateur architect. The building was once a licensed premises. The bell tower became structurally unsound and was removed around 1970 for safety reasons. The building has been used as offices for many years and the owners have recently invested a considerable sum in works to bring the internal of the building to a high standard. Adjacent today stands the Thomas Davis Statue in remembrance of an eminent Irish statesman, writer, and one of the instigators of the Young Ireland Nationalist movement. 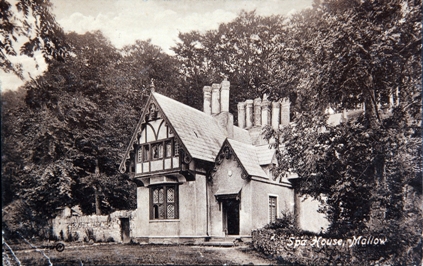 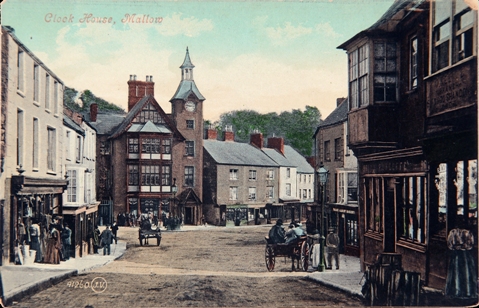