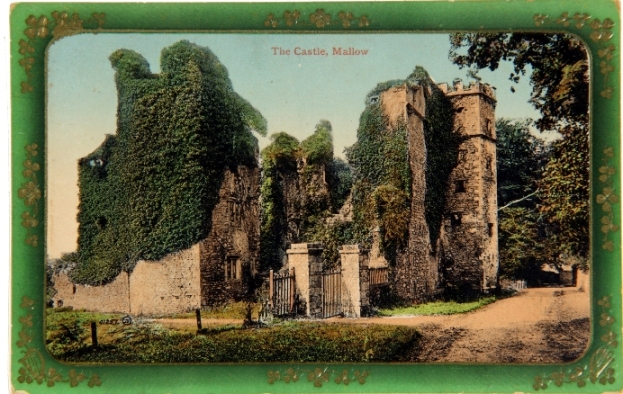 Stories at the Plain of the Rock

Upstream on the Blackwater from Fermoy and shown on John Speed’s Map of Munster c.1610 (from The Theatre of the Empire of Great Britaine, 1611-12) is the historic town of Mallow. The name is derived from the Irish Magh Ealla (The Plain of the Rock). The original Mallow castle was built by the Anglo-Normans in 1185 AD, after the native O’Keeffe’s had been dispossessed. In 1282, the Desmond Fitzgerald’s built a new castle. Soon afterwards, a Baron of the Geraldines, Thomas Fitzmaurice, traded his land in Kerrylocknaun, Connaught, with the Desmond Fitzgeralds.

After Thomas Fitzmaurice died in 1298, the land stayed in Geraldine hands until their rebellion in the closing stages of the sixteenth century, when the Earl of Desmond’s brother, Sir John of Desmond took possession of it. However, he and his wife, Ellen, had no children, so the castle was not inherited and left to decay. It then passed through a stream of owners, including Sir William Pelham and Sir John Norreys of Rycote in Oxfordshire. His brother, Sir Thomas Norreys, inherited the 6,000 acre estate in the late sixteenth century.

The nearby town for centuries also formed part of the territories of the great Fitzgerald family, the Earls of Desmond. This place was one of the centres of the operations of the English forces in North Cork. After the rebellion of the Desmonds in the reign of Elizabeth, the Queen fortified the castle for the defence of the ferry across the river. In 1584, the castle and the manor were granted by the Queen to Sir Thomas Norreys/ Norris, Lord-President of Munster. Today walking around the grounds of the ruinous but impressive structure, information panels by Dúchas, the Heritage Service, detail that the fortified house was built between 1584 and 1599 by the Norreys. The building stone was taken from an older castle on the same site, which had belonged to the Fitzgeralds. The castle is a long building with projecting bays in the centres of the two long walls, with octagonal turrets at the corners of the front of the house. There were four storeys in the main block, including an attic and cellar space. Floors and room partitions comprised of wood, except for one stone wall across the middle of the building. There are small holes below the windows through which the muskets could be fired.

Thomas Norreys (1556–1599) appears on several occasions in the Annals of the Four Masters and described in the Dictionary of National Biography of Great Britain. He was the fifth son of Henry, baron Norreys of Rycote and Wytham Abbey in Oxfordshire (the latter previously in Berkshire), and his wife, Margery, the youngest daughter of John Williams, 1st Baron Williams of Thame. He matriculated from Magdalen College, Oxford, in 1571, aged 15, and graduated with a BA in 1576. Sir John Norris (1547?-1597) and Sir Edward Norris were his brothers. In December 1579 he became, through the death of his eldest brother William and the influence of Sir William Pelham, captain of a troop of horse in Ireland. Thomas took an active part in the following year in the campaign against Gerald Fitzgerald, fifteenth earl of Desmond. During the absence of Sir Nicholas Malby, president of Connaught, in the winter of 1580-1, Thomas acted as governor of that province, and fought the Burkes and other Gaelic Irish families. In 1581-2 he was occupied, apparently between Clonmel and Kilmallock, in watching the movements of the Earl of Desmond. On the retirement of Captain John Zouche in August 1582, on account of ill-health Thomas he became colonel of the forces in Munster. He compelled the Earl of Desmond to abandon the siege of Dingle, but, nothing came of it.

In 1588 Thomas accompanied Sir Richard Bingham in an expedition against Connaught. In 1595 he and his brother John were wounded in a skirmish near Athlone. In September 1597, he was appointed President of Munster in Sir John’s place, having been already Vice-President thereof for some years. His brother John was appointed President of Munster in June 1584. In 1589 he was joint commander with Francis Drake in an expedition against Spain. In February 1595 he landed a force of some 2,000 troops to oppose O’Neill and the chieftains of the north. John was mortally wounded in a conflict with the Burkes near Kilmallock in the summer of 1599.

Around 1610, the date of John Speed’s map, Sir Thomas’s daughter Elizabeth, married an English knight, Sir John Jephson, and they came to live at Mallow Castle. Queen Elizabeth I was her Godmother. In 1612, James I confirmed to Elizabeth Jephson, the castle, manor, lordship and cantred of Mallow, a total of 6,000 acres in surrounding townlands, a fishing weir and two mills on the River Owenmore and Blackwater and a ferry over the latter. John Jephson was the son of William Jephson of Froyle, Hampshire and in 1603, he was knighted by Sir George Cary. He served in the army and became a major-general. In 1621, Jephson was elected Member of Parliament for Hampshire and in 1624, he was elected Member of Parliament for Petersfield and was re-elected MP for Petersfield in 1625. 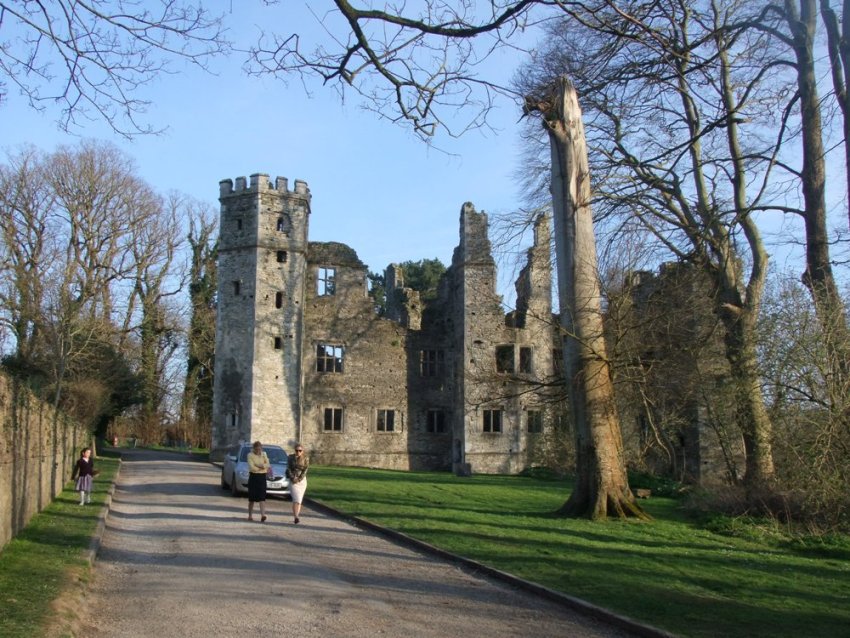