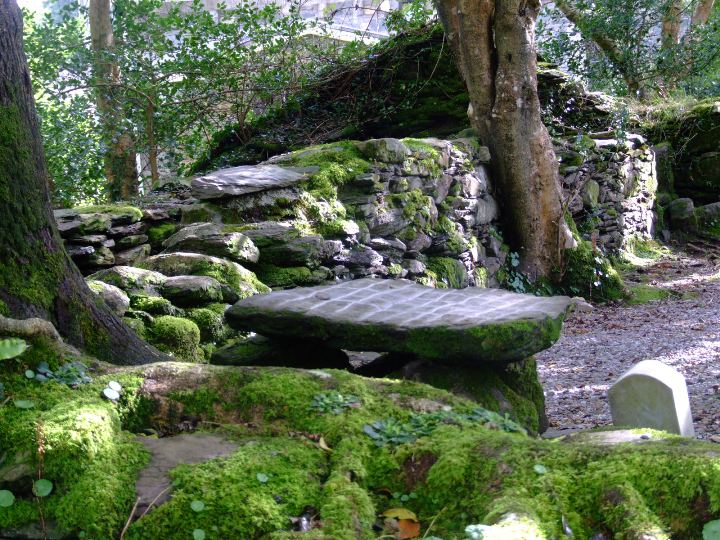 The Altar Stone of Gougane Barra

I have spent many years admiring the old altar at Gougane Barra. I sat by it for many hours doing survey work four years ago. I interviewed the bones of 100 people who were honest and candid in what they experienced at the site, drawing on their memories and experiences. I often admired the person who picked up a pebble, paused, then carved a cross into the hard limestone slab, and then paused again in silent reflection, almost nodding to the power of the stone. The marks always looked fresh – always looked like a kind of ongoing process – always on top of the last marking – it was an unfinished beautiful artwork –there was no instruction booklet to it but the gut of almost each visitor to the pilgrimage island informed them to mark it with a cross.

The stone’s recent stealing has disillusioned me. Who could take such a historic object? Who would intentionally in the dead of night (probably) conduct an operation to remove it from Gougane Barra. It’s not just because of its date that grieves me, the potential of being three hundred years – indeed it’s date of origin can be disputed – the actual story of the stone is muted for the most part by the haze of history – it reputedly belonged to an old stone walled church and eight celled pilgrimage complex and lodgings created by a Fr Denis O’Mahony in the early days of the penal laws in the early 1700s and all dedicated to continue the myth and legacy of Cork’s saint Finbarre. Fr O’Mahony countered the penal laws in Ireland through building a pilgrimage site, thus defying the laws himself. The various acts of remembering were widened and reconstructed over several decades by Cork clerics and antiquarians. The erection of an inscribed stone c.1824, at the base of the front of the pilgrimage cell structure sets and lists the ritual via a rounds system of prayers to be completed around the pilgrimage island – a pathway around the small island, linking ideas and thoughts together about the different values offered by the place. Prayers at the old altar was parts of the rounds set.

In particular I grieve for all those human marks on the stone – the chess board like cross carvings, centimetres deep into the stone. I grieve for all those people who took the time to mark their presence on the island – to carve their voices and as such a piece of their soul, memories and experiences as such into the stone. Whether you’re Christian minded or not, the marking of the stone for me at any rate marked and remembered many concepts – standing out is the celebration of human life, that we all travel the road of life together with all its ups and downs, opportunities and crosses we bear.

The process of history has a terrible habit of distilling down the voices of the many, in favour of one voice. Cork history is riddled with questions with unknown answers, about the region’s historic development, the story of its people, and the role of Cork identity in regional and national stories. This week’s column is number 800, a long process of weekly writing since autumn 1999 and one which I continue to enjoy the journey and process of. One aspect arising from my research continues to emerge. There are the voices of thousands and thousands of people who lived their life in Cork and whose stories have never been recounted – then there are the stories collected by countless local historians that will never see the light of day. This stone represents a beacon or a lighthouse for the silent voices of the many who came to Gougane Barra in search of many things about themselves – to learn something about themselves and others.

I can be honest and say that through a recent thesis using Gougane Barra as a case study, for two years, I fell out of love with the place. Like a jilted lover, I learned about what made Gougane Barra and its beauty tick, the raison d’etre behind each monument in the area. I opened its rattle and saw how much of Gougane Barra’s surface scenery in terms of its monuments and trees are all human-made, how all have a political purpose and meaning of sorts. But putting the rattle back together, I began to appreciate how all the parts work with other – how clever and thoughtful the makers were, the early eighteenth century pilgrimage cells, the early twentieth century oratory, the national park, the hotel, the old rounds system- that all have a role to play in invigorating the experience of people and vice versa, the experience of people invigorate these latter sites with a voice and continued and renewed vigour and interest.

The stone helped in the experience of place in Gougane Barra – aided in the production of a sense of place, the appropriation, re-appropriation, sensing of the place, the acknowledgment and imagination of the place, the yearning for, contestation and identification of the place and much more. There is so much to the old and beautiful altar stone. If anyone knows where it is, please report it to Macroom Garda Station, 026 20590. It is a matter of all the above thoughts and much more – it is a valued part of our cultural heritage.

800a. Altar stone, Gougane Barra, insitu before it was stolen (picture: Kieran McCarthy) 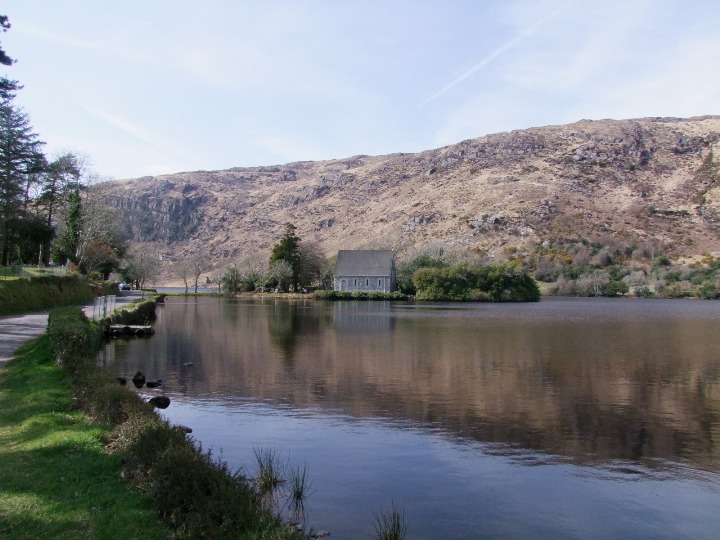