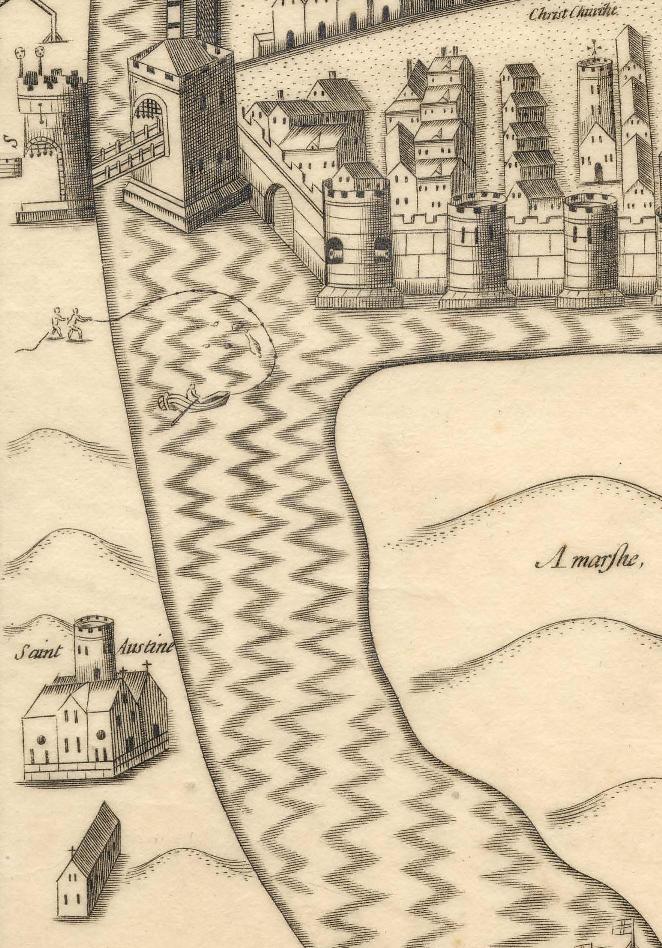 George Carew’s Map of Cork, c.1600 also places an emphasis on the Augustinian Abbey. The central bell tower of the church of Red Abbey is a relic of the Anglo-Norman colonisation and is one of the last remaining visible structures, which dates to the era of the walled town of Cork. Invited to Cork by the Anglo-Normans, the Augustinians established an abbey in Cork, sometime between 1270 A.D. and 1288 A.D. The uncertainty of the date is due to an absence of records for this medieval order in Cork and the information we do possess primarily appears in the work of Sir James Ware, an Elizabethan antiquarian who highlights the history of Red Abbey in his writings in 1658; ‘De Hibernia et Antiquitatibus Eius’. In addition, nineteenth century Cork antiquarians such as John Windele in 1844 and Charles Gibson in 1861 relate in their publications on Cork, stories of archaeological discoveries and folklore about the area.

It is known that in the early years of its establishment, the Augustinian friary became known as Red Abbey due to the material, sandstone, which was used in the building of the friary. It was dedicated to the Most Holy Trinity but had several names, which appear on several maps and depictions of the walled town of Cork and its environs. For example, in a map of Cork in 1545, it was known as St. Austins while in 1610, Red abbey was marked as St. Augustine’s. In medieval times, an abbey comprised a church, which was divided in two by a central tower. The tower divided the altar area from the public area and connected to the church area were religious and domestic rooms. In the case of religious rooms, these included a sacristy, a reading room or chapter room. In the case of the domestic rooms, these took the form of a kitchen, refectory, cellars and a dormitory. Apart from been connected to the church these rooms would also encompass the abbey’s central garden and walking area known as the cloister garth.

Sir James Ware, the Elizabethan antiquarian, in 1658 noted that an interesting event in the Augustinian diary for Cork occurred in the year 1313. It is known that the population size of the community was growing and a problem arose when a decision was made among the group to extend the buildings of the abbey. The extension entailed closing part of the Kings highway, which is the vicinity of the adjacent Douglas Street today. Proceeding before the local authorities, the friars explained that they would replace the portion of the highway, they sought with another route. Their plea was heard and approved locally by the King’s Justiciar of Ireland, one Edmund le Botiller.

The Augustine Abbey occupied an area now bounded by Dunbar Street, Margaret Street, Mary Street and Douglas Street. The nearby neighbourhood of Friars Walk in Turners Cross echoes that the area was once used as a walking area and eighteenth century maps of Cork show the former gardens belonged to the Augustinian monks. Their lives were bound by strict religious discipline and devotion to God. With an absence of definite sources, it can be speculated that a hierarchy existed within the Augustinian order at Red Abbey and the order was quite large in size with at least fifty monks living in the abbey. During King Henry’s suppression of monasteries in the 1540s, surveyors of the King came in February 1541 to the silent prayful Red Abbey, accompanied by local Jurors: Water Galwey, John Skiddy, Richard Gould and Patrick Coppinger. These family names played a major part in the economic, civic and social history of medieval Cork. These were the names of some of Cork’s great Mayoral families. They described that the Augustinians had a church, gardens including self-sufficient vegetable gardens, cemetery, an old and new dormitory, cloister and other usual structures of a religious house. They also noted for the King, that salmon fishing was carried on nearby and that the friars possessed a half share in a local water-mill.

In 1541, Henry VIII ordered the closure of Red Abbey and the Augustinians were forced to leave their abbey for a short time. It is known that they did remain in the local area and aimed to stay established. As soon as monarch pressure eased, conventual life was resumed at Red Abbey. Sometime in the years 1687 to 1690, Ignatious Gould, Merchant and property owner bought a portion of Red Abbey from the friars while the rest of the portion was given to Othowell Hayes of Ballinlough in the southern suburbs of Cork. Hayes owned a thatched cabin and garden with half an acre of land in Coulin on the south side of the abbey itself.

The friars left at this point and in 1690, Red Abbey was used as a base by the English to fire cannon balls into the City during the siege of Cork. It is unknown if the English troops damaged Red abbey during the siege but it is known that the Augustinian order in Cork was affected by the penal laws which outlawed open public worship among Catholics and condemned Catholic religious orders.

795a. Plan of Augustinian Abbey with South Gate Bridge from Map of Cork, late sixteenth century as depicted in Sir George Carew’s Pacata Hibernia, or History of The Wars in Ireland (1633), vol. 2, opp page 137. 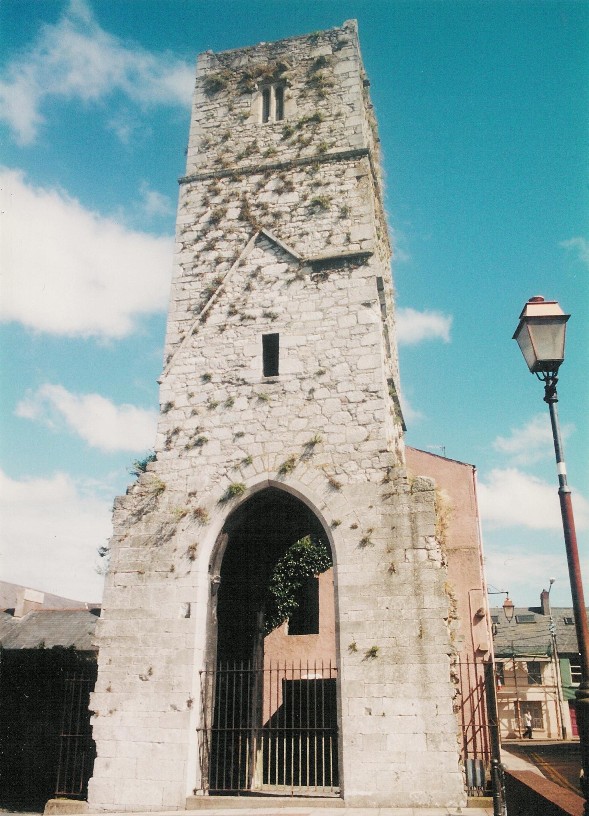