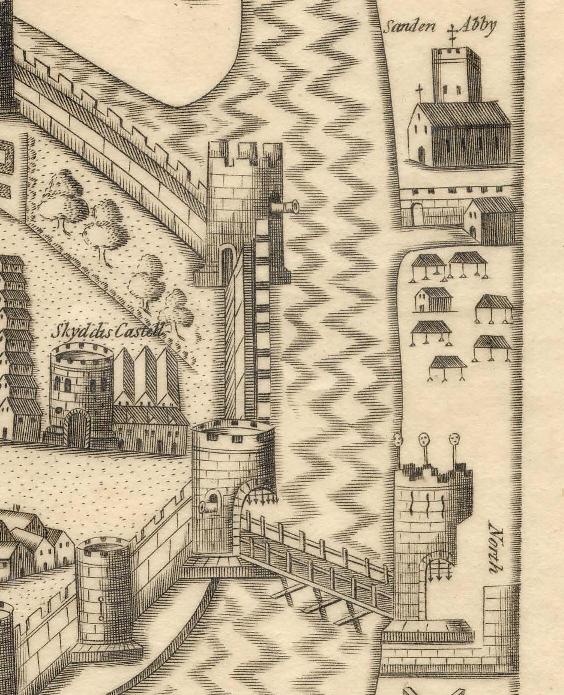 Franciscans at the North Abbey

Depictions of the walled town of Cork in George Carew’s Pacata Hibernia, c.1600 emphasises a Franciscan Abbey on what is now the North Mall. By 1600, it is to have at least a church with a belfry but with an unknown number of bells. The belfry separated the altar area from the congregation area. The friary was set against a rock face dedicated to Our Lady and early records show that the church was markedly divided in two by high columns and had an excellent choir or altar area in the church. Depictions of the abbey do not show a wall around the whole complex.

In the twelfth and thirteenth centuries, a number of religious houses were established in the suburbs of the walled town of Cork and further out into the region. On the northern hillside, large tracts of land were owned by the Franciscans who also established an associated abbey on what is now the North Mall. The abbey was founded in 1229 by the Irish chieftain, Dermot McCarthy, King of Desmond who was loyal to the English monarch at the time, Henry II. It was one of the first Franciscan structures to set up in Ireland. An abbey at Youghal had been set up in 1224 whilst one in Timoleague was established in 1240. It became commonly known as the North Abbey or Shandon Abbey and flourished for nearly three centuries in particular in terms of the constant population size of its occupants and the financial support of the surrounding lay community in Munster. From early available Franciscan records, it is clear that provincial chapters or National gatherings of the Franciscan monks also took place at the abbey. The years included 1244, 1288, 1291, 1521 and 1533. Indeed, the first Franciscan provincial chapter in Ireland was held at the North Abbey in 1244. Other accounts come from Sir James Ware, an Elizabethan antiquarian who highlights the history of the North Abbey in his writings in 1658; De Hibernia et Antiquitatibus Eius.

In April 1540, a royal survey under the instruction of the English monarch, Henry VIII detailed that the site of the abbey comprised one hall, one kitchen, one cloister, six large dormitory chambers which could hold a number of monks (number unknown), six cellars, a water mill, a fishing place for salmon, a salmon weir, and several plots of land in the townland of “Teampal na mBrathar” or “Church of the Monks”. Also belonging to the abbey, a dole house or a dwellling existed, which tended to the impoverished people of the Cork area. This stood just to the east of the main complex and in a present day context was located in the vicinity of North Abbey Square on the North Mall. Placename evidence also suggests that the friars possessed a chapel in the northern hills overlooking the walled town known as “Cilleen na Gurranaigh” or “The Little Church of the Groves”. In time, this placename changed to “Gurradh na mBrathair” or “Friars’ Grove”, which is highlighted in the present day northern suburb of Cork City known as Gurranabrahar.

In 1540, the lands of the abbey were confiscated under King Henry VIII. The royal survey which apart from detailing the buildings and possessions of the contemporary abbey also highlighted that the church and belfry were to be demolished and that the rest of the buildings were to be used for non-religious functions. The abbey was taken for King Henry VIII and be let out to a David Sheghan, who had been a merchant of Cork for 21 years. By 1562, the land belonged to a John Brown and Edmond Gould who were forced to hand it back to the Catholic Church under Queen Mary. However, Queen Mary’s sister, Elizabeth I suppressed monasteries again during her reign and the lands were passed to a wealthy merchant named Andrew Skiddy.  It is unknown if Skiddy took up residence in the Abbey complex but by 1626, much of the buildings had been demolished except the walls of the church.

John Windele, an eminent Cork antiquarian related in his History of Cork in 1844, that on digging foundations for the current red brick houses in 1804, a number of stone coffins belonging to the Franciscan abbey were discovered. Amongst these was a stone coffin, sculptured with the figure of a sceptre with an incomplete inscription on the lid. The partial inscription was in Norman French and comprised of the following “Sa Alme hait merci”, which translated into English means “his generosity dislikes thanks”. The location of these stone coffins today is unknown.

Robert Day, an eminent antiquarian, related that on digging the foundations of present day Herbert’s Square on the North Mall in 1896, a stone was discovered with the date 1567 etched on it. In addition, a small plate of metal was found on which was etched a representation of the Nativity and a long inscribed description in Dutch. In addition, a font and a silver chalice were discovered. Both the font and chalice were sent to Whitechurch Chapel just north of the City.

792a. Plan of Shandon Abbey, from Map of Cork, late sixteenth century as depicted in Sir George Carew’s Pacata Hibernia, or History of The Wars in Ireland (1633), vol. 2, opp page 137.

792b. Shandon Abbey from A description of the Cittie of Cork/ Plan of Cork, circa 1602 by George Carew (source: Hardiman Atlas, Library of Trinity College Dublin) 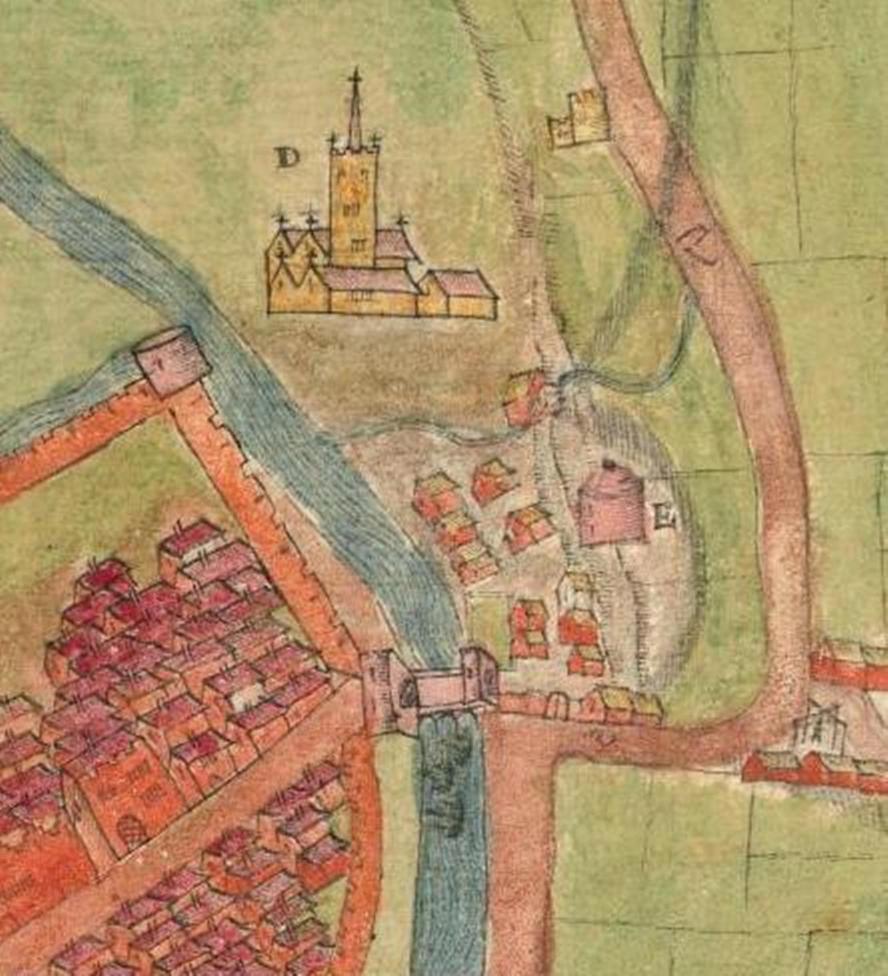 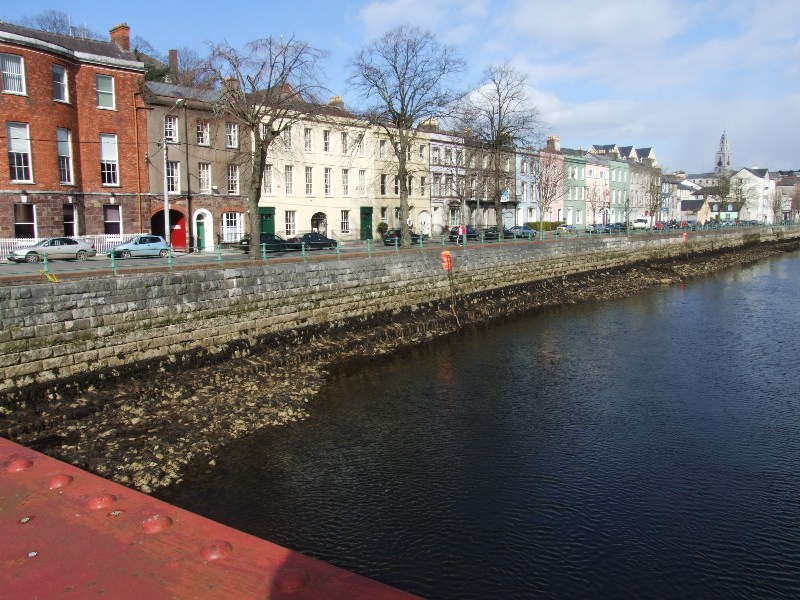