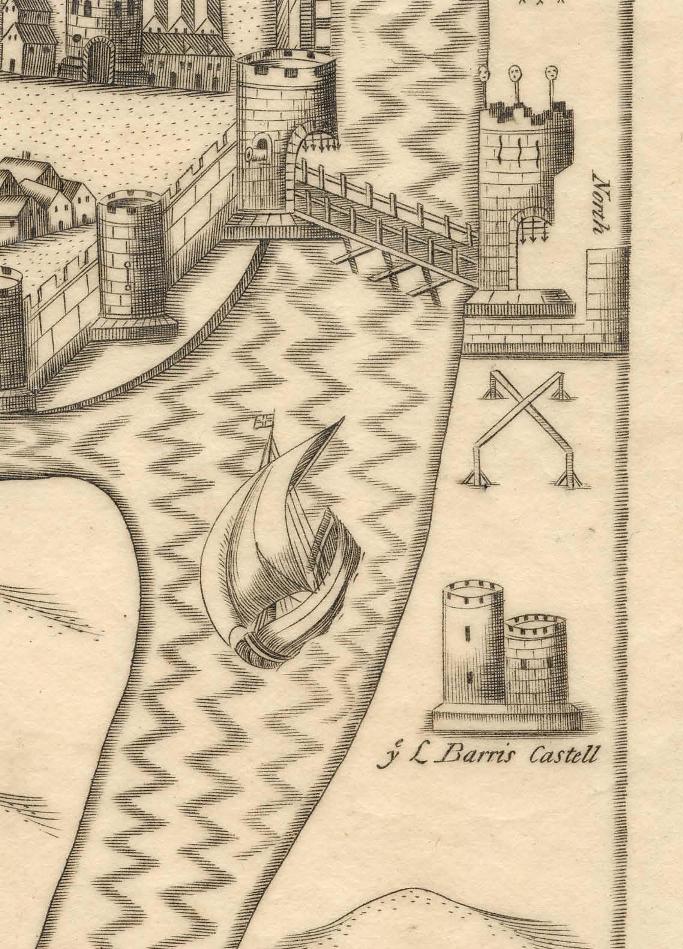 By April 1600, Shandon Castle had become confiscated and it became the official residence of George Carew, the Lord President of Munster. It became the centre of English power in the south of Ireland. Sir John Perrott, Sir Warham St Leger, Sir Walter Raleigh, Edmund Spenser and other Elizabethan notabilities held court and council within its halls.

In the first couple of months Carew described the defences of Cork as remarkably weak and not been able to withstand foreign attack from the Spanish navy in particular. In his opinion a strong garrison there was no use against an army that was masters in the field of war. Carew devoted much time to creating dissensions amongst the Munster chiefs who seemed likely to aid the invaders. In June 1601, James Fitzthomas, Earl of Desmond, was brought from Kilbehenny to Shandon Castle, and at the same time, Florence McCarthy More was treacherously arrested and detained there. Both were dispatched to the Tower of London for beheading. At this time there was a suggestion that Shandon Castle be demolished to keep it out of enemy hands. The discussion ended with no commitment to destroying the castle and that it would serve no military purpose, for every hills and ditch around the city commanded it just as well as Shandon did.

An article by John T Collins in the Journal of the Cork Historical and Archaeological Society in 1943 describes the fortunes of Richard Boyle, Earl of Cork. Boyle left Shandon Castle on the Monday morning following the English win at the Battle of Kinsale to convey the news to Queen Elizabeth. In the aftermath of the battle many Irish gentlemen were tried at Shandon for treason. Amongst them was Dominic Collins, the Jesuit friar, captured at the Siege of Dunboy. Carew ordered Dominic and two others to be kept prisoners after the siege while the rest were hanged in the market-place, fifty-eight on that day, and the remaining twelve four days later. The three surviving prisoners were brought to Cork for interrogation. As the other two had little to reveal, they were soon executed. But Carew interrogated Collins, hoping he could persuade him to become a Protestant and thus gain a propaganda victory. He alternately tortured Dominic and made him promises of elevation to high ecclesiastical office.

Some of Dominic’s own family visited him, urging him to save his life by pretending a conversion which he could afterwards repudiate. But Dominic would have none of it, and made a choice of a martyr’s death. Taken to Youghal on 31 October 1602, he was marched by a troop of soldiers through the streets to the place of execution. Left hanging on the gallows, the rope eventually broke and Dominic’s body fell to the ground. Under cover of darkness, local Catholics took his body away and buried him with respect in a secret place. From that day he was venerated as a martyr in Youghal and his fame quickly spread throughout Ireland and Europe. In the Irish Colleges of Douai and Salamanca the Jesuits showed his portrait and many favours and cures were attributed to his intercession.

Fast forward in time, and in 1603, the Mayor and Council of Cork refused to proclaim the new king, James I. Lord Roche made the proclamation from Shandon Castle. The citizens put Cork in a state of defence and demolished Elizabeth Fort so that it could be used against them. Lord Mountjoy arrived with an army and made them submit. One of the penalties imposed was that they should rebuild the fort they had broken down.

In March 1689, James II landed at Kinsale and came to Cork. He is said to have received the Earl of Tyrconnell, his Lord Lieutenant of Ireland, and his principal officers of state in Shandon Castle. Cork remained faithful to James II after the Battle of the Boyne, which led to John Churchill, Earl of Marlborough coming to Cork in an effort to reduce it to submission. In September 1690 Churchill drew cannons to Fair Hill and threatened Shandon Castle and its defenders, whose defenders withdrew inside the city walls. The troops occupied the castle and bombarded the city.

The suburbs, which were burned during the siege, were eventually rebuilt. Those around Shandon Street were in particular heavily damaged. St Anne’s Shandon was built in 1722 to replace the older church of St Mary’s, Shandon, which was destroyed in the siege of Cork in 1690 by English forces. The architecture of the church and tower is an early English style. The peculiar feature of the tall church tower approximately forty metres in height is that the north and east sides are comprised of red sandstone while the south and west sides are composed of grey hewn limestone. The limestone came from the ruins of the Franciscan Abbey, which existed on the North Mall while the sandstone came from Shandon Castle. Rising from the main tower, which is in the shape of a telescope, are three further tiers, which end in a curved dome. In 1770, any remaining ruins of Shandon Castle were cleared to make way for a complex of buildings belonging to the Butter Market.

791a. Plan of Shandon Castle, from Map of Cork, late sixteenth century as depicted in Sir George Carew’s Pacata Hibernia, or History of The Wars in Ireland (1633), vol. 2, opp page 137.

791b. Shandon Castle from A description of the Cittie of Cork/ Plan of Cork, circa 1602 by George Carew (source: Hardiman Atlas, Library of Trinity College Dublin) 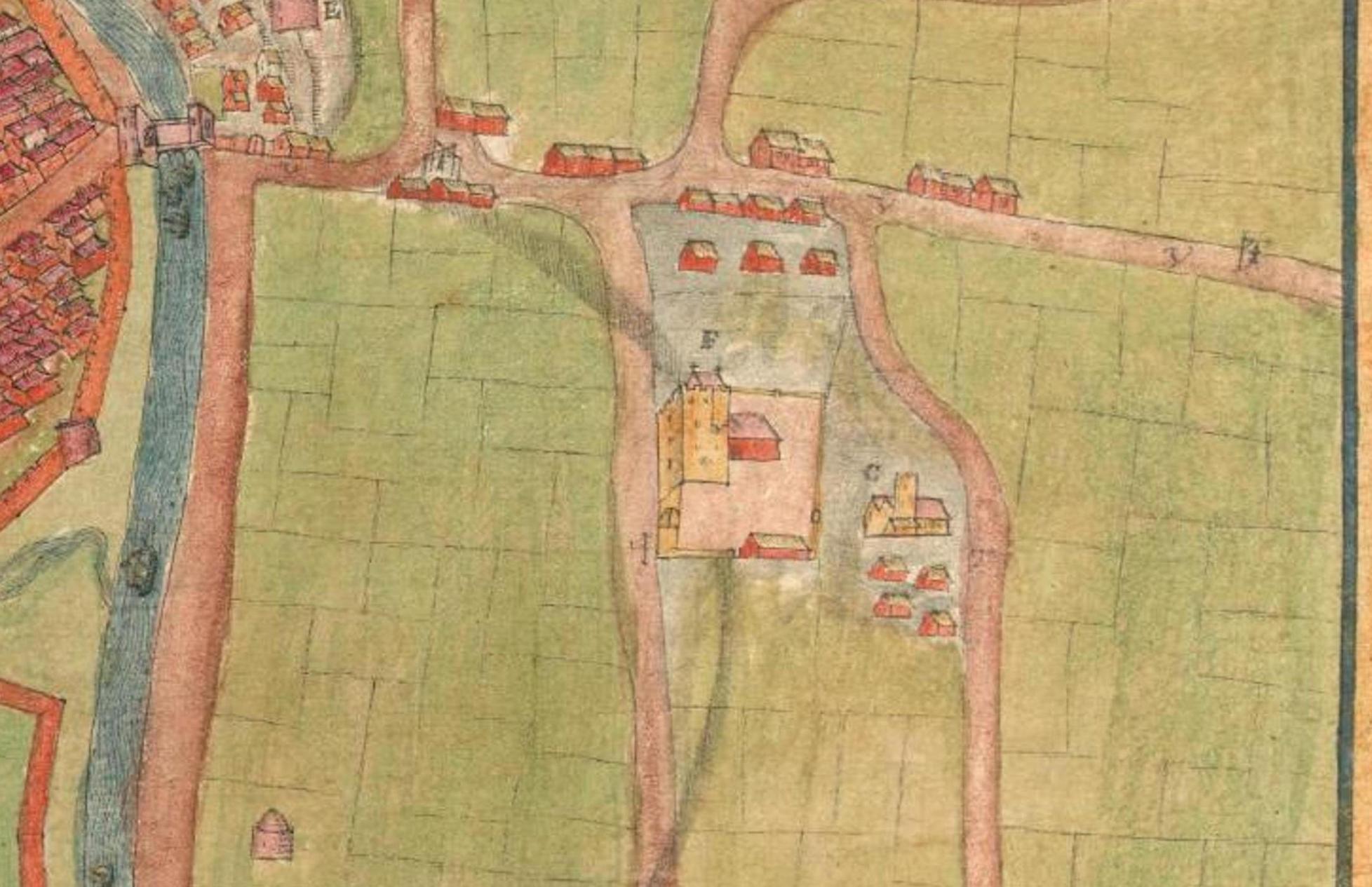