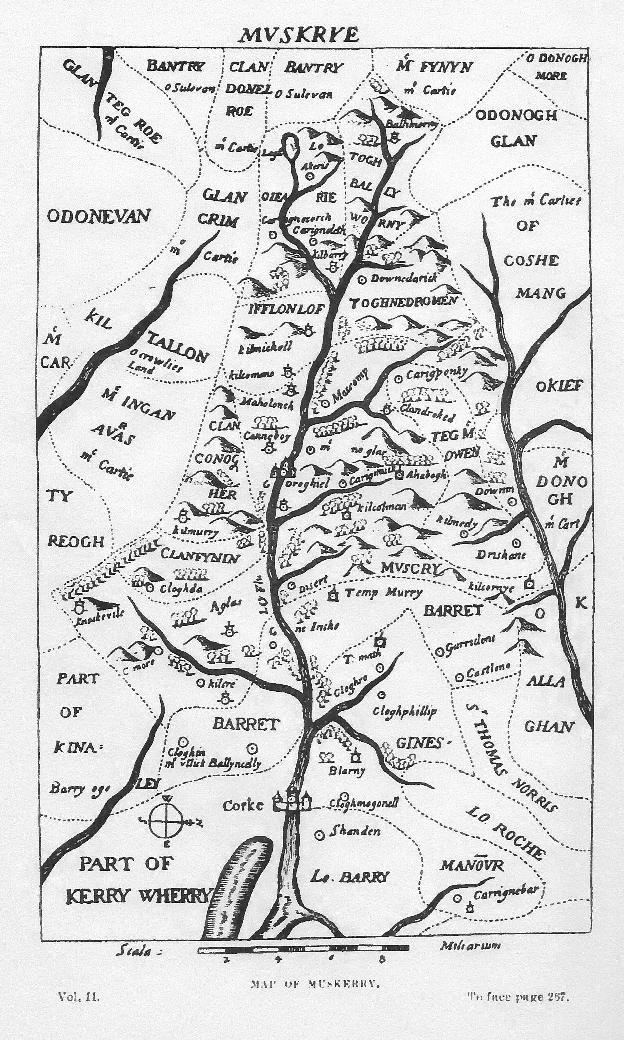 A Map of Muskerry

In late sixteenth-century Cork guardsmen at the top of Blarney Castle commanded a very fine view over a rich undulating landscape intersected by the River Blarney, and other streams, and bounded on the north-west by the lofty chain of the Boggeragh Mountains, and a view extending back the Lee Valley catchment area. It is difficult to imagine their world and how highly contested the landscapes of the region were amongst English and Irish families. A glance at a map called Map of Muskerry from the book Pacata Hibernia (1633) shows the extent of territorial control by English and Irish families. Castles abound the map.

From first view, it is a beautiful hand drawn map of the Lee Valley and its catchment area. The River Lee takes centre focus as the cartographer bends his representation to a west-east axis extending from the walled town of Cork as the base. The river is presented as an integral feature around which territory is defined. The river and its tributaries create what in an abstract way looks like a tree on which the memories of the families and their dwellings extend out from. Today it is perhaps the Cork-Macroom national routeway that takes precedence in this part of the valley despite the rich beauty of places such as Farran, Carrigadrohid and Canovee.

The map is insightful but a complex piece in the arbitration of identity and place in the region. It is an English-made map to control territory. The map had a huge role to play in identifying the political fault lines and landscapes in the catchment area. You can feel the tension in this drawn landscape. It is a highly politicised map, dramatic in its content through its shadings and lines – highly contested – a labyrinth of hidden meanings. It is accurate in much of its general detail. Every important corner is depicted, representations of crossing points of rivers, castles of English and Irish families and churches. Both the latter are gathering points for communities and have their own power structures – all controlling the local communities who engaged with them. The scenery drawn in it such as mountains and rivers add to the representation in lending to where territory starts and ends. The map reveals the extent of Irish landholdings – and how prominent families such as the McCarthys, O’Donovans, O’Keeffes and O’Sullivans were to the main English stronghold of the walled town of Cork and its harbour. The Barrys and the Roches seem to be the last bastions of old Anglo-Norman English families at the base of the map, who act a buffer zone between the town of Cork and its hinterland.

The map is rooted in a wider political context and appears in the published papers of Sir George Carew. Pacata Hibernia: or A History of the Wars in Ireland During the Reign of Queen Elizabeth (originally titled Pacata Hibernia, Ireland appeased and reduced; or, an historie of the late warres of Ireland) was first published in London in 1633. It offers Carew’s contemporary account of affairs in Ireland during the latter stages of the Nine Years War, as well as details on the conduct of the campaign in Munster. It is owing to Carew’s history-making ambition that the Munster wars are detailed. He instructed Thomas Stafford, his nephew, a young officer in his army, to record what he saw during the campaign and himself supplied him with valuable correspondence.

National biographies of Carew detail that he was Earl of Totnes (a market town and parish in Devon), a soldier and a statesman. He was born in 1558, probably at Exeter. After studying at Oxford, he and his brother Peter came over to Ireland in 1575 under the patronage of their kinsman Sir Peter Carew. After Sir Peter’s death, both of the brothers are mentioned as being engaged in the Irish wars. They appear as captains of a company of Devon and Cornishmen who landed at Waterford in 1579, and were afterwards appointed to keep the Castle of Adare, where they were besieged by the Earl of Desmond. Peter was slain in a sally, on 25 August 1580.

In 1580, a rebellion began in Munster against Queen Elizabeth. Many of the families who lived there, such as the Fitzmaurices, hoped to get help from the Catholic king of Spain to defeat Queen Elizabeth. The Earl of Desmond, Fitzgerald, did not put down the rebellion and was declared a traitor by the agents of the queen. His estate lands were burned and his tenants were killed. The Earl’s castles were also taken. In June 1584, a commission under Sir Valentine Browne surveyed southwest Munster, mapping out the lands belonging to a swathe of Irish lords associated with the rebellion, which were then granted to a small group of wealthy English Undertakers. The MacCarthy Mór clan, for example, lords of most of modern Cork and Kerry, declined to join the Fitzgerald rebellion and as a result they were spared the destruction that ultimately befell much of the rest of Munster, and avoided confiscation in plantation – hence the large tracts shown on the map of Muskerry belonging to Irish families.

As part of the Lifelong Learning Festival, Kieran will give a talk on Cork in the 1920s and 1930s in the Cork City and County Archives in Blackpool at 2.30pm on Friday 27 March (free, all welcome).

785b. Map of Muskerry, late sixteenth century as depicted in Sir George Carew’s Pacata Hibernia, or History of The Wars in Ireland (1633), vol. 2, opp page 267. 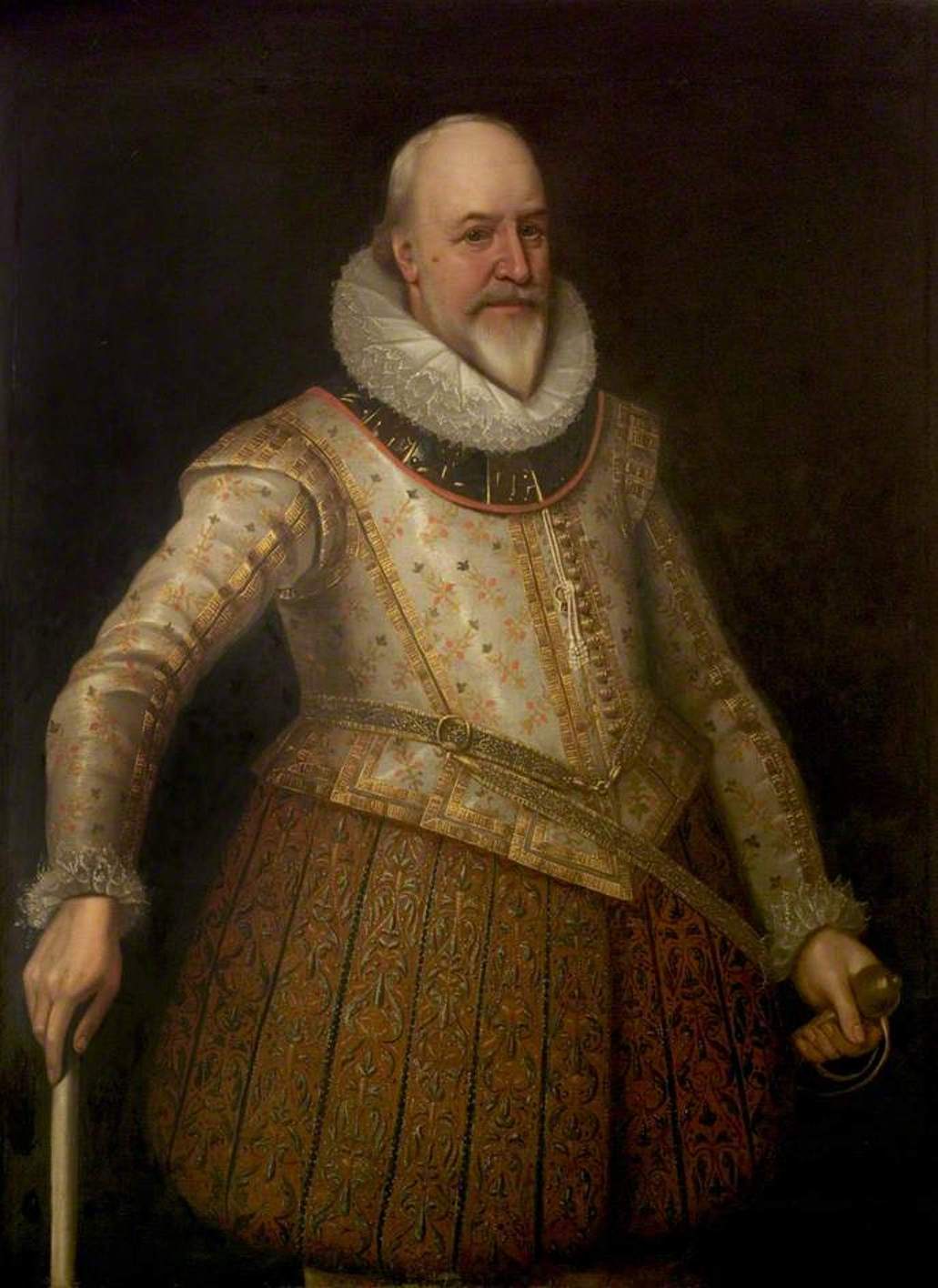