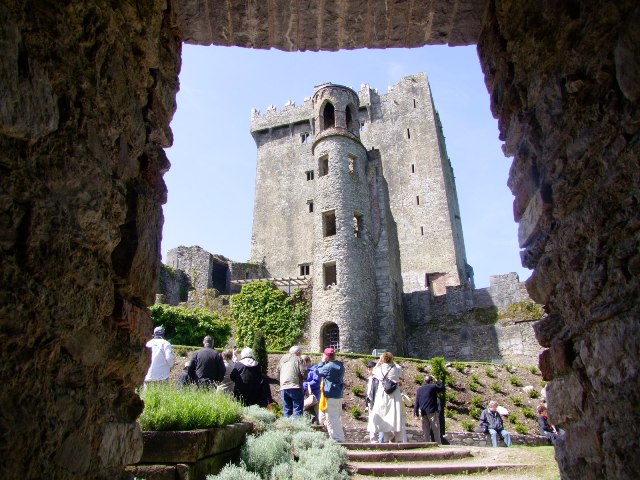 The halls of Blarney Castle by the sixteenth century witnessed its fair share of war councils. Rough maps spread on the castle’s central hall table, plotted territory held and tensions and conflicts at play in the Munster region. In our time we can only imagine these worlds of conflict and negotiation. Feuds between rivals the Fitzgeralds and the MacCarthys were on-going and long-standing. These events were punctuated by rebellions against the wider sovereign power. Tales of punishment dished out on all sides in the history books show the extent of legend making and mythologising of this violent period in Irish history. Indeed trying to read up on the multiple genealogies of the MacCarthys, you’re left wondering what is true and what is exaggerated but all are a fascinating read. Even the famous stone of eloquence emerges from the power of this mix of histories and myth, with no one story defining its origins.

In the year 1521, the head of the Fitzgeralds, James Earl of Desmond, burst with a powerful force into Muskerry. He ravaged, burnt and destroyed the territory until Cormac Oge MacCarthy led out an army against them. Cormac summoned the neighbouring chieftains to his assistance, pursued and overtook the Earl near Mourne Abbey, and inflicted on him what is described by scribes of the day a “severe chastisement”. It was after this that in 1528, Comac Oge attended Parliament as “Lord of Muscry [Muskerry]”.

The MacCarthys managed to hold their own during the sixteenth century, saved from the fate of the Desmonds, whose vast territories of over half a million acres were confiscated at the close of the century. In 1542, Teige MacCarthy, the eleventh Lord of Muskerry was one among eight chieftains of the country who made an “indenture of submission” to the crown, in which they agreed to refer all disputes between themselves to a commission of arbitration appointed for Munster, and consisting of the Bishops of Cork and Waterford, instead of appealing to the Brehon law or civil law judges of the region.

In the 1570s, the fourteenth Lord of Muskerry, Sir Cormac McTeige MacCarthy was rewarded for his allegiance. He kept his lands and received large grants of confiscated property. The lord had access to up to 3,000 men. Sir Cormac consented to adopt the royal device for passing down family property – surrender of his lands including Carrignamuck in Dripsey into the hands of the sovereign and to receive the same back by a re-grant. The crown rent was two hawks or £6 13s. 4d.

Shortly after the re-granting, on 4 August 1580, Sir James Sussex Fitzgerald, youngest brother of the Earl of Desmond, made one of a series of regular attacks hoping to rob cattle from the barony of Muskerry. Donal MacCarthy, the Lieutenant of Carrignamuck, assembled an army and attacked and completely defeated Sir James, with the loss of 150 of his men. Sir James was mortally wounded in the fight and was captured by a black­smith, who hid him in a bush till the fight was ended, and then delivered him. Sir Cormac ordered the confinement of James in Carrigadrohid Castle, three miles to the south west of Carrignamuck. Soon after, the captive was surrendered to Sir Warham St Leger, Com­missioner for Munster, who had him tried for treason. Sir James on his conviction was executed. His head and limbs were affixed to one of the drawbridges that led into the walled town of Cork. Donal, the lieutenant, was also mortally wounded in this action, by an arrow which struck him under the right ear, and penetrated six inches into his neck. He died some time after.

Donal’s death raised the next brother, Callaghan, then of Castlemore to the title of fifteenth Lord of Muskerry. A year later in 1585, Callaghan had passed the lordship to his nephew Cormac Mór MacDermod MacCarthy. In 1588, Cormac attended the English parliament as Baron of Blarney and because of the unsettled political nature In Ireland in the following year he surrendered his lands and to the crown and obtained a re-grant.

Fast forward to Charles II, in 1658, he conferred the title of Earl of Clancarthy on the head of this family, the last of whom was dispossessed after the siege of Limerick. Hence the estate, comprising all Muskerry and its castles, were forfeited to the crown for the earl’s adherence to the cause of James II. On the sale of the forfeited lands in 1692, the Hollow Sword Blade Company purchased all the land around this place, and more than 3000 acres in the parish were allotted to a member of the Company, and were held by his descendant, George Putland, Esq., of Dublin. Blarney Castle was purchased in 1701 by Sir James Jefferies, Governor of Cork, who soon after erected a large and handsome house in front of it, which was the family residence for many years. Complete with a mythic stone of eloquence, the story of the MacCarthys took a new course especially as the late nineteenth century progressed and the rise of mass tourism to the castle began.