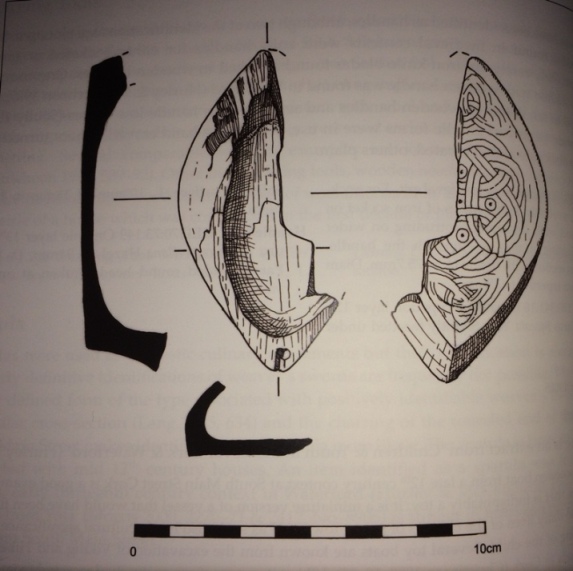 The recent publication Archaeological Excavations at South Main Street 2003-2005, edited by Ciara Brett and Maurice Hurley, brings many nuggets of information to the public realm on early to mid twelfth century Cork. Amongst several objects found was a little toy boat (p.202), about 10cm in length (with one half missing), with one side grooved out and the other having a very elaborate tracery design. Here is an object lost in the fragmented timber wreckage found on South Main Street, found at the old seeping and reclaimed edges of a marshy island. One can almost imagine a young person playing with the boat at the water’s edge – and the bobbing up and down action in the water of this cherished object.

The boat, small though it is, was once a part of someone’s daily landscape, their life, and their surroundings. Perhaps, the owner regularly played with it; perhaps there was a mini fleet of toy boats. It inspired someone to think differently about their surroundings. The young owner may have envisioned the immediate meeting of land, river and sea as a space of recreation, of possibilities, of dreams and a place of re-imagining old and new worlds. Perhaps the long rushes and reeds created a hiding space for imagined enemies. The boat may have meant so much to someone and held their ideas, future prospects and hopes when they played with it.

However for us, in the present, the memory of the boat is beyond our personal memory. The knowledge of living in twelfth century Cork has not survived the test of time. This fragment of an artefact from their landscape offers us a way to identify with them, their perception and their lives. We can broaden, narrate and animate more parts of their story. It’s like a window into the past but it is also a looking glass because it innately tells us something about ourselves. It also allows us to contrast and compare cultural evolution through time and space, centuries ago children were plying with model boats. That being said with all the developments, the cultural transformations, the changes to the landscape, to our identity, taking all of this into account, it’s amazing that children still play with model boats. So much is different yet some things remain unchanged.

The toy boat is rooted culturally in wider European Viking age settlements. This year coincided with a large exhibition on their life and legacy in the British Museum during the summer and which now is on display in Berlin. Entitled Vikings, Life and Legend, the exhibition brings together the various strands of thought on Viking colonisation a thousand years ago in north west Europe and beyond. What is revealed is the depth of their culture, their interest in arts and crafts, their ability to practically own the ‘sea highways’ of their day. Ships on the seas were central to how their culture spread, was maintained and framed for their ancestors. In the exhibition, the organisers detail that the first Viking campaign in England took the form of scattered attacks, but in 865AD the Vikings arrived, and in successive years conquered almost all of eastern England, the Dane-law. In France and Germany the Vikings met a strong monarchy. Nevertheless they attacked the Frankish coastal areas in the early ninth century.

Around 920AD they controlled much of Britain disparate parts of Ireland. By the eleventh century, they had conquered enormous tracts of England and founded and built towns. Cork was part of these networks of flows of knowledge between different Viking ethnic towns in north-west Europe. The extent of the networks of Cork’s Hiberno-Norse society (Viking ancestry and Irish Viking relationships) is relatively unknown though.

The other remarkable aspect of the toy boat object is its ‘clinker style’ look and the carved Celtic like tracery on its base. Ongoing re-construction work at Roskilde Ship Museum in Denmark reveals that Viking Age ships were clinker-built. Characteristic of this construction technique of that the ship’s shape is created as an empty shell of strakes or longitudinal strips of timber, after which internal stiffening beams are added. The overlapping planks are caulked with wool and tar and are riveted together with iron nails. Over the last 1,000 years the Scandinavian clinker technique has been preserved in the traditional Danish, Norwegian and Farose boats used for fishing and transportation and the construction technique has left traces in the French, German and British and Irish boatbuilding culture.

Three re-used timbers, interpreted as possible ship timbers from clinker-built vessel, were revealed at excavations at 40-48 South Main Street. The tree ring and scientific analysis of one of these timbers reveals that it was “derived from a mature oak felled after 1037 AD from southeast England, probably in the London area” (Nigel Nayling, p.203). The presence of iron fastenings securing oak planks at an overlap with luting of animal hair and tar were also present. The timbers had been reused as a base pad for one of a number of large upright posts, possibly part of a timber-framed house – the very first settlement foundations of Cork City are sitting on ship’s timbers and link to stories and culture further afield.