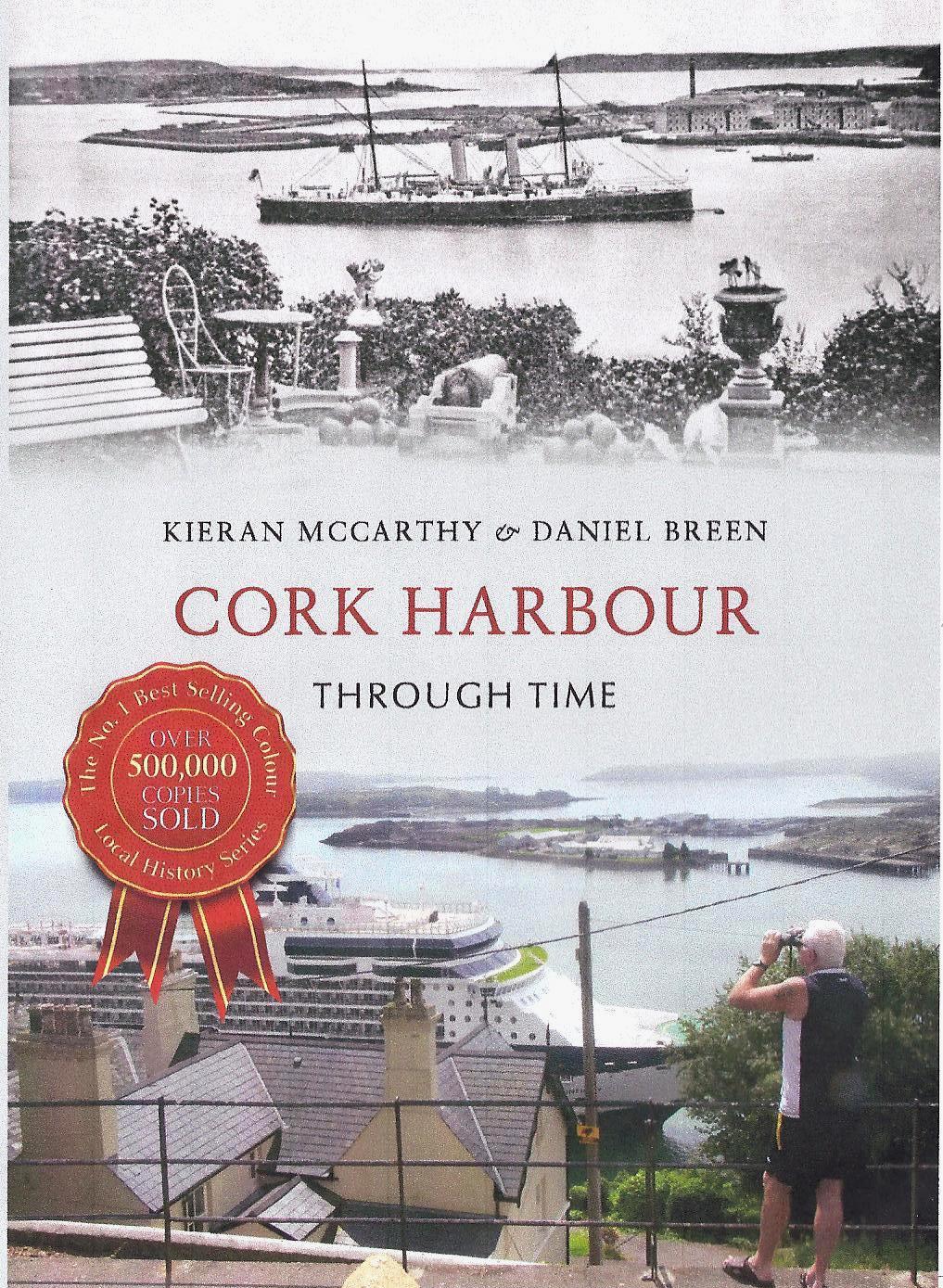 How do you capture a harbour in all its beauty? Being the second largest natural harbour in the world brings a focus and energy that Cork Harbour has always been open to. The ebb and flow of the tide through the ages has carved a unique landscape of cliffs, sand and gravel beaches that expose an underlining geology of limestone and sandstone. Invigorating this landscape are multiple monuments from different ages, many of which the postcards in my new book with Dan Breen seek to capture.

Colourful villages provide different textures and cultural landscapes in a sort of cul-de-sac environment, with roads ending at harbours and car parks near coastal cliff faces and quaysides. The villages are scattered around the edges of the harbour, each with their own unique history, all connecting in someway to the greatness of this harbour. Walking along several junctures of fields, one can get the feeling you are at the ‘edge of memory’. There are the ruins of old structures that the tide erodes away. One gets the sense that a memory is about to get swept away by the sea, or that by walking in the footsteps trodden by photographers 100 years ago, one could get carried away by their curiosity. This new book tracks the space and historical context of 100 postcards in Cork Harbour, many of which were taken c. 1900–20.

Many of the sites have been written extensively on over centuries, while others await proper exploration and critique. Chapter 1 begins in the city and takes the reader from Ireland’s southern capital of Cork City eastwards into the River Lee’s tidal estuary. This city is built on a shifting landscape of sand, gravel, rushes and reeds, a wetland knitted together to form a working port through the ages. In Cork City Through Time (2012), we showcased the old postcards of Cork City. Moving eastwards past the port, the river begins to spread in width, creating vast scenic vistas along areas like the marina, extending to the late seventeenth-century structure of Blackrock Castle and beyond, to the reed beds of Lough Mahon and Douglas Estuary. All are hidden places of beauty, much of which may be explored by the amenity walk along the old Blackrock & Passage Railway Line. When the line opened in 1850, it hosted 200,000 people in the first six months. In 1903, this line was later extended to Crosshaven. The resonances of such a venture are echoed along the walkway as old platforms, ivy clad stone-arch bridges provide legacies to admire. Passage, the first terminus for the railway, was once a shipbuilding centre of the south of Ireland. Nowadays, old quaysides and eerie, abandoned warehouses haunt the area. One can almost hear the hammers and whispers of workers’ repairing and patching together ocean-going ships. Further along the river, Monkstown provides insight into the past with its colourful Victorian mansions.

The same can be said about the scenic wooded village of Glanmire, the iconic Father Mathew Tower and Fota House. All exist as rich storehouses of memory and are awe-inspiring to walk around at any time of the year. Chapter 2 takes the reader on a journey through some of the landscapes on Great Island, and naturally Cobh is a central focus. Drawn through several centuries and photographed since the invention of the camera, it is difficult not to be drawn to the town’s rich architectural steeple and exterior artwork on the late nineteenth-century construct of St Colman’s Cathedral. Cobh has stunning scenic quay vistas and a colourful selection of buildings. The town is also known for its stories of emigration and the legendary Titanic. One can feel its journey across the ocean and the role the town played in its part in the North Atlantic’s human history.

The sites and spaces seen from Cobh’s specifically constructed building parapets are explored in Chapter 3. The harbour islands such as Spike Island and Haulbowline have histories dating back over 400 years. They were first fortified by star-shaped forts and secured for the expanding British Empire. Two more forts exist near the entrance to the Harbour, Camden Fort Meagher and Fort Davis. Originally built in the 1780s, one can explore the town’s military history and connections to a far-flung British empire through the harbour’s role in securing its might and power. However, one is humbled by stories of the Irish War of Independence and how these forts in time were secured by the Irish Government as Ireland’s last lines of defence. Today, these represent large community-based tourism projects.

Chapter 4 explores the eastern shores of Cork Harbour. Here lies the great market town of Midleton, the old large malthouses of Ballincurra, the ancient tower at Cloyne, the quaint spaces within villages at Rostellan and Whitegate, and the ruins of old houses. Connect these with industrial projects such as Whitegate Oil Refinery, and family holiday centres such as Trabolgan, and all reveal rich stories. However, standing overlooking all within the harbour is the great lighthouse at Roches Point, warning ships of imposing rocks and providing a grand entrance gateway to the harbour. On a clear day, the views show a canvass of stories and memories.