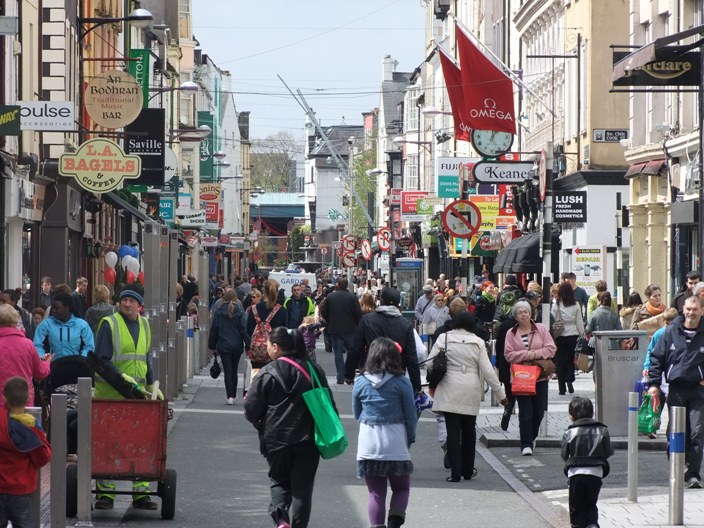 It is true to say that Cork City and County is lucky with the calibre of dedicated Council library staff, who bring their enthusiasm and knowledge to bear on their collections. Since 1892, Cork City Libraries has provided a service to the citizens of Cork. Part of that valuable service has been a local history element for the people of Cork and beyond, as well as for researchers, students of all ages, and writers.

For nearly forty years, the enormous collections of local history materials that Cork City proudly possesses was developed and minded by recently retired librarian Kieran Burke, who for all intensive purposes, was their guardian. Up to a decade ago, the city’s library service was available only to people calling in person to the library premises. However, since 2004, online library services are available through two websites: (i) the general library website at CorkCityLibraries.ie (where, for example, you can search the book catalogue or request and renew borrowed items), and (ii) the popular Cork Past and Present website.

For over a century, if an enquirer wanted to check a historical map of Cork, or if they wanted to check an old street directory showing who lived in what street or what business was carried on there, they would have had to call to the library premises — and only during opening hours. Now since 2004, with the online service of the Cork Past and Present website, people can browse the local history treasures of the Library from the comfort of their homes, from their place of work or recreation, or while travelling, or even when out of the country.

City Librarian Liam Ronayne has driven the expansion of online library services since his appointment as City Librarian in 2004. He established a special eLibrary Services department to develop online library resources. Arising from these developments more material is digitized every year and added to the Library webpages, providing 24/7 access to anyone requiring it. For nine months up to last summer, three new sections to its websites were developed. The first section deals with two decades of theatre in Cork city from 1972 to 1991 showing 4,000 high-quality photographs of theatre productions in Cork. Another new web section presents brief accounts of the Shandon area with some images. The third addition contributes to understanding the stronger identity, which pervades in Oliver Plunkett Street, a vital and busy spine running through our city centre. As well as having intrinsic interest, these new web pages support the efforts of the businesses in our city streets to focus greater attention on the historic and overall attractions of the city centre. With so much nostalgia in the City Centre, it offers a rich cultural experience hard to beat.

The new web pages on Oliver Plunkett Street explore the historical development of the street from its beginnings in the early eighteenth century – the challenges posed by building on a marshland, a number of buildings of significance on the street, and also charts the history of some of the long-standing retailers synonymous with Oliver Plunkett Street. Some of the intriguing images show an auction of greyhounds in the former Conway’s Yard, now part of Casey’s furniture store and car park. Other pages remind one that the lovely limestone-clad building behind the EuroGiant shop was once a nineteenth century Congregational Chapel, or that today’s Saville menswear shop was a cinema (the Imperial Cinema) from 1913 until the 1950s. The Karizma Turkish barber shop on the corner of Oliver Plunkett Street and Princes Street was the site of the city’s first purpose-built theatre which opened in 1732 and operated out of there until the Theatre Royal moved in 1760 to where the GPO is today, where the theatre house survived until the postal authorities purchased the premises in 1875.

Notable for its striking Tudor-revival facades and indoor architecture one can read about the history of Winthrop Arcade. It was officially opened by Lord Mayor Seán French on 1 May 1926. The arcade was one of the first shopping malls opened in Ireland and survives today in its original design and purpose. The man responsible for establishing the arcade was Cork businessman Patrick Crowley. Guy’s business directory for 1913 records that he operated a public house named ‘The Arch’, at 7 Winthrop Street. His business and properties on the site of the future arcade were destroyed by rampaging British forces during the Burning of Cork in December 1920. He invested the financial compensation he received following the event, along with funds of his own, to create the Winthrop Arcade.

Other retailers, including, Liam Ruiséal Teoranta, Cronin’s Menswear, Casey’s Furniture, Keane’s Jewellers, M J Galligan Furnishing Fabrics, the Uneeda bookshop, and Minihan’s Chemists. There is even a section about Oliver Plunkett Street as an area prone to flooding and its links to the development of the swampland. Cork City Libraries is to be commended for its ongoing efforts to add to the cultural richness of Cork city and for providing greater access both through its seven premises throughout the city and through its webpages, such as this new section on Oliver Plunkett Street, which everyone should browse.

My thanks to John Mullins, Cork City Library and Lord Mayor Cllr Mary Shields for their help with the above piece.