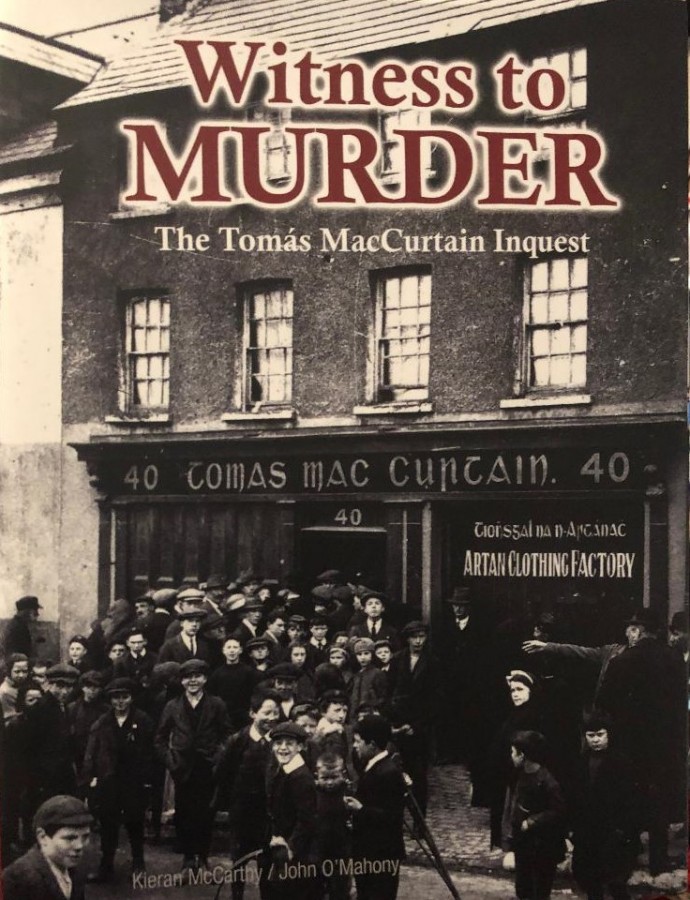 The new book Witness to Murder by John O’Mahony and I is a transcript of the Tomás MacCurtain Inquest from March and April 1920. Tomas (1884-1920) is truly a colossus in Cork history who has attracted many historians, enthusiasts and champions to tell his story. His story is peppered with several aspects – amongst those that shine out are his love of his family, city, country, language comradeship, and hope – all mixed with pure tragedy. In many ways, the murder of Tomás MacCurtain on the night of 19-20 March 1920 changed the future public and collective memory narrative of Cork history forever.

One hundred years on after his murder, the memory of Tomás and his life and times and works are a central part of the history of politics in the city and the city and region’s role within the Irish War of Independence. Remembrance is carried through a variety of ways – books by local historians and seasonal historical newspaper articles in for example the Irish Examiner, yearly exhibitions in Cork Public Museum and Cork City and County Archives, conferences at University College Cork,  portraits and sculptures at Cork City Hall, and annual speeches by incoming Lord Mayors. Annually the MacCurtain family work closely with Cork City Council and community groups to highlight his memory and without fail every 19-20 March there are memorial civic ceremonies and political and community group ceremonies. All of the latter examples keep the candle lit on his story, legacy and memory. Indeed, one can say his narrative is highly structured as he retains his position amongst Cork top historical figures.

As the news got out into the public realm after the murder of Tomás MacCurtain it sent shockwaves throughout every household – he had been Lord Mayor for less than 50 days an just 36 years old. People began to discuss their relationship with Tomás within Cork City. Some revered his character and work. Others saw his work as another part of the way of life of a busy port city, which had many activities happening on any given. But for a time in Cork, his murder brought the city and region to a standstill. This was another intensification of all-out war held across the streets of Cork that in time would be named the Irish War of Independence.

The out-pouring of public grief was heard in the speeches in the days following through his successor to the Lord Mayor’s chain Terence MacSwiney, by fellow Corporation members, by MPs in the chamber of Westminster and visibly seen in the enormous turnout on the streets of Cork during the funeral procession. In the weeks that followed the civilian inquest of his death revealed more questions than answers to who actually killed him. The verdict proposes that it was a government and RIC cover-up but unfortunately, no official statement has ever come forward. So, in truth history will never be able to officially record who killed him and who the masked person was who pulled the trigger. That’s why the revisiting of his inquest is important.

The last time Tomás’s inquest in full was published was in the Cork Examiner between 23 March 1920 and 18 April 1920. Despite the ordeal and daily fallout from the interviews, over time the fourteen hearing sessions have not overly been revisited by scholars of the Irish War of Independence. The verdict has been highlighted on many occasions by many historians, but the information of the inquest has never been overly written about or the narratives within it championed.

So, this book firstly is about bringing together the data inquest into one source. It is about giving a voice to the solicitors, jury and those interviewed (see more in the next few weeks).

Secondly, within the interviews and the remarks of Counsel, jurors, and solicitors, the frustration is plain to read plus one can view the complex relationships of all sides of the debate. The interviews and the answers given also provide multiple narratives on what life was like to those who interacted in the power play with authorities in the city, the nature of policing but above all the raw emotion attached to the murder of Tomás. On the raw emotion element, the witness statement by his wife of Elizabeth and family, and even the account of the bullets in his chest makes for harrowing reading.

Thirdly, the publishing of the data is a nod to the Cork Examiner journalists present at the time who wrote up each verbatim what witnesses said from each individual session, and turned around the information in just a few hours, so it could be published in the following day’s edition.

Fourthly it is my hope that this transcript of newspaper text will help scholars of the War of Independence in their research to mine down further into the complexities of the time but also to keep the human dimension at the heart of new emerging research. This transcript in particular is inspired by the epic Atlas of the Irish Revolution and the ongoing digitisation of State files and interviews of veterans of the War of Independence held at the Bureau of Military History in Cathal Brugha Barracks, Dublin– both sources, the Atlas and the Bureau try to bring a holistic perspective to what narratives, sources and memories have survived.

The book has an epic amount of valuable historical information but one, which I hope will help assist to create a roadmap of sorts in commemorating the life and legacy of Tomás MacCurtain in the next hundred years and place the inquest at the heart of future scholarship on Cork’s role within the Irish War of Independence.

Witness to Murder by Kieran McCarthy and John O’Mahony (2020, Irish Examiner) at this moment in time is only available to buy online at www.examiner.ie. Stay safe to everyone.

1043a. Cover of Witness to Murder by Kieran McCarthy and John O’Mahony (2020, Irish Examiner).