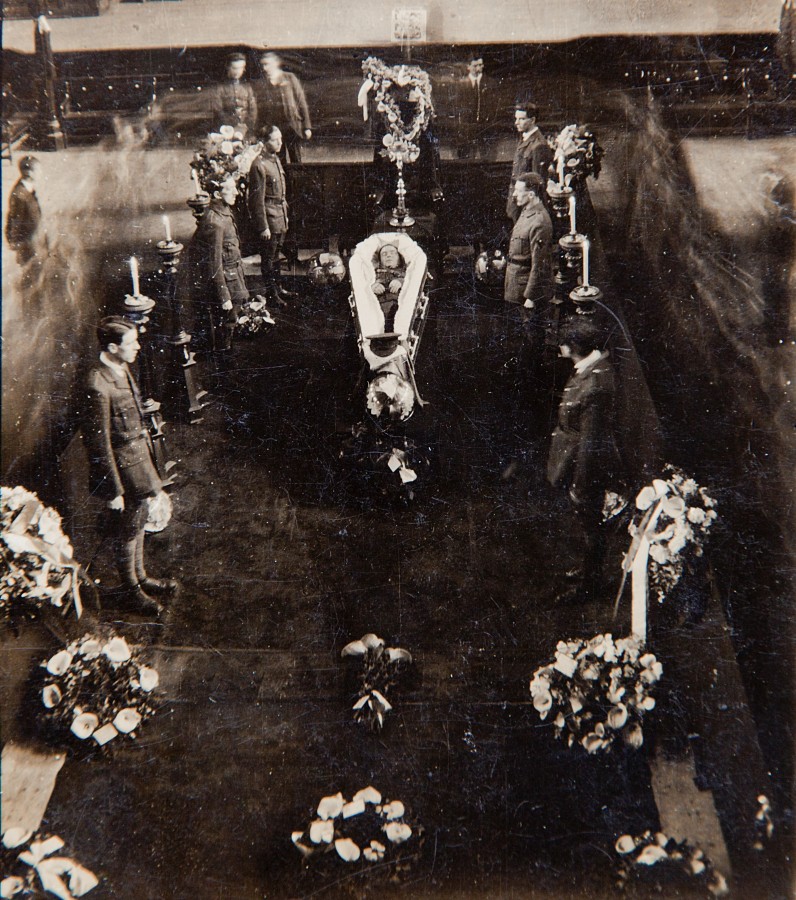 Remembering 1920: The Funeral of Tomás MacCurtain

Within just a few hours of his death in the early hours of 20 March 1920, the coffin of Lord Mayor Tomás MacCurtain was carried by hearse from his home in Blackpool to Cork City Hall. Heartrending scenes were witnessed. Men and women knelt down in the street and wept. Such was the intensity of the crowds that sections of Volunteers had considerable difficulty in managing the crowds and local traffic. The streets around Blackpool Bridge became absolutely impassable. Contingents of Sinn Féin members, members of trade and labour bodies, members of Cork Corporation and many more crammed into the area. A pipers’ band played the Dead March on the route to City Hall, and the procession of mourners, extending over two miles in length, included a large number of clergy and public men. The police were withdrawn, from the streets of the city.

Everyone wore the tricolour draped in black, and all the window blinds in the city were drawn as a mark of respect. The 1st Battalion of the Cork Volunteers acted as bodyguard, and at City Hall a party of the men remained to watch over the coffin throughout the night. The business of Cork City Hall was suspended for the removal and the funeral the following day. The Republican Flag was at half-mast above the municipal civic emblem, and on the door of entrance hall appeared, a card bearing the inscription, “Closed in consequence of the murder of Tomás MacCurtain, first Republican Lord Mayor of Cork”.

Upon the coffin was a plate bearing an inscription in Gaelic, translated as “Thomas MacCurtain Commandant, 1st Brigade, Cork, Army of the Irish Republic and Lord Mayor of Cork, who was foully done to death by the servants of the foreigner on March 20, 1920, in the fourth year of the Irish Republic, at the age of 37 years. MAY GOD HAVE MERCY ON HIS SOUL”.

All national and regional Irish newspapers carried the story of the funeral. Many, such as the Cork Examiner, list the public bodies represented at the Church, which reflect the depth of respect for the Mayoralty of the city. Some of the those included the Chairman and members of the Queenstown Urban Council. Queenstown Trade and Labour and Sinn Féin organisations, Mallow Rural and Urban District Councils, Youghal, Clonakilty, Bandon and Skibbereen Councils, North-East Cork Executive Gaelic League, Southern Land Association, Cork Medical Association, and New Ross Urban Council.

After the High Noon mass, the funeral procession started to St Finbarr’s Cemetery. The coffin was shouldered by six Volunteers in uniform. The Bishop in his carriage came next. The clergy, numbering about a hundred; Christian Brothers and presentation Brothers followed, who wore Sinn Féin mourning rosettes. Then came the Volunteers Piper’s playing “Wrap the Green Flag Round Me”. Behind was Fr Dominic who was the Lord Mayor’s Chaplain, who was accompanied by Cllr Terence MacSwiney and other officers of the volunteers. A carriage laden with wreaths followed and behind them were 25 volunteers, each carrying a wreath. Each wreath comprised an abundance of lilies and daffodils, and long flowing green, gold and white ribbons. The chief mourners walked behind, behind which was members of the Corporation, Harbour Board, and public bodies and organisation. However, the general public comprised over 10,000 people. It took one hour and a half to pass any given point.

From the North Cathedral to St Finbarr’s Cemetery, the distance was just over four miles via King Street, Merchants Quay, St Patrick’s Street, Washington Street, and Western Road. At the Western Road entrance to Cork Gaol, an open space was preserved by Volunteers to enable the political prisoners to obtain a view of the cortege as it passed from their windows.

At the cemetery, Bishop Cohalan blessed the grave. When it was covered, the Last Post was sounded and three volleys of shots were fired. 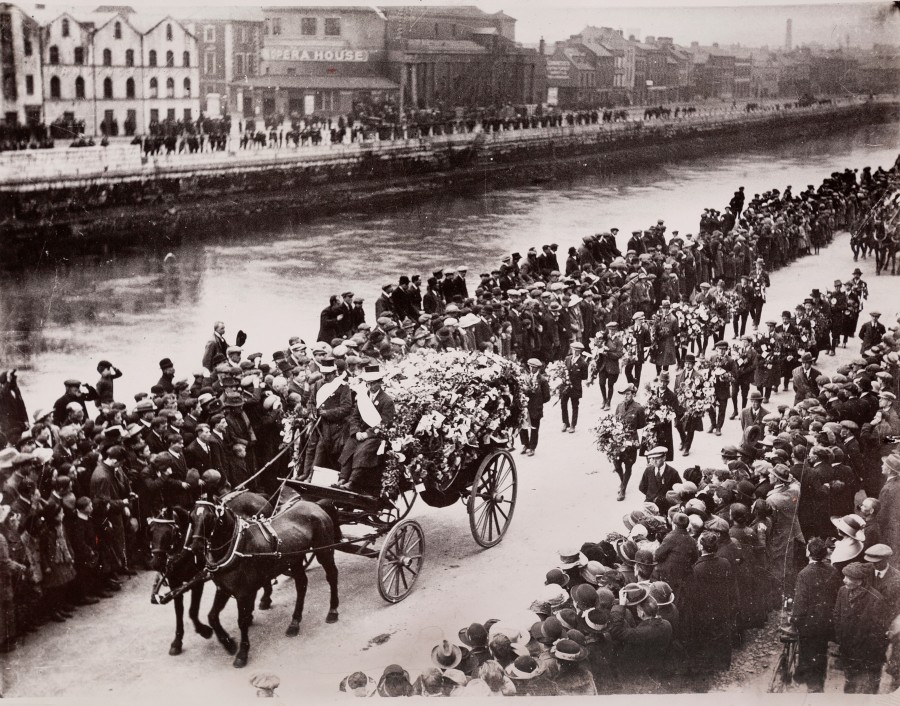