Remembering 1920: The Murder of Tomás MacCurtain

One hundred years ago on the night of 19 March and the morning of 20 March 1920, Tomás MacCurtain (1884-1920), was murdered at his home in Blackpool. His murder is linked to the tit-for-tat violence between the Royal Irish Constabulary (RIC) and the Irish Republican Army (IRA). For example, on 10 March 1920 District Inspector McDonagh was shot dead by IRA members. The response by the RIC was the ransacking of Sinn Féin clubs and the homes of key members such as Seán O’Sullivan and Professor William Stockley. On 19 March 1920, RIC Constable Joseph Murtagh was shot and killed by the IRA near the City Centre. The RIC response was quick and this time Brigade no 1 Commander Tomás MacCurtain was to be the target. He was murdered later that night. The details of the murder were detailed by his wife Eilís in her inquest interview some days later, of which I lay out below.

Tomás and Eilís MacCurtain had lived for some years at 40 Thomas Davis Street in the heart of Blackpool. By March 1920 they had five children living, of whom the youngest was ten months. In addition to her late husband her three-sisters, brother, two nieces, and a nephew lived in the house. Eilís went to bed at 8.30pm on Friday night 19 March 1920, but she could not say when her husband retired. Sometime during the night she heard a tapping as with a man’s fingers at the door, and sometime after that she heard the door being broken in. After she heard the tapping, and before it was being broken, in, she looked out of the window and asked who was there, and those below said, “Come down”. She asked, when they were breaking in the door, if they would give her time to dress. But she got no reply. “I had a candle lighting in the bedroom”, she said. “My husband got up out of bed and said, ‘Lizzi, I will go down myself”.

Eilís went to the door and opened it. She had a candle in her hand. A man rushed in with a blackened face. One man outside the door then asked “where was Curtain?”, and she said that he was upstairs. Six men rushed in the hall—four tall men and two small men. The two smaller men carried rifles, which they held against their side. One gave orders to hold that her, and the second tall man turned around and caught her and shoved her towards the door. He wore a big overcoat and cap. The men immediately went upstairs, with the exception of one who stood beside me at the door. They were not up several steps of the stair when she heard the firing of rifles or revolvers. When they were upstairs the baby that was in the room of Eilís and Tomás cried. Eilís called out “you have mothers, and I am a mother; for God’s sake let me bring down the baby”. The baby stopped crying when shots were fired. When the crying stopped she thought the baby had been shot.

Shortly afterwards as the six men left the house they shoved Eilís out before them on the street, where she cried for help. She asked if someone could go for the priest, that her husband was shot. There were ten or fifteen men on the road outside the door then. The six men who had been in the house were part of that group. Her brother was also calling out for a priest from a top window, and after an order of “fire” was given the body of men faced the door and fired up towards the windows. The groups left and immediately, she closed the door and saw no more of them.

The body of Tomás was taken from the floor and placed in the bed. Eilís remained downstairs for some time after the men left as she telephoned for a priest to the North Presbytery, and there was some difficulty in getting communication. She, however, succeeded in getting the priest. Before the priest arrived, she went upstairs and addressed her husband by his Christian name, and Tomás opened his eyes. Eilís then telephoned again for the priest, the ambulance, and the doctor. The priest arrived first and heard his Confession end administered the Rites of the Church, but he was dead when the doctor arrived.

At 20 minutes past 1am on Saturday 20 March the telephone of Dr William O’Connor on St Patrick’s Hill rang. He was told by a man at the exchange to hurry to Blackpool – that the Lord Mayor Tomás MacCurtain had been shot and was very bad. Being connected to the MacCurtain phone he heard Mrs MacCurtain’s voice who said the Lord Mayor was shot and she was afraid he was dying. The doctor immediately dressed, got some surgical dressings, rushed out and got a car on Patrick’s Bridge which took him to Blackpool immediately. When he got to the house he found the Lord Mayor lying on the landing, On examination, he found he was dead. His shirt was stained with blood and he had two wounds on the right side of his chest. Dr O’Connor did not make any further examination under the circumstances but made a postmortem examination on the following evening.

An hour after the murder Eilís was downstairs with the baby in the shop when a second visit was paid to the MacCurtain house. There was another tap at the door, and she asked “Who was there?” and the answer was: “Military, open”. She opened the door, and was met with four bayonets to her face, I asked; “In the name of God, what do you want now?” and I got no answer. I then said: “Didn’t ye tear the heart out of him with bullets, and do you want to get my brother, now?”. About six soldiers went into the house with fixed bayonets and four remained outside the door, and two on the street outside. One was familiar to her. He was an RIC officer stationed at Blackpool. The group left after checking the body of Tomás.

1040b. Crowd outside MacCurtain House, Blackpool Bridge, the day after the murder of Tomás 20 March 1920 (source: Cork City Library). 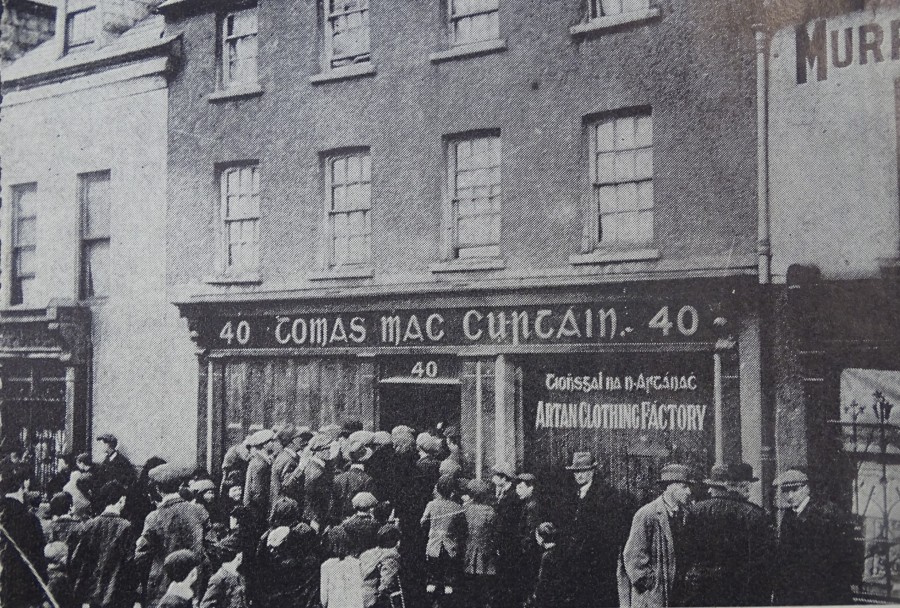