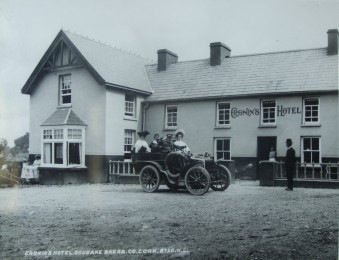 A Stronghold of Ireland

“The silver lake between the high stony mountains seems always in motion, as befits the source of the River Lee…Gougane Barra is associated with the sound of soft, lapping water, the only sound, which, instead of breaking, rather accentuates the silence round where Finbarr’s cell stood…the island itself is one grand bouquet of light green foliage rustled by the wind, with few fir trees here and along the shore. Reeds sway near the water’s edge, in utter silence and simple loveliness, as befits a hallowed spot where the memory of a great and saintly man is still real and near” (writer called Spectator, Irish Independent, 25 September, 1940, p.4)

Continuing to explore tourism growth in Gougane Barra, the summer of 1936 coincided with the Irish Tourist Association stepping up their work to get more American parties to travel to Ireland. The Munster Express for 5 June 1936 (p.3) notes: “This year a large number of organised parties from the United States are to visit Ireland. Among the firms who are organising parties are the American travel Exchange, Frank O’Brien Travel Bureau, Maher Travel Bureau, P.J. Grimes Tourist Agency, McGovern, Synnott and Kiely Travel Bureau, and Peter Donoghue Travel Bureau. From advices received it is learned that as many as 15 parties are being organised to travel by the popular liners of the North German Llyol Co., which are regular callers at the ports of Cobh and Galway. In addition several parties are travelling on the Cunard White Star Service.”

During this period of building tourism mass, Gougane Barra was going through its own transformations. In the 1920s and 1930s, it went through another phase of clean-up of overgrowth and got a new hotel. Again the William Lawrence collection as well as the press at the time echo these changes. For example, a journalist with the Southern Star on 19 September 1925, remarking on the protection of Irish pilgrimage sites in the 1920s, notes (p.6): “Unfortunately in Ireland, however, much we may venerate our shrines, we seldom expend much trouble in their upkeep. A broken wall, rank grass, weeds seem not to matter, and even the necessary repairs to buildings are neglected so that all combine to add to a general appearance of decay. Our places of pilgrimage, therefore, compare ill with those of continental countries, where every care is taken to preserve and embellish them. Gougane Barra, though far more complete than other Irish shrines, cannot be said to have escaped from the usual neglect of our holy places…large forest trees are growing through the walls of St. Finbarr’s Hermitage; should these be uprooted by a storm, part of the ancient structure would be destroyed. The Stations of the Cross are badly damaged; many of the figures are broken and also are their handsome frames; around the cross are other missing elements. As for the little Hiberno-Romanesque chapel that gives to Gougane Barra so much of its character, it badly needs the hand of the craftsman”.

A report in the Southern Star on 24 April 1937 (p.6) reveals the increasing trade requirements of Cronin’s Hotel due to increasing tourism numbers. Cornelius Cronin, the hotel proprietor, appeared before Macroom Court applying for a new licence to trade in intoxicating liquors in the hotel premises erected by him at Gougane Barra. Judge T. Donnell, presiding, considered Gougane Barra to be a “stronghold of everything Gaelic”. The hotel was designed by Cornelius and built by direct labour under his supervision.  It was noted that the traffic in the locality was increasing. There was fishing and shooting to be had there to attract visitors. Cornelius in evidence stated that he was a son of the late James Cronin. By a family arrangement in 1935, Cornelius got a portion of the holding owned by his late father. On that portion the applicant built the hotel of fourteen rooms at a cost of £2,000. On the old holding there was a hotel already and it had been there for over forty years [c.1897].

The new hotel premises were built two hundred yards away.  The applicant’s brother Denis Cronin occupied the old hotel. It had come into his possession two months previous to the case. The accommodation there was not sufficient to meet the requirements of the increasing traffic and hence the reason why a new hotel was built. The brothers found they were unable to cater for all the visitors who sought accommodation. Cornelius outlined that they had regular visitors from Dublin and Cork, and visitors had begun to travel from England. Even with the two hotels they found that at times they had not enough accommodation to meet requirements. There was a course of instruction held there the previous year under the Vocational Education Scheme, which was attended by 60 teachers. Some of them stayed in the old hotel and some in the new, and some stayed in Ballingeary. The fishing and shooting rights were jointly owned by himself and his brother under an agreement. The season for visitors was about four month’s duration. For the remainder of the year, Cornelius argued there “would be very little doing in respect of licensed trade”. The application was granted.

615b. Pilgrims and overgrowth amongst the pilgrimage cells, c.1920 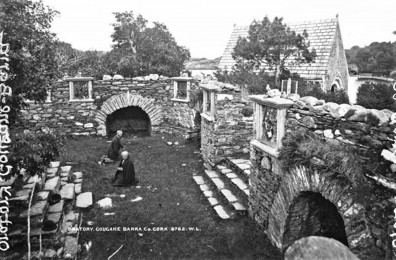