With heritage week, nearly upon us (Saturday 20th-27th August), there are alot of great heritage events on from lectures, walks and the great Heritage Open Day on the second Saturday. For my part, I am experimenting with a couple of events, which I’ll market here over the next three weeks.

The first of my experimented events is a walking tour in association with the North Mon Past pupils of the North Mon, Blackpool and ending in Gurranabraher. Dripping in local history and nostalgia, walking through these areas even without a guide, one is drawn to street names, old laneways, ruined buildings, monuments, churches, remnants of industry to the development of early twentieth century housing schemes.

The walk centres on the North Mon, a school, with deep roots in Cork’s cultural identity. Indeed one is dealing with a long standing culture of hard slog, struggle, hardship, discipline, ambition and determination that has brought the North Mon to this point in its life. It is perhaps from those traits that the themes along this walk stem. The walk addresses places that were prominent in the nineteenth century and which sought to give a sense of humanity and a sense of social justice to people who struggled in difficult times.  Certainly the themes that run through places such a Blackpool with its myriad of industries two hundred years make it an enormous place of experiment and an important cog wheel in the history of the city. The variety of buildings addressed on the walk if anything reveal how this part of the city is a place of remaking,  re-assembling, re-building in a physical material way and socially.

One of my stops talks about Fair Hill and its purpose in bringing the bones of 90,000 cattle into the City’s Cattle Market  to be butchered for export purposes between August and December.  Indeed standing on Fair Hill and looking down on the impressive view of the city from areas such as the Fair Green beyond Farranree one cannot only imagine the farmer’s view of the city two hundred years and the trafficking of their animals like a conveyor belt. Their slaughter offered employment but not to everyone. The subsequent export of the meat to areas such as Barbados, Carolina, Georgia, Jamaica and Newfoundland and Britain perhaps connected Fair Hill in the production chain to far flung places of the known world.

Without any enlargement of the housing capacity in Cork’s inner city, the poor were further concentrated in the former medieval area of North and South Main Street, around Barrack Street in the southern suburbs, and Shandon Street in the northern suburbs. Many of the impoverished homes were located in narrow and very unclean lanes. The habitations varied from cabins to cellars, all in a poor rundown state.  To counter the ever-growing filth of the small habitations, municipal relief committees were set up. In addition, finance was given to purchase fresh straw and to replace the old and infected material used by the poor. In addition the appointment of Dr. Francis Moylan to the See of Cork in 1786 marked the beginning of invitations to several religious orders to the city, namely the Presentation Brothers and the Sisters of Charity.

The walk takes its routeway from the North Mon into Blackpool exploring some of its industrial past. Blackpool was the scene of Industry in Cork in the eighteenth and nineteenth centuries for industries such as tanning through big names such as Dunn’s Tanney and distilling through families as the Hewitts. The leather industry at one vibrant in Blackpool with no fewer than 46 tanyards at work there in 1837 giving employment to over 700 hands and tanning on average 110,000 hides annually. Blackpool also has other messages about relief in the form of the former Poor House site at Murphy’s Brewery to Madden’s Buildings to highlighting the work of Ireland’s social reformers through street names such as William O’Brien, Gerald Griffin, Daniel O’Connell and Tomas McCurtain. All these messages inject the place with memories of difficult times but times of determination to survive against the odds.

In the 1880s, 22,000 people lived in 732 tenement houses, ¼ of the city’s population needed re-housing. By the late 1920s, Just north of the market place for the very cattle which provided the foundations of Cork’s economic growth were located c.500 tenement houses. With four main routeways running west- east, Harding’s Lane, Corbett’s lane, Trimbath Lane, Skeyes lane with a further north south lane named Kearney’s lane, these provided a frame of sorts for just over 15 lanes for over 300 families by 1930. In October 1930, City Manager Philip Monahan brought before the city’s councillors a proposed housing scheme for north-west ward. The initial plan was to demolish 152 houses across 4 acres to be demolished. This figure after discussion came to demolishing over 500 houses across 20 acres. A further 11 ½  acres were to be acquired on the green fields of  Griffins’ Fields, where initially 208 houses were to be built. The tour explores these latter elements as well.

The first walking tour is booked out through facebook but the second tour runs at 7pm, Thursday, 25th August from the gates of North Mon school.  It’s free and all are welcome as well as people’s own memories. 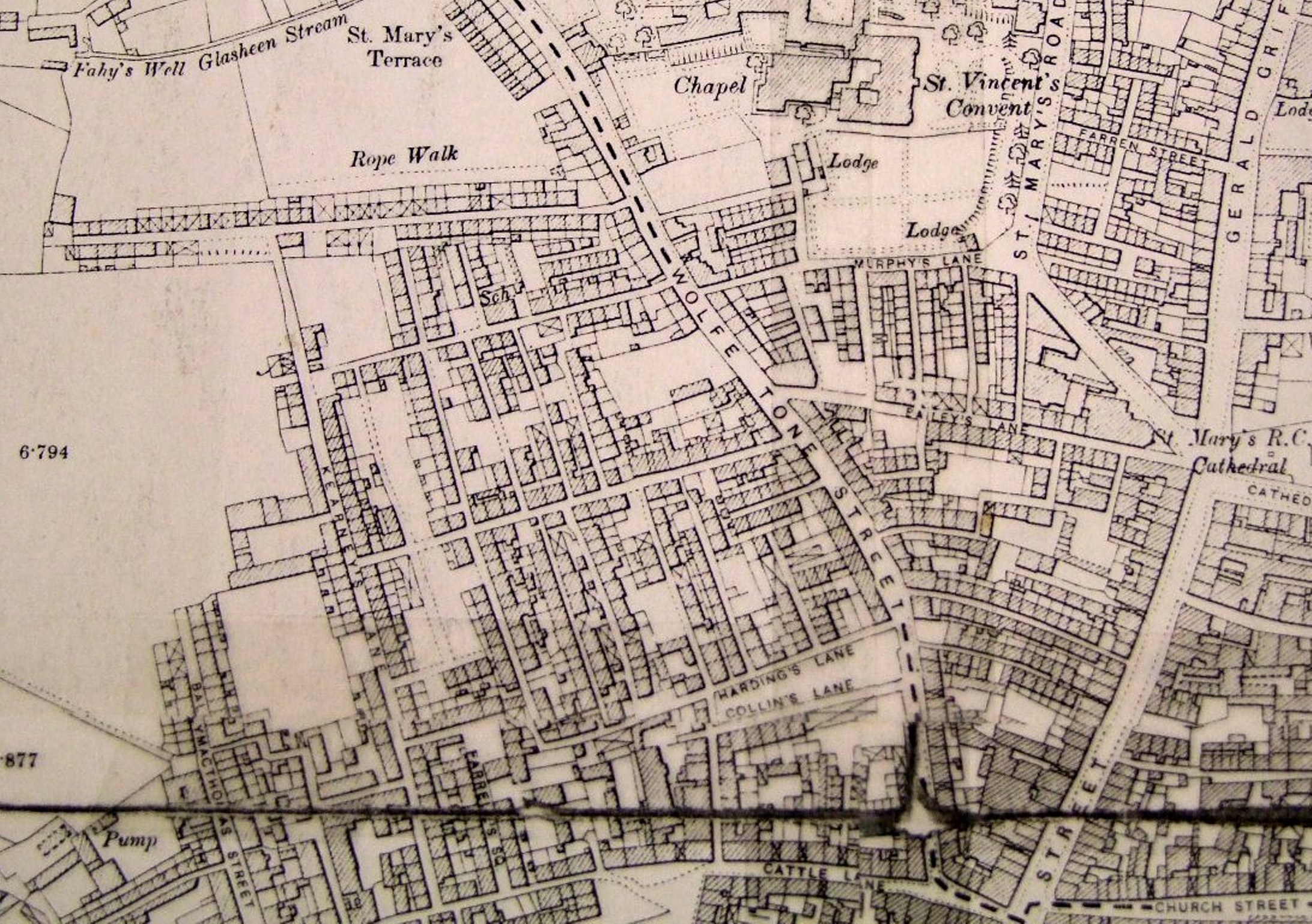