Stories from 1918: The Conciliations of Fr Dowling

One hundred years ago this week, on 21 June 1918, the Freedom of the City was awarded by the Corporation of Cork on Capuchin Fr Thomas Dowling. He was honoured for his invaluable services resolving industrial disputes in the city.  Fr Dowling’s obituary in the Cork Examiner on 9 January 1951 highlights that he was a native of Kilkenny, where he was born in 1874. He entered the Capuchin Order in his native city at the age of sixteen and was ordained in the Capuchin Church in Kilkenny in December 1896. He arrived shortly afterwards to Holy Trinity Church in Cork.

During the early years of his ministry, Fr Thomas was called on to fill some of the principal offices in the Order He was appointed Guardian of the Friaries of Cork and Dublin, elected a Definitor of the Province in 1907 and Provincial from 1910 to 1913. He was for many years an active member of the missionary staff and earned the reputation of being a pulpit orator of merit.

In his early years in Cork Fr Thomas directed with zeal and energy the Total Abstinence Society attached to the Holy Trinity Church.  He hosted 300 members of the Total Abstinence Society attached to the Church. Recreational events took place in a nearby building.  On 30 January 1907, the present Fr Mathew Hall was opened in what was then Queen Street. Fr Dowling led the work to create a good auditorium for plays and concerts and plenty of rooms for activities such as a billiard room, a card room, a reading room. For a time attempts were made to run pictures – it was called a Picturedrome. The Christmas Pantomines became popular – the cast being hall members and monies that were made defrayed expenditure. At different times, members organised dramatic societies, bands, orchestras and choral groups. Classes were held in cookery, sewing and needlework, gymnastics and first aid. Outdoor recreation comprised hurling, football and cycling. Teams were entered in the Cork County Championship and local leagues. The positive relationship with the GAA led to frequent permission to run tournaments in aid of the hall.

During the Great War 1914-1918 the cost of ordinary commodities rose considerably in Cork City. As a result, the interplay between rising costs and wages began to affect the economy. Wages could not match prices so strikes were called. Fr Thomas, who had studied social reform, threw himself wholeheartedly into the work of mediation and arbitration in 1918 between employers and trade unions. In late February 1919, he even succeeded in establishing a Cork Conciliation Board and was its first president. It consisted of four delegates from the Employers’ Federation and four appointed by the Cork and District Trade and Labour Council. The office of the board aspired to “endeavour to amicably adjust any dispute that threatens to result in strike or lock-out with a view to preventing same”. Both the Trade and Labour Council and the Employers’ Federation approved the principle that, “no stoppage of work, strike, or lock-out shall take place without the matter in dispute having been first referred to and dealt with by the Conciliation Board”.

Operative bakers, Tramway workers and Cork Gas workers were negotiated with in the first eight months of the board. In early September 1919, the strike of the Cork Gas Works, which entailed considerable loss and serious inconvenience to the public, was suspended by mutual agreement between the directors of the company and their workers. This was in order that the matters in dispute should be referred to Board. The Board met over two days at the Commercial Buildings, South Mall under the Chairmanship of Father Thomas. Representatives of the workers and the directors appeared before the Board and stated their case. The proceedings lasted several hours at each sitting, and at the conclusion Father Thomas announced to both sides that a unanimous recommendation was arrived at by the Board which he appealed to both sides to-accept.

Fr Thomas clocked up notable accolades. The Freedom of Cork City was conferred upon him in June 1918. The Senate of the National University of Ireland paid tribute in 1920 by conferring on him the honorary degree of LL.D. A physical recognition for his general services for the Cork Trade Unions exists in a stained-glass window, to his memory in Holy Trinity Church. It was unveiled on 4 May 1919 and was the design of the famous stained-glass artist Harry Clarke but it was made by his father Joshua.

At the luncheon of Dublin Rotary Club, of 6 November 1922, Fr Thomas as guest speaker, criticised the general tendency to lay emphasis on the rights of employers and the duties of workers, which, as he aptly put it, led people to forget that employers had rights as well as duties; “The fundamental law of the social state should be equality of essential rights and equality of essential duties…It was a fundamental religious principle that human labour should not be treated as an article of merchandise, the value of which is to be measured merely by the fluctuating of supply and demand”.

In early 1923, whilst still Guardian of the Cork Friary, Fr Thomas generously offered himself for the service of the Order in the American section of the Irish Capuchin Province. In 1946 Fr Thomas celebrated his golden jubilee in Los Angeles, USA.

Saturday 30 June 2018, The Lough & its Curiosities; explore the local history from the Legend of the Lough to suburban development; meet at green area at northern end of The Lough, entrance of Lough Road to The Lough; 12noon (free, duration: two hours, on site tour) 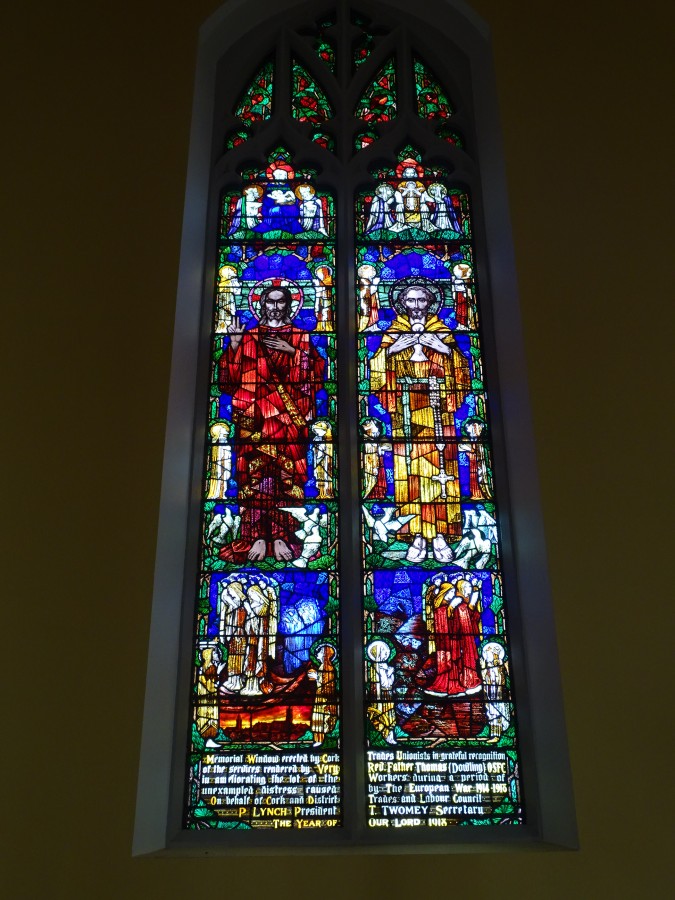