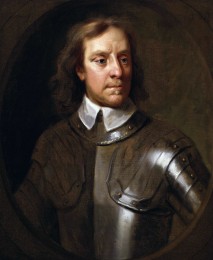 On 30 January 1649, the parliament in England arranged the beheading of Charles I and plans were made to restore the throne to parliament itself through the proclamation of a new king, Charles II (continued from last week). To suppress any royalist support in Ireland, a new army was established under the leadership of the new Lord Lieutenant in Ireland, Oliver Cromwell. Cromwell landed in Drogheda on 15 August 1649 and swiftly took the town for the new parliament. The town’s defenders did not surrender and the town was besieged accordingly. Stories relate that three thousand combatants lay dead on the streets of Drogheda, following Cromwell’s attack.
Cromwell proceeded to Ross and sent out small contingents into the Munster countryside to take note of royalist military activities. Cromwell’s next major town for taking was that of Wexford which comprised a large amount of Royalist Protestant inhabitants. Soon after Waterford, Duncannon, Clonmel, Limerick, Galway and Kilkenny fell. The New Model Army met its only serious opposition at the Siege of Clonmel, where its attacks on the town walls were repelled at a cost of up to 2,000 men. The town nevertheless eventually surrendered.

In Cork, the principal plotter and commander of Cromwell’s forces in Munster was Richard Townsend (later landowner of the Castletownsend region in West Cork). On the night of 16 October 1649, Townsend put plans into operation to take Elizabeth Fort off Barrack Street in Cork for Parliament. The choice of this night was due to the fact that the Royalist captain, Muschamp was away and the fort with its thirty-five men on duty that night was easily secured for parliament. Soldiers are also recorded as marching on the main guard at North Gate Drawbridge and forcing their way into the town. Seven days after the takeover of the walled town, a letter was sent to Cromwell informing him of the position. Shortly after, the anti-parliament Protestant army in Munster surrendered and an agreement was drawn up, which was signed by each member of the army itself submitting themselves to the parliament in England and the Lord Lieutenant, Cromwell.

In the case of events that happened in Cork City in 1639, two urban folklore stories are prominent in the old antiquarian books. Tuckey’s Cork Rembrancer (1837) records that on the night of 16 October 1649 the taking of the town came as a surprise to the governor, Sir Robert Starling who did envisage losing his authority in the walled town of Cork. A second story told is recounted in the Journal of the Cork Historical and Archaeological Society in 1905 by Mr Moore. It that tells of the escape of the wife of an officer named Lady Fanshawe from Red Abbey, the site of an old Augustinian Abbey, the tower of which still stands off Douglas Street. Her husband had previously been in the service of Charles I and she is said to have detailed an account to her son. A few days after her escape to Kinsale, her husband was given orders from the self-appointed new King in England, the son of Charles I, Charles II to go to Spain. To get to the continent, they had to travel to Galway in order to take a ship. It is detailed that they sailed from Galway in early February in a ship named Amsterdam bound for Malaga, Spain at which they are said to have arrived at in early March.

In the case of the Royalist supporters inhabiting the walled town, suburbs and liberties of Cork apart from signing an agreement to succumb to Cromwell, a further agreement was offered to them if they aided Cromwell in his military attacks on other Royalist garrisons throughout Munster. Throughout Cork County, there are many other stories relating to Cromwell and the devastation and his model army. The majority involve arson or the burning down of minor and major castles owned by Irish Lords or Royalists and Catholic Abbeys.

By December 1649, Cromwell had seized control most of both the eastern and southern coasts from Belfast to Cork except for garrisons at Duncannon and Waterford City itself. The harshness of the ensuing winter weather forced Cromwell to fall back to Youghal and set up his headquarters there for the remainder of the winter period. Both Waterford and Duncannon were eventually taken but after Cromwell had departed Ireland in 1650. Urban folklore abounds about how Cromwell spent Christmas in 1649. One story relates that by mid December, Cromwell visited the walled town of Cork and is reputed to have spent Christmas in the company of a Mr Coppinger who occupied a house on South Main Street. Contradicting this evidence is another story, which relates that Cromwell spent his Christmas in the Ballyvolane area, in a house now known as Ellis House or The College. Whether or which, Cromwell is said have used the immediate area of the walled town as a headquarters in order to visit nearby garrisons at Kinsale and Bandon, both walled towns. He is also said to have ordered the rebuilding of Elizabeth Fort, which was damaged when it was taken in the previous October for Parliament by Cromwellian soldiers. 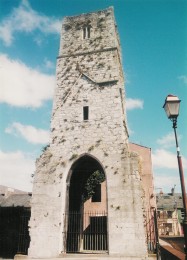