Henry VII’s charter of 1500 to Cork recognised the potential of the harbour and the idea of possessing it as a territory. However by this year, the old Anglo-Norman feudal manors were collapsing, and even the great Earl of Desmond territory that replaced them was dissipating. The English interest in Munster was much weakened by the Wars of the Roses in England – and Irish clans took back many English castles and territories in Cork and Kerry. The fifteenth century brought civil unrest and geographical and cultural change as new owners emerged over the land holdings of County Cork.

The Anglo-Norman conquest of Ireland diminished the ancient Gaelic kingdom of Desmond in size to the present County Cork and south County Kerry, the MacCarthys being compelled into the southwest of Munster where they ruled as MacCarthy Mór. Desmond (Des-Mumha) had encompassed southern Munster and included within its boundaries the greater part of present-day counties Limerick, Kerry, Cork and Waterford.

The rise of the English Earls of Desmond had their origins in 1169AD when Maurice FitzGerald from Wales came to Ireland with the Anglo-Normans. Many scholars have written about the family history of the Fitzgeralds. Burke’s Genealogical and Heraldic History of the Landed Gentry in Britain and Ireland, published in the early nineteenth century, reveals that over eight centuries the Fitzgerald family became one of the most powerful with numerous branches in Ireland. The Fitzgeralds were initially located in Counties Kerry and Kildare. A walk through Tralee town centre and glancing at its historical plaques reveal that a castle was built at Tralee circa 1243 by John FitzThomas FitzGerald. It became the centre of Geraldine power (the House of FitzGerald) in Munster for over 400 years. John’s great grandson son, Maurice FitzThomas or FitzGerald (d.1356), inherited vast estates in Munster and was created 1st Earl of Desmond (South Munster) on 22 August 1329 by King Edward III. Maurice was Captain of Desmond Castle in Kinsale (an earlier structure to what is there now), so-called ruler of Munster, and for a short time Lord Justice of Ireland. He led a rebellion against the Crown, and was suspected of aspiring to make himself King of Ireland, but he was ultimately restored to favour.

In time, the Fitzgerald family began to amass vast tracts of land in Kerry, North Cork, Limerick, Waterford and Tipperary. In particular, they became very powerful and claimed ascendancy over native Irish lordships such as MacCarthy Mór. Between the years 1329 and 1601, sixteen Fitzgeralds held the title ‘Earl of Desmond’. They were estimated to have owned one million acres of land. One of the nearest territories to the walled town of Cork was within the Cork Harbour region. On 12 June 1438, Robert FitzGeoffrey Cogan granted all his lands in Ireland (being half the old Kingdom of Cork) to James, Earl of Desmond. The heart of these lands was in the western section of Cork Harbour taking in the Carrigaline and Douglas region and westwards to Castlemore in Ovens and beyond.

Jarring against the Geraldine narrative of expansion, the MacCarthy Mórs, the ancient Kings of Desmond, also held extensive demesne lands scattered throughout the counties of Cork and Kerry. Burke’s Genealogical and Heraldic History details that their principal seats in Kerry were at Pallis Castle, near present-day Killarney, Castle Lough, on the shore of Killarney’s Lough Leane, and Ballycarbery Castle, near present-day Caherciveen.

As well as the royal sept of MacCarthy Mór (nominal head of all the MacCarthys, and who dominated in south Kerry), there were three other related but distinct branches. MacCarthy Reagh or Riabhach (‘grey’) was based in the Barony of Carbery in southwest Cork; their principal seats were at Kilbrittain Castle, as well as Timoleague Castle. The Duhallow (MacDonough) MacCarthys controlled northwest Cork. Their principal seat was at Kanturk. MacCarthy Muskerry was on the Cork/Kerry border. Over the years of the MacCarthy Mór rule in Desmond, there were a number of sub-septs created for non-successional sons of the King. All these families, slowly but surely, encroached on English lands and secured them for themselves.

Dermod Mór MacCarthy, a son of Cormac MacCarthy Mór, of the main line was born in the year 1310. In 1353 he was acknowledged and created the first Lord of Muskerry by the English administration. The lands passed down to the ninth Lord of Muskerry, Cormac McTeige MacCarthy Láidir, who succeeded in 1449. He was a great builder and financed the construction of the third (and present day) Blarney Castle, Carrignamuck in Dripsey and Kilcrea in Ovens. All are significant structures in their own way. These tower houses all marked access routes across undulating topography and in areas of tributary rivers. It was also the custom for the Lords of English lands to place some relative in each of their castles. Cormac Láidir’s own brother Eoghan, the chosen relative, was stationed at Carrignamuck. Being only just kilometres from the walled town of Cork, the MacCarthys had a significant role to play in playing political power games in the region, and knowing the potential of taxing goods travelling through their lands bound for export and offering security for the English administration.

782a. Map adapted from W F Butler, 1920, Pedigree and Succession of the House of MacCarthy Mór, With a Map, Journal of the Royal Society of Antiquaries of Ireland, vol. 51, p.33; it shows the extent of McCarthy lands taken from Anglo Norman families such as the DeCogans and the Barretts.

782b. Ramparts of Blarney Castle, present day and the kissing of the stone (picture: Kieran McCarthy). 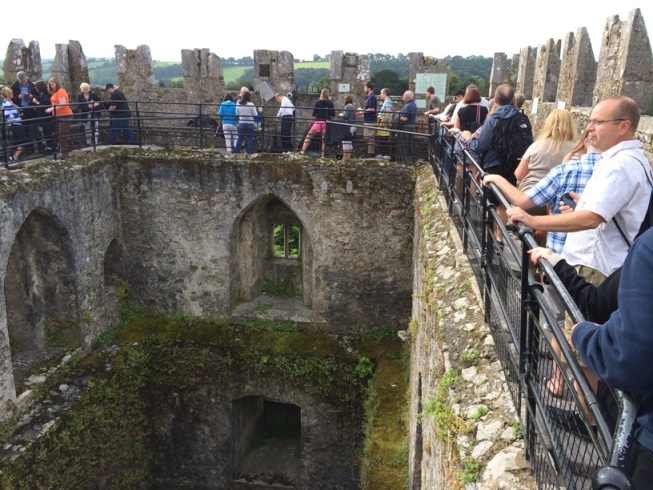