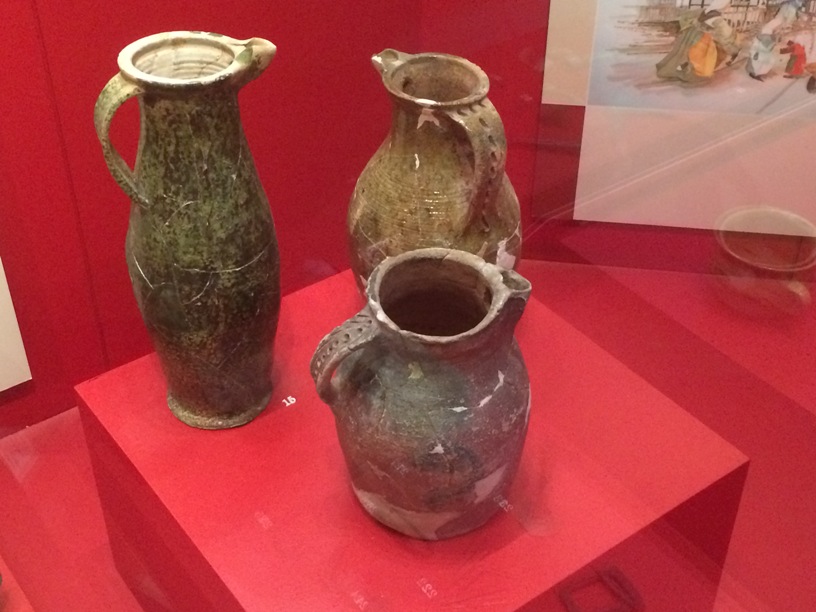 – A Taste of France in Medieval Cork

To transform people and place, the Anglo Normans used several methodologies like walled towns, market towns like those listed in last week’s column, and castles and feudal law to secure the wider physical and cultural landscape. One of Cork’s imports in the fourteenth century also embodied change and connections to a wider empire and the diffusion of new cultural products. Cork’s large wine trade was part of mass consumer culture and this is reflected in the substantial amount of French pottery turning up on medieval archaeological sites in the city. The main French ports imported from included Gascony, Bayonne and Bordeaux. Most wine was imported to serve the needs of the English colonial outpost.

An important step in the history of creating the Bordeaux wine region took place in 1152, when the heir to the Duchy of Aquitaine, known as Eleanor of Aquitaine, married the future king of England, Henry Plantagenet. Plantagenet would later become known as King Henry II. By the late fourteenth century, Bordeaux had become a large city. In fact it was so big, after London, it was the second most populous city under control of the English Monarchy. The Bordeaux wine trade began exporting to England in 1302 from St Emilion to serve the taste of King Edward 1. Circa 1305-1306, up to 100,000 tuns of wine were exported annually from Bordeaux to Britain for mass consumption.

Much work has been written on the history of the wine trade in Europe. I draw here on some of the work of Susan Rose (2011, The Wine Trade in Medieval Europe, 1,000-1500AD). Saintonge was a former province of south western France, covering most of the present département of Charente-Maritime. Its chief city was Saintes. Saintonge was originally the territory inhabited by the Santones, a Gallic tribe. The principle pottery sites were rural workshops in the parishes neighbouring La Chapelle-des-Pots, on the wooded, limestone plateau north east of Saintes and some 50 kilometres down the river Charente from the maritime port of La Rochelle. Hence in each form of Saintonge pottery, the fabric is the same – a fine white to cream micaceous earthenware.

Thousands of sherds of Saintonge Pottery have been discovered through excavation beneath Cork’s former medieval core. It occupies almost 65 to 70 per cent of the medieval assemblage. Pottery scholar and expert Clare McCutcheon has done amazing work in recognising the extent of Cork’s connections in trade through pottery analysis. The pottery also has been very useful in dating archaeological deposits in which it was found. Large sites Christ Church and what is now Bishop Lucey Park, in the 1970s, Dunne Stores and carpark site at North Gate Bridge excavated in the early 1990s, Grand Parade City Carpark in the early 2000s and smaller miscellaneous excavations from the 1980s to the 2000 have all revealed thousands of sherds of broken Saintonge pottery.

The images in the published excavation books show tall, distinctive, and colourful jugs. Five types are revealed – mottled green, glazed and unglazed, polychrome, all over green, and sgraffito. One cannot be not impressed by the decoration – the glaze and design and the display of French identity and the skill of its maker. Clare McCuthcheon in a Miscellaneous excavation book on Cork City (1984-2000) points to the skill of knife trimming its spout; its pouring holes are quite small, created by fingers pushing out the clay. Perhaps on some of the sherds fingerprints still linger. In fact such is the extent of this broken pottery beneath the old medieval core, it could be argued that it was embraced in many of the fourteenth century medieval homes within Cork’s walled town.

A tall, large in volume, glazed and mottled green Saintonge jug is on display in the cabinet of medieval objects in Cork Museum – it’s state as an object of nostalgia, is something to revere, its material form is further highlighted by the glued together cracks running through it. Found in twentieth century Cork – broken, functionless, and a wrecked shadow of its former self. Truth been told and in reality, there were hundreds of these jugs in Medieval Cork. This museum object stands empty – empty of its memories – indeed the glued back together element of the jug further highlights attempts to bring its story back to life. I’m not too sure if the jug could be filled to the top – its handle doesn’t look strong enough for someone to pour from a full jug, but certainly the idea of this French object sitting on a wooden table in a timber or stone dwelling within Cork’s walled town is intriguing.

Saintonge jugs like this helped in the transformation process and in the vision of English cultural takeover. In one sense these jugs were metaphors for change, products of a new nation being constructed spanning Britain, Ireland and parts of France. One can just imagine such pottery arriving into Cork for the first time – the citizens looking at these designed objects, which were meant to have a functional meaning and to fulfil the everyday needs of the town’s citizens. Looking at them en masse though, these jugs connected places like Cork to the potters of Saintonge, the science of making mass pottery, the mass consumerism of purchasing such pottery, their mass diffusion and colony building.