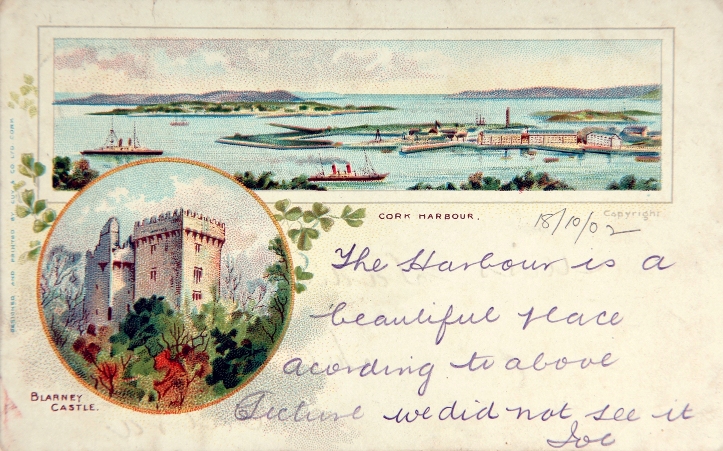 To begin a series on the histories and the cultural DNA of Cork Harbour, the question is where to start. There is so much in the region to write about, much of which will appear in this column over the next couple of months. The second largest natural harbour in the world is a very special place to explore. At this point in time, the celebration of the bicentenary of the foundation stone of the Cork Harbour Commissioners building on Custom House Quay is a significant milestone. The current and ongoing conversations about a new diaspora centre for Cork are key talking points which tourist bodies in the city are attempting to flesh out. Themes such as maritime Cork, migrations, emigration, trade, and historical defensive structures are all coming to the fore of heritage conversations in the region.

The sixty or so cruise liners that come to Cobh every year hark back to an age where passenger ships were regular visitors to the harbour and to an age of coming, going and disappearing for visitors and emigrants. The development of Spike Island by Fáilte Ireland and Cork County Council, and Camden Fort Meagher being developed by an energetic community volunteers, shows the move more and more to celebrate the harbour’s memories and to mine it for stories that may help the region’s future economy and cultural progress. However, there is a sense that both latter topics – industry and culture – jar or clash against each other in this coastal space. For example I always think that the mid twentieth century industrial monuments such as Whitegate Oil Refinery seem to clash with structures like Martello towers and star shaped forts. But perhaps all are monuments of their age but with different functions, stories and aesthetic issues.

The sense of jarring also exists with the telling, remembering and forgetting of stories in the harbour. There are pockets right around it where in some cases there are no history information panels on display, especially at sites where you might expect one. For example at Roches Point, the ultimate coastal monument (built in 1835) dominates a cliff edge as if it is saying hello and goodbye to the harbour’s visitors, but sadly offers no information panels to read. However, if anything the disparate pockets of lack of information points to how as a region we do need to create awareness of what cultural nuggets we have on our doorstep. We should up our awareness of such nuggets and respect how they do add to our quality of life and that we do need mind them for future generations to inherit.

Looking at a basic Ordnance Survey map of the Cork region, the city’s lined delineation make it sit in the harbour’s north west corner. In an abstract way the city looks like it is putting weight on the harbor pushing it into the Irish sea – in a way enhancing the harbour’s edges and its multiple coastal histories. On a good sunny day you can see the water tower for Cobh from the top of the tower of St Anne’s Church Shandon and the rolling and beautiful fieldscapes which seem to fall and interlock like a river of different shaded greens into the Lee’s estuary. It possesses very beautiful scenery, which many painters have had fun engaging with and romanticising about. One of interest is Cork-born and amateur landscape artist Henry Morgan. In 1849 he published a series of 28 colourful lithographs of the harbour. Cork City Libraries holds a copy of these and have recently posted them on their corkpastandpresent.ie website. You can almost see the painter rooted in the landscape windswept by south easterly winds and perhaps encouraging him to hurry his creation.

On any good weather day, there are parts of the region where one can almost drive across its sun kissed mudflats. From the Cork-Midleton dual carriage way you get to appreciate farmer’s attempts of reclamation through the ages and the broad mudflats which serve as a home for international bird habitats. There are sections of the harbour to be viewed from the road, which seem almost forgotten. I’m a big fan of the Smith Barry tower house folly, which belonged to Fota House estate and which exists on the edge of the Fota golf course.

In the early nineteenth century Smith-Barry had the tower designed by Cork architect John Hargrave. It was built in a Tudor Gothic Revival style and its footprint can be seen from different locations surrounding it. It was used by the Smith-Barry family as a hunting lodge. During the last part of the twentieth century the estate fell into disrepair. Fota House was restored but the folly was left to fall into ruin. The tower is a homage to an interest in ancient history and stands tall as if reaching into its skyline leaving its overall stone blocked vision hanging poetically in the air. I like the idea of seeing the harbour as a kind of cul-de-sac, where multi-layered memories gel into the contoured landscape, creating a type of cultural glue. Indeed, the more you dig into it in a sense the more it gets under your skin making you want to explore the harbour more.

770a. Postcard of Cork Harbour, 1902, definitely a landscape to explore and see! (source: Cork Harbour Through Time, 2014 & Cork City Museum)