Can I thank the CE, the Finance Officer John Hallahan and Cllr Martin, the chair of the Finance Committee for their work on this draft annual budget book.

History is being made this evening as this marks the first budget of the extended city in its current size. We now have to budget for 210,000 people and a city five times more in size with more challenges and more calls for funding.

Reading through the various sections you can see the strengths of our directorates and the ongoing work programmes – the 28 per cent of our income spent on Housing with over 1,000 social housing constructs coming on stream in the next two years – and near 20 per cent on roads with several construction and public realms projects ongoing. The continued investment in community grants, sports grants and arts grants are all very welcome.

I welcome as well the reference in the document of strong financial management and budgetary control and in particular the pulling back of the revenue deficit.

I am happy to support the budget.

I do have a few concerns from reading the document;

Firstly, the increase in expenditure of e.5.8m in homelessness services will help those that need it but I do hope that the increase will actually provide better services to those who need support services to get out of the homelessness trap, and that the funding doesn’t completely disappear into emergency accommodation, with no long term strategy really emerging.

Secondly, from a business perspective, I have an issue that that 43 per cent of the Council’s income is from rates- I feel that’s not sustainable in the long term – But I do welcome the Economic Development Fund and all its moving parts plus the work of the Local Enterprise Office and the cultural festival scheme in Cork– I still think there is a job of work to really promote measures more in the Fund, the enterprise office and the cultural festivals to the general public – all provide very useful tools to help businesses to respond to commercial changes.

Thirdly, I would like to comment on the ongoing issue of the unresolved compensation package to the County Council. It is not positive that it has not been resolved before this evening – and I do think there needs to an appendix in this draft annual budget saying how the compensation figure of e.13.5m was reached plus a little about previous expenditure in our new areas– I would suggest it might go on pages 12 and 13 with its graph showing the expenditure increase showing a breakdown of figures. I say this in light of the County Council narrative as well earlier this week regarding the County suggesting it is losing significant income through the city boundary extension and no reference in their press releases to the compensation package.

Fourthly, it is welcome to see where sections of the LPT will go towards – I do note with unease though in the introduction the allocation of e.176,500 towards “tree cutting”  – I would like to see that for every tree cut we plant two – and that for the most part the tree budget is going towards planting trees – that is this document the words “tree cutting” would be replaced by the words “tree management and tree planting”.

That leads me quickly to my fifth and last point – which is the understating of the narrative around the Council’s investment in environmental and climate change adaptation work plus even in the sustainable development goals –I think all these aspects should come to the fore more and get their own primary paragraphs in the introduction.

–for example, in the introduction there is a huge section on parking regulation but very little on the campaign to get more park and rides, cycling initiatives plus more bus incentives – in terms of transport in this budget document one could argue there is a significant car focussed narrative.

We need to create a more modern urban agenda narrative as much as we can.

I wish to thank John Hallihan and all in the finance department again on this work and I look forward to seeing the implementation of the work programme for 2020.

Many thanks Lord Mayor. 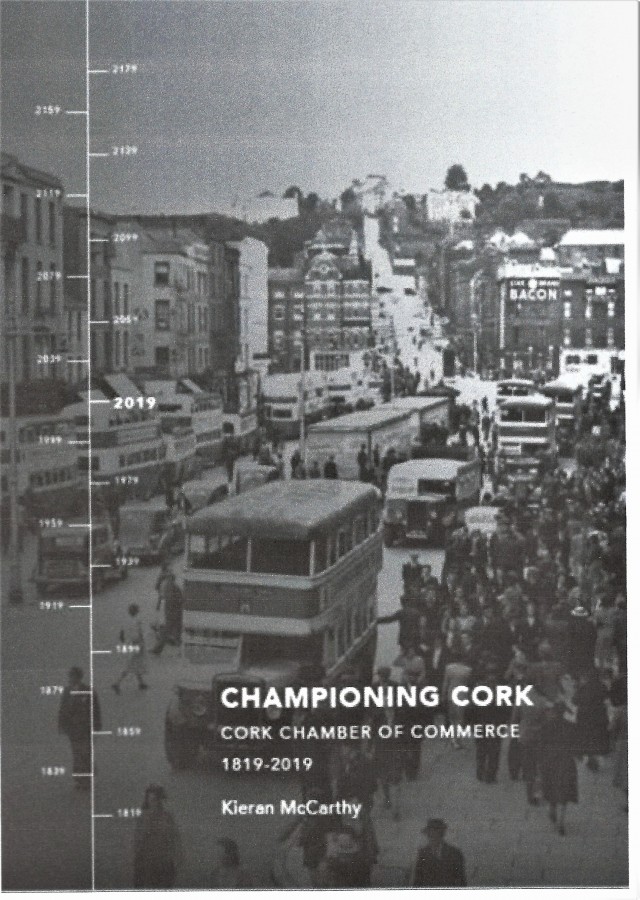 Championing Cork, Cork Chamber of Commerce, 1819-2019 is my new book and has been funded and published by the Chamber of Commerce. Established in 1819 the Chamber has consistently led a mission to be the leading business organisation in the Cork region. For two hundred years, it has committed itself to ensure the city and region’s prosperity, vibrancy and competitiveness through sustainable development. Researching the history of the institution through the rich archival material that has survived, every broad period of growth and decline has empowered the institution to carry on to challenge and resolve the issues of the day. The contribution has been immense.

Circa 1819, the Committee of Directors of the Cork Commercial Buildings Company made a rule banning campaigning on political or religious matters and possibly Catholic Emancipation. This displeased many of the subscribers who left and formed the Cork Chamber of Commerce. On 8 November 1819 a meeting of subscribers of the new chamber met at Mr Shinkwin’s Rooms (later the site of the Victoria Hotel on St Patrick’s Street) to discuss the rules of governance, to be based on “liberal principles”. The meeting was chaired by Mr Murphy while Mr Alex McCarthy presided at the inaugural General Meeting of 13 November.

Established in an economic decline and as a champion of Catholic Emancipation, the Chamber emerged not only to provide a physical space where its members could come and read the up todate news of the day and plan for the future, but also to challenge the status quo. It grew rapidly from 1819 to the Great Famine years campaigning for more rights for the Catholic merchant middle class and more investment opportunities.

Post the Irish Great Famine, the economic decline that followed led to the emergence of new forms of party politics being connected with the Chamber. The quest for Home Rule and the Irish National Land League campaign split the membership in the 1880s with the Incorporated Chamber of Commerce and Shipping appearing on the commercial landscape of the city. The city now had two chambers that pursued issues such as the need for better and quicker transport modes and more business education. Both of these core issues led the Chambers to the era of the First World War, where once again economic decline ensued. There was a distinct shortage of labour as many Irish labourers went out to fight the war. Following this the Irish War of Independence and the Irish Civil war disrupted business. It was only in the late 1920s that the two Chambers reframed their strategies to push the future of the Irish Free State. Growth for over a decade through industries such as Fords and Dunlops and reclamation projects such as Tivoli industrial area were again stifled by the advent of war – this time the Second World War.

Cork in the decades of the 1950s and 1960s was a regional powerhouse in Ireland as Haulbowline Steel Mills, ESB projects such as the Lee Hydroelectric Scheme and Marina Steam plant came into being followed in quick succession by Verolme Dockyard, Whitegate Oil Refinery, Cork Airport, and a new Regional Technical College. The decade of the 1980s brought economic decline again and the Chamber once again shifted its focus on strengthening the supports for local business into the late twentieth and early twenty-first century. The creation of a full time Chamber executive team with creative thinking capacities provided platforms to think about the future of Cork as Ireland’s southern capital and region.

This book draws on the Chamber’s archives in Cork City and County Archives and from its press coverage over two hundred years. It highlights the big stories of the chamber’s past but also the subtler elements – the conversations, speeches, the messages, the creativity, the elements of empowerment – the intangible pulses, which drive an institution forward. The book presents six chronological chapters, whose headings are meant to connect with the present-day strategic aims of the Cork Chamber. The chapters help showcase how much lobbying work the Chamber has covered, the topics that have come up over and over again, and the ones, which form the foundation of the ongoing elements of the Chamber’s forward-looking vision.

Chapters two to seven map out the variety of campaigns across three centuries – from the early nineteenth century to the 21st century. Chapter two, entitled Setting the Scene, outlines the context to the establishment of the organisation and the first sixty years. Chapter three entitled Transforming Cork relates a multitude of campaigns to transform Cork physically especially its infrastructure. Chapter four entitled A Vision of a Region highlights a number of core events, which for the Chamber were a key part in setting out a vision for Cork in the future. Chapter five entitled Empowering You maps out many of the campaigns the Chamber engaged in to enable social change. Chapter six, entitled Supporting Business showcases several of the initiatives to help businesses in Cork City and the wider Region. Chapter Seven, Plans for a New Millennium, details projects completed and ongoing in the early 21st Century City and Region and beyond.