The Data Economy is an important element of the Digital Single Market (DSM). It involves generation, collection, storage, processing, distribution, analysis, elaboration, delivery and exploitation of data enabled by digital technologies. This data enables market players to create applications with a great potential to improve daily life. Cllr McCarthy focussed on the collation of machine read data as opposed to personal data. Local and regional authorities are keys in developing DSM via their roles in providing digital services, which represent the engine of economic growth at local and regional level offering opportunities for innovation and entrepreneurship.

Cllr McCarthy describes; “local and regional authorities have a key role in creating a database of public information on aspects such as transport movement, climate change, energy demand, providing data security, developing necessary digital and entrepreneurial skills, and securing and facilitating funding for broadband networks. I call on the European Commission to support local and regional authorities in their financing activities by continuing to authorise priority deployment of the European Structural and Investment Funds towards digital infrastructure in all European cities and regions including small cities and regions such as Cork and similar size”.

In the opinion, Cllr. McCarthy proposed four lines of action to build a European data economy: Firstly, that a clear and adapted policy and legal framework be adopted for the data economy, removing remaining barriers and risks to the movement of data and addressing legal uncertainties created by new data technologies. Secondly that potential virtual criminality be combated against through effective and coherent preventative cybercrime strategies, which includes training for local and regional authorities. Thirdly that interoperability be improved – to make existing clouds or clouds under development at national, regional and possibly local level interconnectable and interoperable or intertransferable, exploring the potential for standardisation.

Representatives of the European Commission welcomed Cllr McCarthy’s opinion as a clear and important message, that local and regional authorities need and want to play a key role in the sustainable roll-out of the EU’s Digital Agenda and the building of the EU data economy.

The European Committee of the Regions, the EU’s assembly for democratically elected local and regional politicians and public representatives, has a consultative role in EU policymaking. 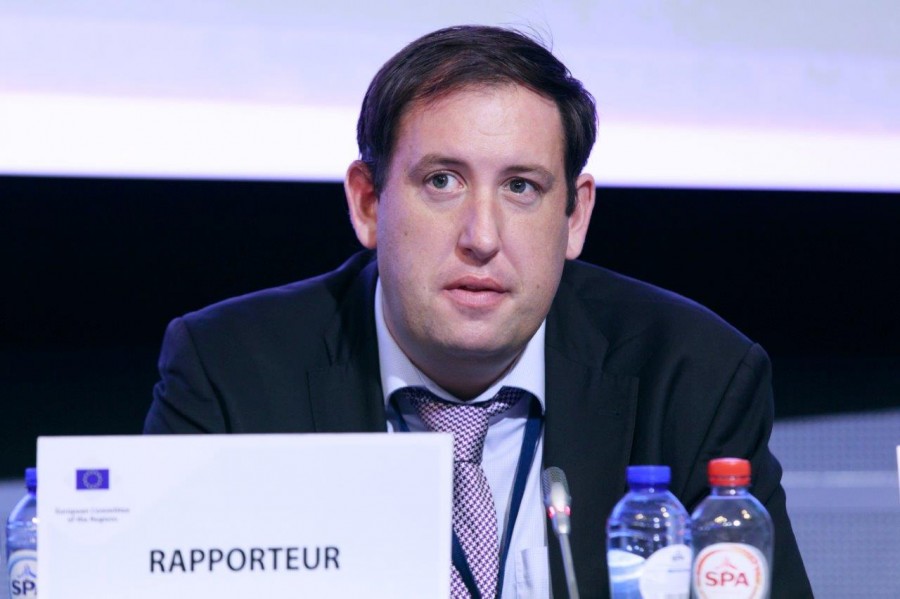 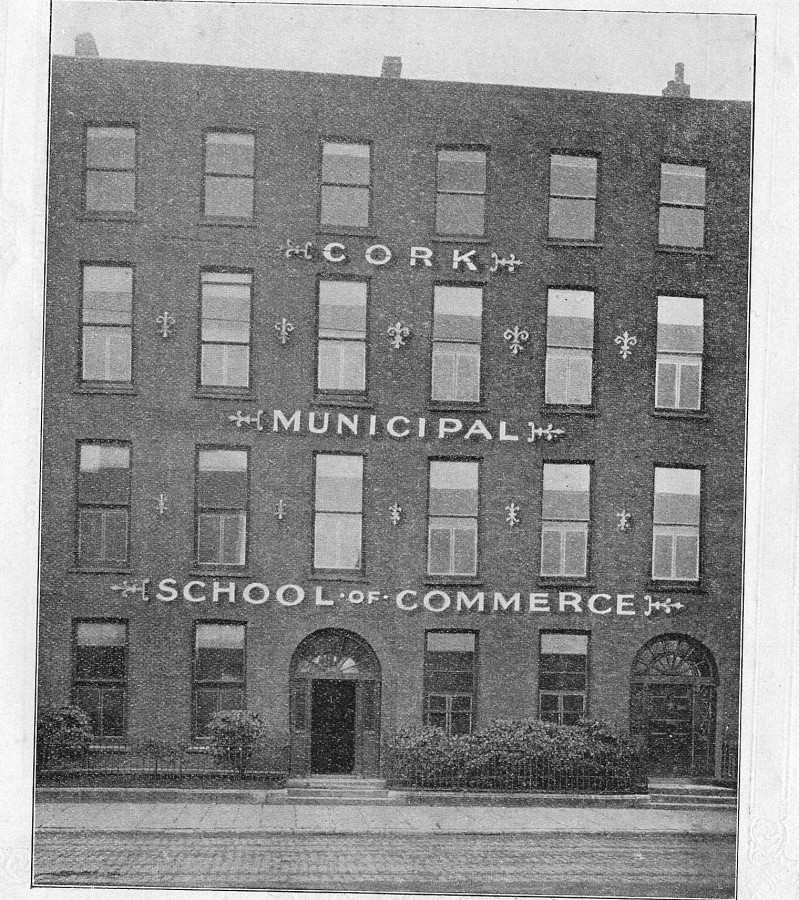 The Wheels of 1917: Prepare for the Jobs of the Future

To draw the attention of the Westminster Government to the great need for the provision of increased funds for technical instruction in Ireland, a public meeting was held on 31 October 1917 in the Council Chamber in Cork City Hall. The outcome of the debate was recorded in the Cork Examiner the following day. The general calls made were similar to calls in Irish society today for a focus on creating the jobs of the future and that an educational system be put into place to prepare students for them.

At the meeting Lord Mayor T C Butterfield presided, and the large attendance included Bishop Cohalan, UCC President Sir Bertram Windle. M Healy MP, E Crean, the City High Sheriff, and Arthur Sharman Crawford. The Lord Mayor noted it was essential that they should be prepared for conditions after the war, and that it was necessary for them to be “up and doing, and not to be caught napping”. To him technical education was one of the essentials to which the youth of Ireland would need to prepare for and meet after the war concluded. It was therefore necessary for them to get an increased grant from the Government for the purpose of technical education.

Sir Bertram Windle of UCC spoke and wished to remind the Westminster Government of the fact that the local authorities in Ireland voluntarily raised rates for the maintenance of the technical instruction schemes. He based his demand for extra funding not only upon the right of Ireland to an equivalent to the increased expenditure on education in England and Scotland, but also upon the fact, that technical education in Ireland had advanced so rapidly since its inception. Windle stressed that it had long since outgrown its original endowment, which had been actually reduced since the commencement, of the war. In addition to the existing grants, he strongly appealed for the active cooperation of the public bodies and public representatives in bringing pressure to bear on the Government to secure for technical education in Ireland the funds required.

Arthur Sharman Crawford, Vice-Chairman of the Borough Technical Committee, remarked on the success of the Crawford Municipal Technical Institute but there was a need for more technical education colleges. He highlighted that the School of Commerce, which began in Cork in 1908 at the Cork School of Commerce on Jameson Row on the South Mall, held its classes in premises totally unfit for its 500 students. The rooms were few, small, and quite unsuited for class purposes. He deemed it essential that the Chamber of Commerce must offer full and adequate day courses of instruction in commerce. A new building was urgently necessary for the development of commercial education. He highlighted that the School of Art was built by a private individual, and was, therefore, the only one of the city’s four school’s that was free of a charge for loans or rent. The extension of day trades preparatory instruction was clearly necessary. Cork had an excellent day trades school at the North Monastery, but another school was urgently required in view of the industrial developments such as the Ford plant that were taking place He noted that the Technical Institute had apprentice classes, workshops and laboratories in the daytime but night course could also be run there. However, a lack of funds limited this vision.

According to Mr Sharman Crawford, teachers should be properly prepared for their work through special training, such as that given in the Irish Training School, and he claimed that an extension of this work was urgently necessary. He appealed for the creation of a central bureau where manufacturers and trader, could chat with experts on difficulties of production and marketing. It was necessary that teachers should be experts in their respective branches. He requested that teaching posts should have a sufficient salary attached to them. He argued that in many cases their training encompassed long and expensive course of education. He noted; “To attract these teachers the present rates, of remuneration are entirely inadequate. It is absolutely necessary, if the right type of teacher and officer is to be secured; that there should be a guarantee of pension in reward for-services rendered during the best years of their lives”.

In a Cork Chamber of Commerce publication entitled Cork: Its Trade and Commerce (published in 1919), commercial classes began in Cork in 1908 at the Cork School of Commerce on Jameson Row on the South Mall and these were given to 550 students. The business methods department was particularly well equipped containing the latest filling systems, duplicating apparatus, specimens of various types of loose leaf ledgers, and other examples of modern saving appliances.

919a. Cork School of Commerce as pictured in 1919 on Jameson Row, South Mall (source: Cork: Its Trade and Commerce available in Cork City Library) 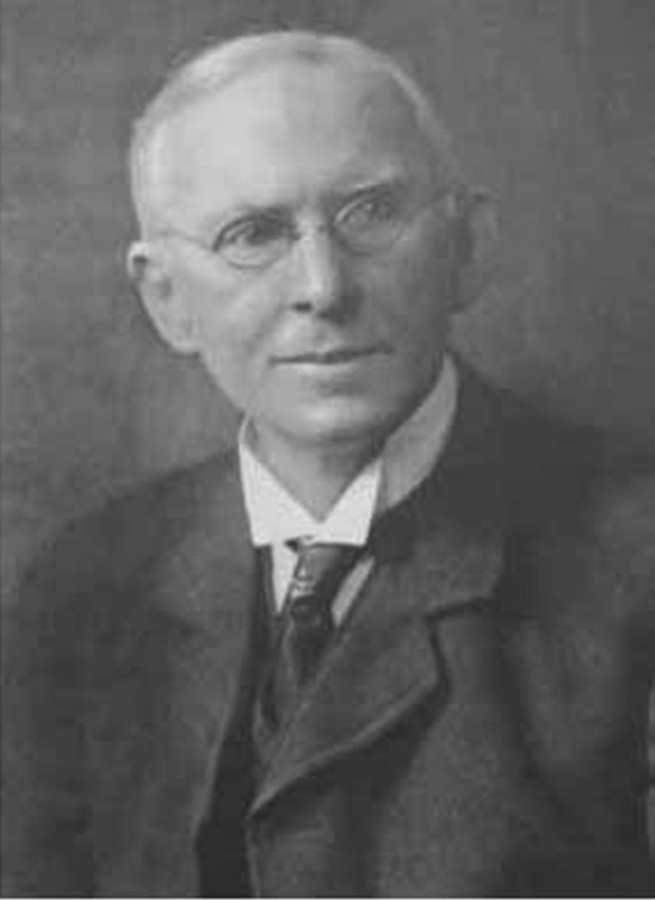 Pictures from the Dragon of Shandon, 31 October 2017 – another really super spectacle by the organisers, Cork Community Art Link. 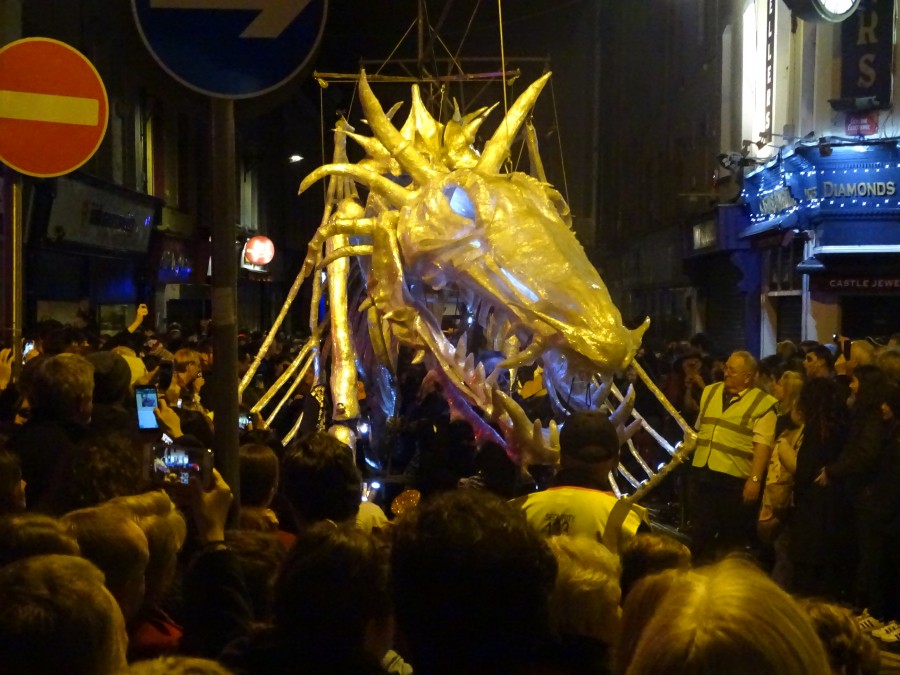 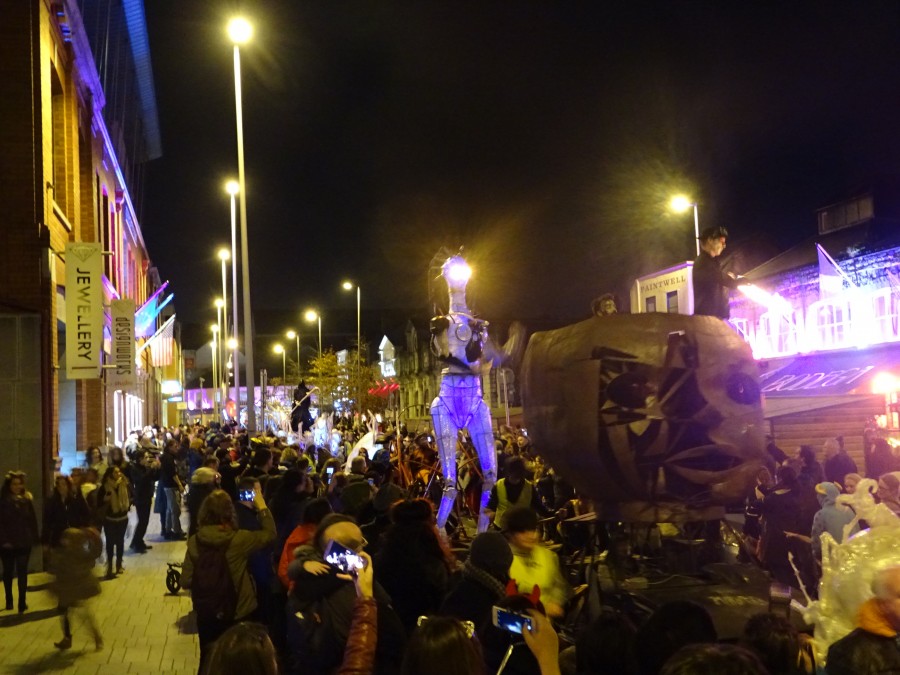 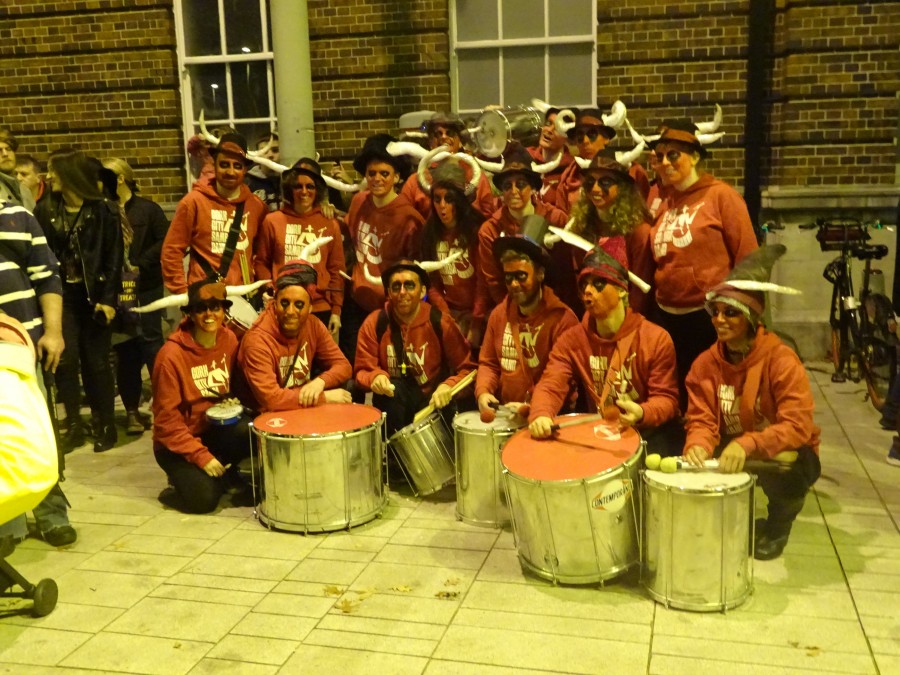 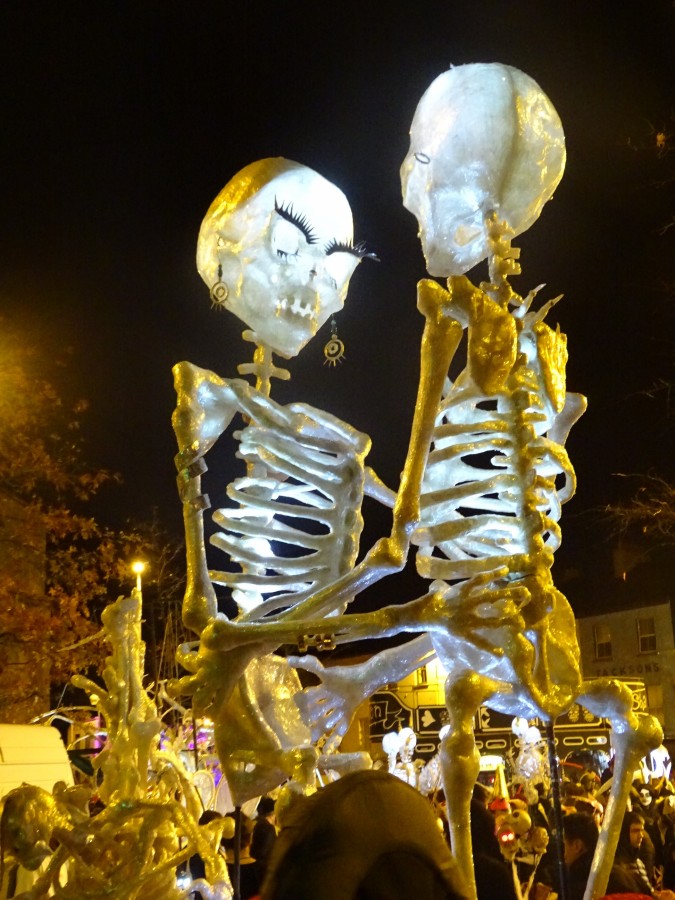 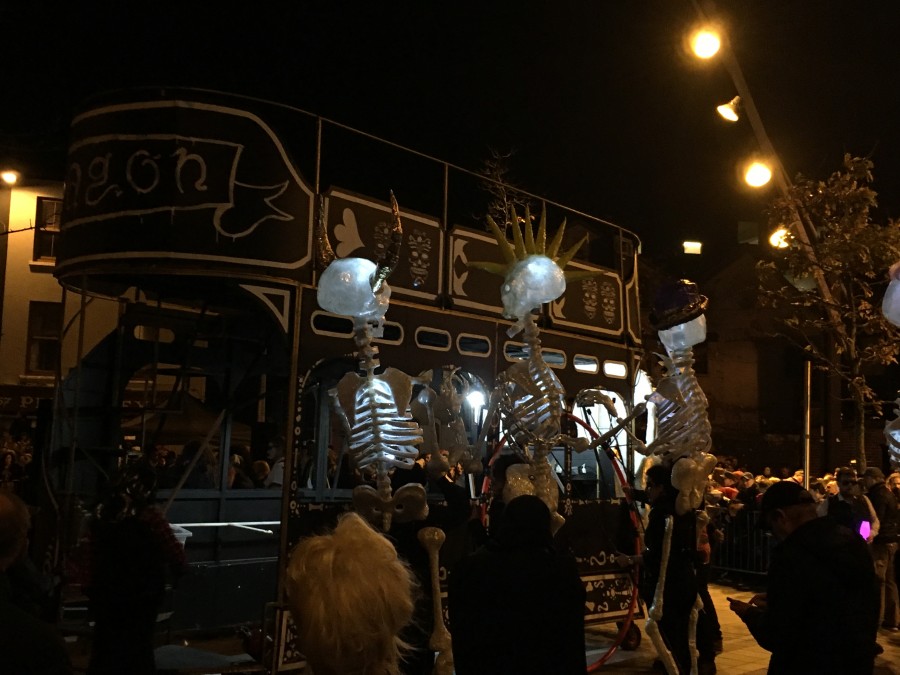 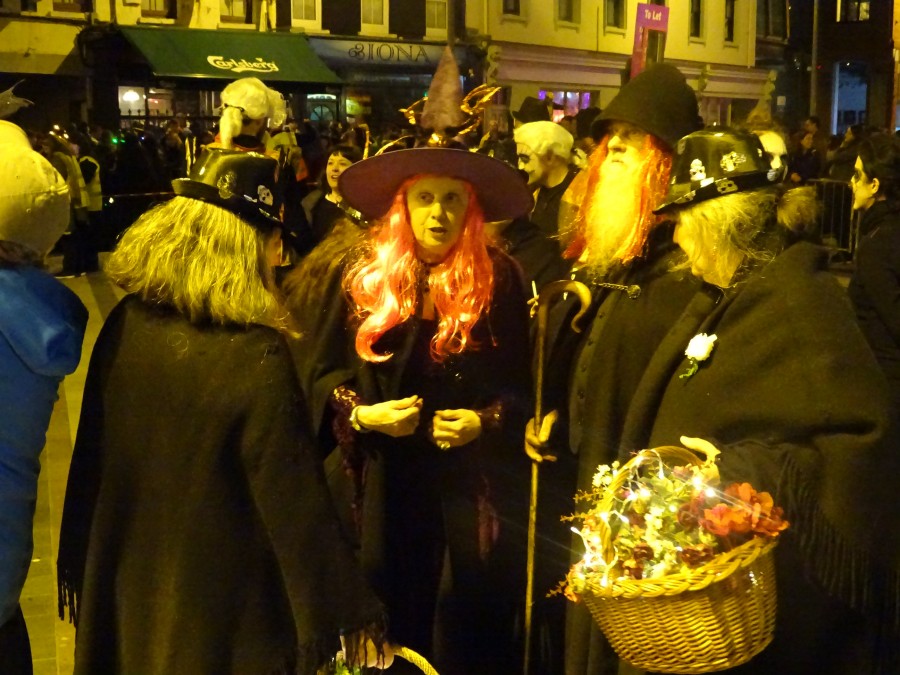 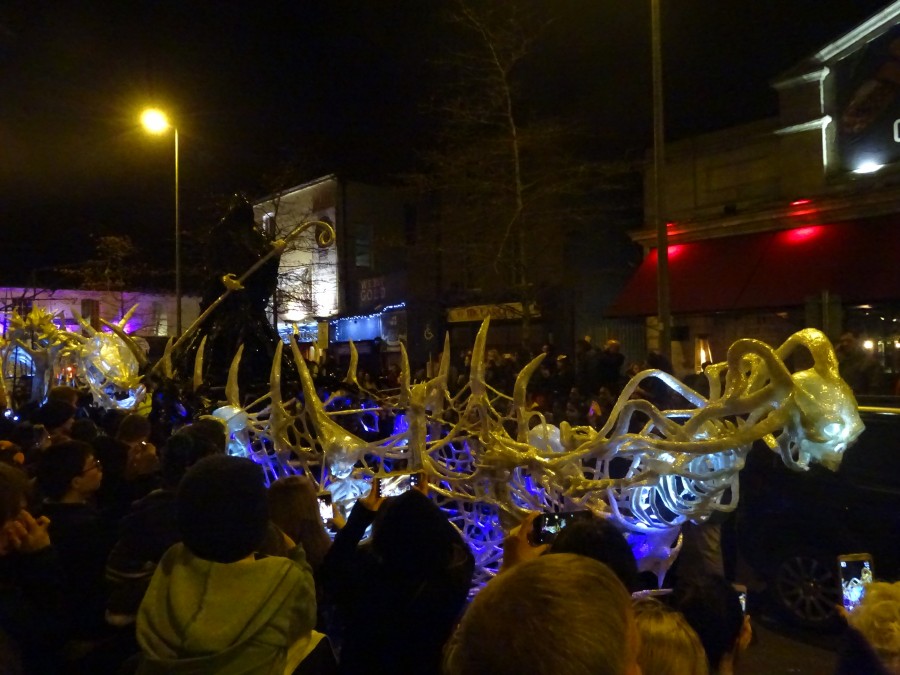 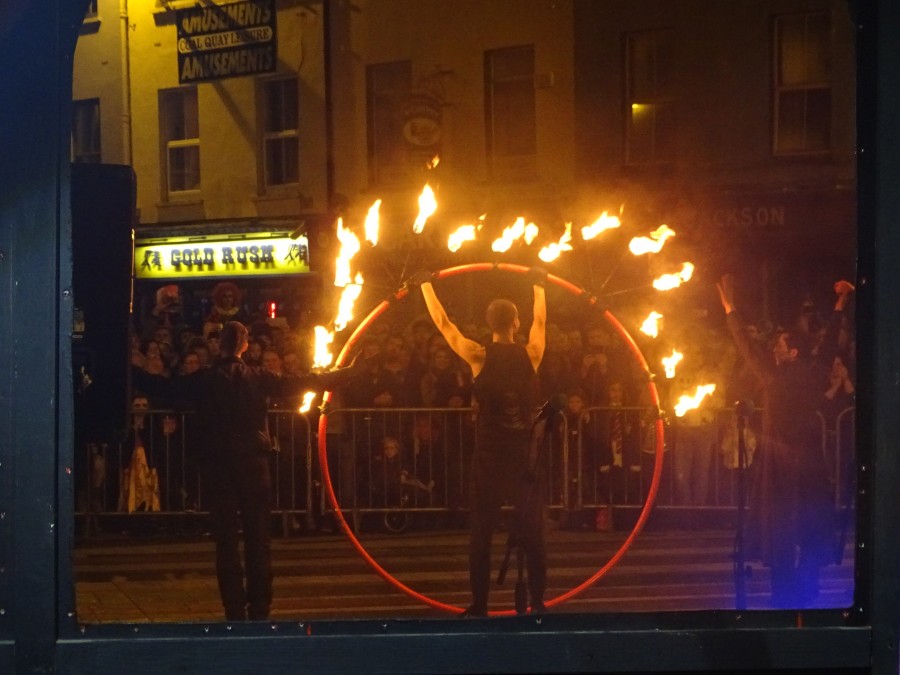 Local historian and Independent Cllr Kieran McCarthy has described Daly’s Bridge or the Shaky Bridge as a significant cultural asset and has called for repairs to its fabric to be fast-tracked. Cllr McCarthy got reassurance from the Director of Roads, Gerry O’Beirne, at the recent Cork City Council meeting that “the bridge is safe for pedestrians”.

Cllr McCarthy noted: “The bridge affectionately called the Shaky bridge is an important historical and national asset and needs continued maintenance due to its engineering fabric. For too many years, this bridge has not seen any investment into its fabric. The bridge is celebrating its 90th birthday this year. The bridge in 1927 was a co-funded project between Cork Corporation and James Daly who was a butter merchant in the city. The bridge is of a suspension type, which is supported at intervals across the river with the aid of anchored cables, which need annual maintenance. The building contract in 1926/27 was awarded to a famous London based steel company owned by David R Bell”.

Cork City Council recently made an application funding to the Department of Transport, Tourism and Sport for the repair and rehabilitation of Daly’s Bridge as part of the annual application process. An assessment of Daly’s Bridge was undertaken in December 2016 by an external Consultant Engineering firm with grant funding from the Department of Transport Tourism and Sport. The assessment established the nature and extent of the repair and rehabilitation works required. The information gathered was subsequently used to develop an initial design for the necessary works.

Cllr McCarthy continued; “The bridge is currently the subject of planned inspection following recent severe weather related closure from Friday 20 to Wednesday 25 October. The updated information gathered will be submitted in support of the funding application. Subject to grant approval, rehabilitation works could commence in April 2018. The Department of Transport Tourism and Sport have funded extensive repair/renewal works for a number of bridges in recent years including Clontarf Bridge and Curaheen Bridge. It is important we get funding to repair our great and historic Shaky Bridge”.