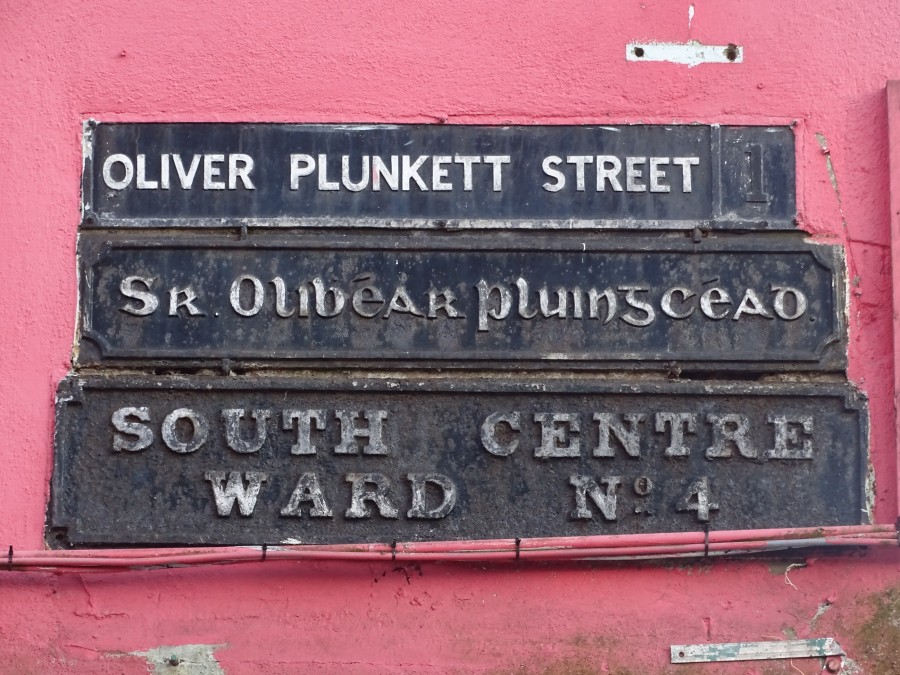 At the meeting of Council of Cork Corporation on 14 May 1920, Lord Mayor Terence MacSwiney presided. On the agenda was a discussion on the beatification of Oliver Plunkett headed up by Sinn Féin councillors. A number of decisions arose out of it. One of the principal ones was the proposal by Cllr Micheal O’Cuill that the name or George’s Street be changed to that of Sráid Olibhéir Phluingcéid (Oliver Plunkett street), and this was seconded by Cllr Seán O’Leary and passed unanimously. This change in name just came within a month of the change from (Robert) King Street to MacCurtain Street.

Renaming streets was a very symbolic act and another mechanism to breaking bonds with the British Empire. George’s Street, was laid out from 1715 onwards and was named to celebrate the House of Hanover. Its side streets are named after different colonial historical figures. Such names promoted British imperial remembering structures within the city.

Oliver Plunkett (1625-1681) was linked to martyrdom and suppression and was an idea candidate to commemorate within a street name. Oliver was born at Loughcrew, near Old Castle, Co. Meath in 1625. Up to the age of sixteen he was educated by Dr Patrick Plunkett, Abbot of St Mary’s Dublin. Subsequently he studied for the priesthood at the Irish College, Rome. He was ordained in 1654 and acted as agent in Rome for the Irish Bishops. In 1669 he was appointed to the Archbishopric of Armagh. In 1670 be returned to Ireland and established a Jesuit College in Drogheda in 1670. In 1679 he was arrested on a charge of high treason, which was supported by the evidence of witnesses who came forward to prove a Popish or Roman Catholic plot to kill England’s King Charles II. The King did not believe in the conspiracy and refused to get involved in the case of Oliver, and the law was allowed to take its course.

Brought to Westminster before an all Protestant jury, during the first trial, Oliver disputed the right of the court to try him in England. He was found to have pursued no crime but was not released. During the second trial, he drew focus on the criminal background of some of the witnesses, but to no avail. Found guilty Oliver was hanged, drawn, and quartered at Tyburn on 1 July 1681, aged 55. He was the last Catholic martyr to die in England. His story of a miscarriage of justice was not forgotten about in and was harnessed in many subsequent debates from condemning the Penal Laws to calling for Catholic Emancipation in the early nineteenth century.

Fast forward to 1920 nationally the story of the miscarriage of justice of Oliver Plunkett was connected to the war for Independence and in a Cork context to the murder of Tomás MacCurtain and his ongoing memorialisation. At the Cork Corporation Council meeting of 14 May 1920 this latter connection is seen through Sinn Féin’s Cllr Professor Alfred O’Rahilly, who proposed: “We, the Corporation of Cork, in Council assembled, hereby record the joy and satisfaction of the people of Ireland at the approaching Beatification of the Venerable Oliver Plunkett, the martyred Archbishop of Armagh, who 239 years ago, as the victim of a bogus plot, was seized and deported by the English Forces then in Ireland, and was legally murdered as a criminal and a traitor. We direct that this resolution be forwarded to the Cardinal Secretary of State, to his Eminence Cardinal Logue, to his Grace Dr Harty, Archbishop of Cashel, and to his Lordship Dr Cohalan, Bishop of Cork”.

Lord Mayor MacSwiney proposed that a deputation of four be appointed to go to Rome on the occasion of the Beatification. The City Solicitor pointed out that the Corporation could not pay the expense of the deputation. The Lord Mayor expressed his understanding of the financial position. However, the resolution appointing the councillor deputation was passed, and the following were appointed – Lord Mayor, Professor Stockley, Messrs Donal O’Callaghan, and Simon Daly.

The Lord Mayor further noted he understood that to proceed to Rome they needed passports. He tried to get passports direct from the Italian Government but could not. He also understood that he would have to the nearest police barrack – and in this case that would be King Street. This was not a journey he wished to make especially after the focus placed on it during the inquest of Tomás MacCurtain.

Cllr O’Callaghan. speaking in Irish, suggested that the four members of the deputation proceed as far as they could go without passports. Alderman Edmund Coughlan seconded, and the suggestion was adopted. The passports though were not received by the proposed delegation nor did they travel some of the way to Rome.

To mark the Beatification of Oliver Plunkett in Rome on 14 May 1920, Bishop Cohalan celebrated high mass at the North Cathedral where Lord Mayor MacSwiney and councillors were present. In all the churches of the city after Mass at noon the Blessed Sacrament was exposed on the High Altar.

Twenty-four hours previously, the Lord Mayor sent out a public call to citizens to illuminate their houses and display flags and bunting to commemorate the historic and holy event. On 14 May 1920 rows of houses in whole streets were all lit up. Statues and pictorial representations of the Sacred Heart were erected inside the windows and surrounded by vari-coloured lights, the Papal colours – gold and white – predominated. The Papal Flag was displayed from very many homes. The Sinn Féin flag flew over public buildings, such as the City Hall, the Markets, and was also hoisted over the Courthouse in Washington Street. The latter flag was put up in the morning by some young men with the aid of the fire escape outside the Court House. A demonstration was made in the evening by the members of the Irish Trades and General Workers Union whose hall at Camden Quay was beautifully decorated. Accompanied by the Connolly Memorial Fife and Drum Band, the Union members of well over one thousand left the hall and proceeded to Blackpool Bridge. Here a halt was made to pay tribute to the memory of the late Lord Mayor, Alderman Tomás MacCurtain. The band played outside his residence for some time. All of this happened as Black and Tans loomed more and more in making their presence felt. 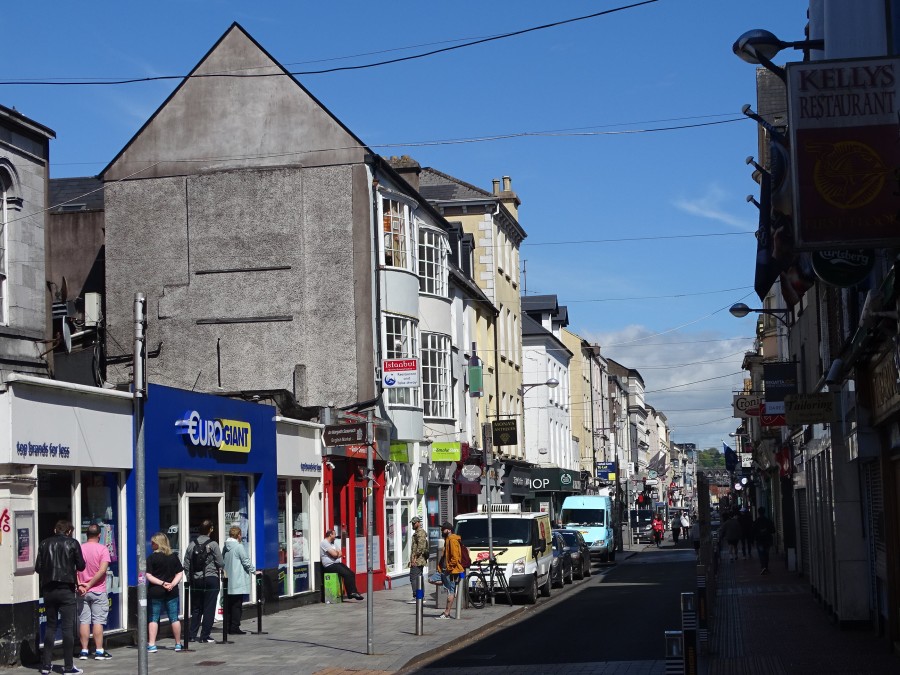